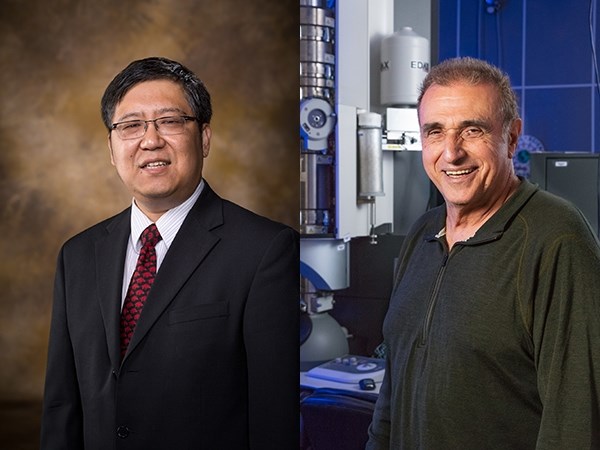 FAYETTEVILLE, Ark. – Military aircraft, missile tracking systems and ground troops who rely on night-vision systems could benefit from a new generation of infrared imaging devices made with a powerful semiconducting material developed by University of Arkansas researchers and their colleagues at several institutions.

Shui-Qing “Fisher” Yu, associate professor of electrical engineering, and Gregory Salamo, Distinguished Professor of physics, have received a $7.5 million award from the U.S. Department of Defense, as part of its Multidisciplinary University Research Initiative, or MURI. Yu, as principal investigator, and Salamo, as co-principal investigator, will lead a multi-disciplinary and multi-institutional team of researchers who will design, fabricate and test infrared detectors made with silicon germanium tin.

“This is a significant award – the first MURI with the University of Arkansas as the lead institution,” said Dan Sui, vice chancellor for research and innovation. “Fisher has dedicated most of his career to an investigation of this powerful material and its potential as a promising new semiconductor. So, I’m happy for him, but I’m also extremely excited that this work is happening here, on our campus. It is yet another demonstration of this university’s contribution to improving systems that make our world better.”

Infrared imaging technologies are used by the military for night vision systems. They currently rely on semiconducting alloys such as mercury cadmium telluride and other material-based photodetectors. These have several limitations, including a complex and expensive manufacturing process, low production yield and poor uniformity over large areas. These limitations have a negative impact on wide-range infrared visibility, especially in areas with poor environmental conditions.

To address these limitations, the Department of Defense granted the MURI award to Yu, Salamo and a team of researchers from Arizona State University, Dartmouth College, University of Massachusetts – Boston and George Washington University. The researchers will investigate using silicon germanium tin alloys for lighter, faster and more energy-efficient infrared imaging devices with a higher signal-to-noise quality. The researchers’ goal is to build systems that can be manufactured at a lower cost, compared to the current generation of infrared imaging technology.

Yu has worked with silicon germanium tin for more than a decade. His research has demonstrated the material’s efficacy as a powerful semiconducting alloy that can be integrated into electronic circuits. In 2016, he and colleagues reported the fabrication of a first-generation, “optically pumped” laser, meaning the material was injected with light, similar to an injection of electrical current. Since then, the researchers have been refining the material, which could be used in the development of lightweight, compact and low-power-consuming electronic components that use light for information transmission and sensing.

In 2018, Yu was awarded three Air Force grants totaling $1.5 million to develop optically pumped germanium tin lasers and to study how to use germanium tin as a platform for optical signal processing.

Yu and Salamo said the impact of this research extends beyond military applications and could improve imaging systems used in health care, meteorology and climatology, surveillance and autonomous systems such as self-driving vehicles.

The Defense Department’s MURI program started in 1985 and is jointly sponsored by the Army Research Office, the Air Force Office of Scientific Research and the Office of Naval Research. It is an annual competition designed to address the Defense Department’s complex challenges that do not lie within a single discipline. MURI awards are highly competitive and prestigious. This is the first time the University of Arkansas is the leading institution on a MURI award.