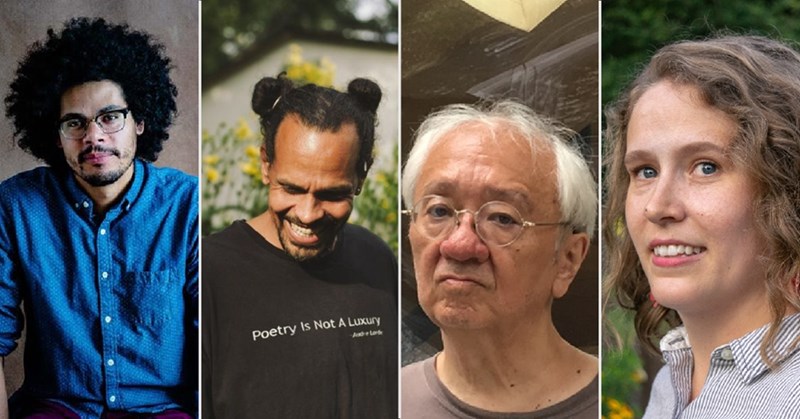 FAYETTEVILLE, Ark. – The Open Mouth Reading Series invites poetry lovers of all ages to attend a public reading at 6:30 p.m. Friday, Sept. 6, at the Fayetteville Public Library. The reading will feature award-winning poets Geffrey Davis, Ross Gay, John Yau, and Gwendolyn Ann Hill. This event is free and open to the public.

Reading attendees are invited to join Open Mouth at ArtVentures at 9 p.m. for a reception celebrating the book launch of Night Angler (BOA Editions) by Geffrey Davis. Books will be available for purchase at both reading and reception.

Named a finalist for the Hurston/Wright Legacy Award, Davis has received the Anne Halley Poetry Prize, the Dogwood Prize in Poetry, and the Wabash Prize for Poetry, as well as fellowships from Bread Loaf, Cave Canem, the National Endowment for the Arts, the Vermont Studio Center, and the Whiting Foundation. His words have appeared in Crazyhorse​, ​Massachusetts Review, Mississippi Review, New England Review, ​New York Times Magazine, The New Yorker, PBS NewsHour, Ploughshares, Poetry Northwest, and elsewhere.

​A native of the Pacific Northwest, Davis lives with his family in Fayetteville. He teaches at the University of Arkansas and with The Rainier Writing Workshop, Pacific Lutheran's low-residency M.F.A. program. Davis also serves as poetry editor for Iron Horse Literary Review.

Ross Gay is the author of three books of poetry: Against Which; Bringing the Shovel Down; and Catalog of Unabashed Gratitude, winner of the 2015 National Book Critics Circle Award and the 2016 Kingsley Tufts Poetry Award. His collection of essays, The Book of Delights, was released by Algonquin Books in 2019.

Gay is the also the co-author of two chapbooks, Lace and Pyrite: Letters from Two Gardens,  (with Aimee Nezhukumatathil), and River (with Richard Wehrenberg Jr.). In addition to his work as an editor, Gay is a founding board member of the Bloomington Community Orchard, a non-profit, free-fruit-for-all food justice and joy project. He has received fellowships from Cave Canem, the Bread Loaf Writer's Conference, and the Guggenheim Foundation. Ross teaches at Indiana University.

John Yau is poet and critic. His recent books include a selection of essays, The Wild Children of William Blake (Autonomedia, 2017), the monographs Thomas Nozkowski (Lund Humphries, 2017) and Philip Taaffe (Lund Humphries, 2018), and a book of poetry, Bijoux in the Dark (Letter Machine Editions, 2018). His reviews and criticism appear in the online magazine, Hyperallergic Weekend. In 2018, he was awarded the Jackson Poetry Prize, which is awarded annually by Poets & Writers to an American poet of exceptional talent who deserves wider recognition. He lives in New York City.

Gwendolyn Ann Hill, originally from Iowa City, Iowa, is the recipient of an Academy of American Poets Prize. Her work has been supported by the Bread Loaf Environmental Writers' Conference and the University of Arkansas, where she is currently an MFA candidate. Her poems appear in POETS.org, Prairie Schooner, and Narrative.