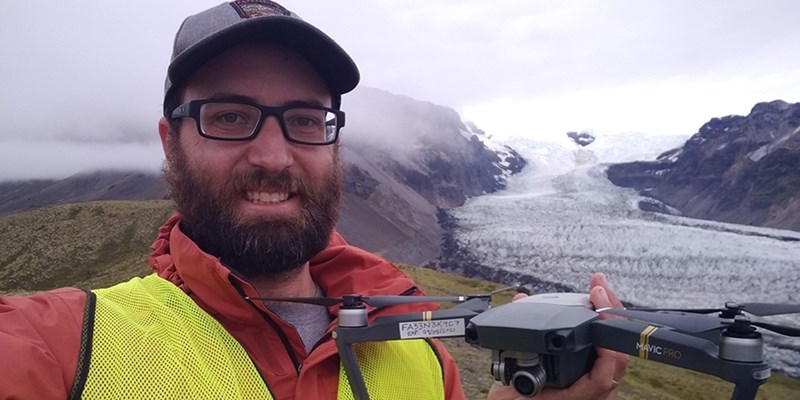 Paul Knightly prepares a drone for flight in Iceland.

Iceland is a lot like Mars in some ways. Both are polar deserts that have landscapes shaped by volcanism and ice. The island nation makes a good analogue for scientists studying surface features of the red planet.

That's what drew Paul Knightly, a doctoral candidate at the Arkansas Center for Space and Planetary Sciences, to Iceland this summer. Knightly is studying features called patterned ground, which are geometric shapes formed by freezing and thawing of the soil in periglacial regions. The unique features can be found in Iceland's interior and on the surface of Mars, but Iceland is easier to get to.

"They come in a wide variety of forms, but what I am specifically looking for are sorted circles, and then some larger polygonal shapes that have also been identified on Mars," said Knightly.

Knightly conducted 35 drone survey flights over a period of eight days at various sites across Iceland, examining patterned ground, polygonal terrain, and both active and relic glacial moraines. Next he'll compare his findings to patterned ground seen on Mars. The research was funded by Europlanet, a consortium of European space and planetary scientists.

"The outstanding question for patterned ground on Mars is how old is it, which would be able to tell us if it is a process that is still ongoing," he said. "It is too cold on Mars to see the same freezing and thawing cycles we have on Earth, so I'm hoping the results from this study will provide insight into how and when the patterned ground came about."