U of A Funds Summer School Sessions to Boost English, Academic Learning 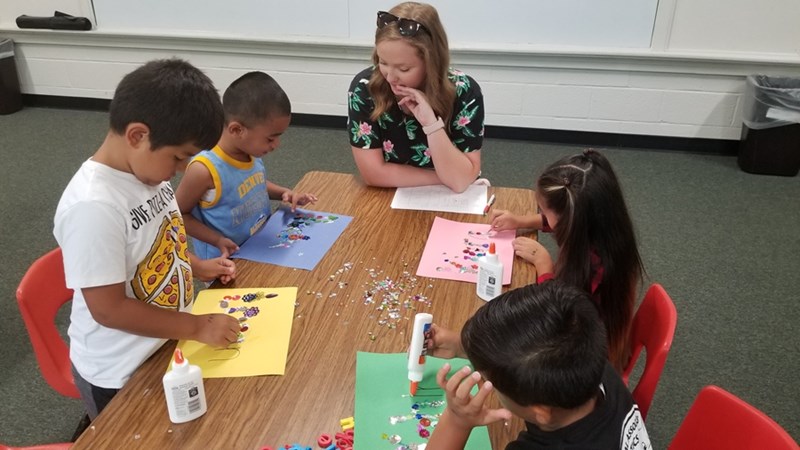 Elementary and middle school students who speak English as a second language got a big math and literacy boost this summer at a University of Arkansas-funded camp.

Over 250 Springdale students, ranging from pre-kindergarten age to rising seventh-graders, received language learning support in addition to the content curriculum.

This was the second year for current Springdale School District teachers - and those about to start teaching - to work with students at camp.

The inservice and preservice teachers made sure the two-week camp was not only helpful, but fun.

Before camp got underway this summer, parents attended a preliminary session focused on what to expect. They received bags of books in English, Spanish and Marshallese, journals and ideas for activities so they could work at home with their children attending summer school, along with siblings and cousins. Translators were available at the schools to help parents understand.

A bonus benefit of the camp was to familiarize students with their schools before the first day of classes. Camps were held in the schools that students will attend for the first time this year, including young children who are heading into kindergarten and those starting middle school.

"It was a confidence builder," said Trish Lopez, a research associate with Project CONNECT at the U of A. Students were able to see their classrooms, meet their principals and even work with the teachers they'll have this fall, she said.

The two-week summer schools were at Lee Elementary, Monitor Elementary and J. O. Kelly Middle School, all in the Springdale School District. Camps were held at only two locations last year.

"Teachers who just graduated from the U of A taught at the camp and can take what they learned and apply it in their classrooms this year," Lopez said.

Shelly McKeever, director of Project SOAR at the U of A, said students were invited to attend the camp based on their reading levels from data collected via standardized tests last winter and spring. She said they'll look at the students' scores this fall to evaluate the success of the grant-funded summer school.

McKeever noted that the additional language skills will also give students a leg up for this school year. The sessions focused on children who are progressing as English language learners, but not yet proficient, she said.

Project CONNECT and Project SOAR are funded through National Professional Development Grants from the Office of English Language Acquisition. Directors at each of the U of A programs coordinated summer camp sessions under the direction of Janet Penner-Williams, an associate professor of English as a Second Language (ESL). Penner-Williams received two five-year grants of about $2.7 million each in 2017 from the U.S. Department of Education to increase the number of educators prepared to teach English language learners in Arkansas schools.

Penner-Williams partnered with the Springdale School District and the Arkansas Department of Education. In addition to the outreach efforts for parent, family and community engagement, the grants pay for a limited number of Springdale teachers and U of A students to take courses to add the English as a second language endorsement or complete a new 15-credit-hour graduate certificate in Teaching English to Speakers of Other Languages.