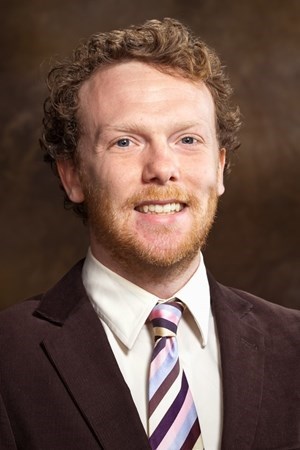 Joshua Byron Smith, associate professor of English at the University of Arkansas, was recently invited to give a guest lecture at Harvard University on the topic of Celtic literature.

Smith's talk, titled "Fictional Old Books in Medieval Ireland and Wales," focused upon the medieval Irish text Acallam na Senórach, the Welsh poem Cadair Ceridwen, and a few others. His talk examined the widespread literary trope of claiming a fictional old book as a source in the medieval British Isles.

Audience members included Harvard faculty and students, and members of the public.

The Mahindra Humanities Center promotes various forms of interdisciplinary discussion, on a range of scholarly topics, to encourage "collaborations between the humanities, social sciences, and sciences in the belief that the humanities make a unique contribution in establishing -- through interpretation and conversation -- communities of interest and climates of opinion."

Smith, who teaches undergraduate and graduate courses in the Department of English on Beowulf, medieval languages, literature of the first English empire, and heroes and monsters of the North Sea, is the author of Walter Map and the Matter of Britain (2017).