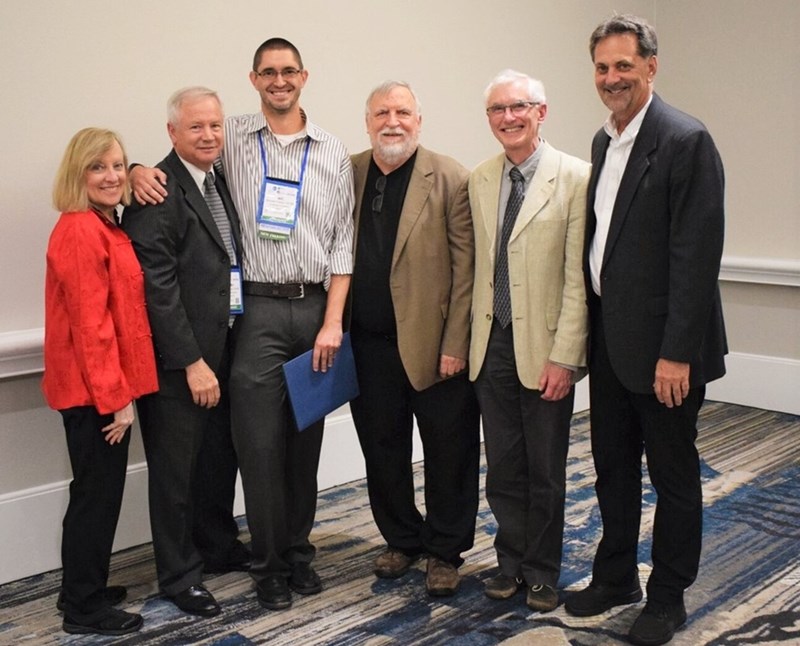 Nic Greene (third from left) beside his mentor, Larry Durstine, and ACSM past presidents

Nic Greene, an associate professor in exercise science at the University of Arkansas, was recently inducted as a Fellow into the American College of Sports Medicine (ACSM).

"It's a big deal to be named a Fellow," said Matthew Ganio, head of the department of Health, Human Performance and Research. With more than 50,000 members and certified professionals in its ranks, ACSM represents more than 70 occupations in sports medicine and exercise science. You won't find a broader view of the profession."

The College has been very important to Greene since his time as a student at South Carolina and Texas A&M where mentors Larry Durstine -- former ACSM president -- and Steve Crouse, respectively, imparted the important role of the College in advancing exercise sciences and exercise medicine on him.

Greene is also the director of the Integrative Muscle Metabolism Laboratory in the Exercise Science Research Center at the U of A.

ACSM Fellowship is an elite member status for long-term professional members who have provided significant service to ACSM. These members have also demonstrated high standards of professional development and commitment to the goals and long‑range activities of the College.

Greene first joined ACSM when he completed what was formerly known as ACSM's Health Fitness Instructor certification in the early 2000s.

Greene has also been a member of several regional chapters: 2006-2010 with the Texas Chapter while at Texas A&M; 2010-2013 with the Southeast Chapter while a postdoctoral fellow at Virginia; and 2013 to present with the Central States Chapter since arriving at the U of A.

"In that time in most years I have presented posters or short talks at the annual meeting of the College," he said. "In the last couple of years I chaired a symposium at the 2018 meeting in Minneapolis on Novel Aspects to Muscle Wasting.

In 2018 Greene joined the ACSM's Research Awards Committee which oversees review and award of the College's Tipton Student Research Award, New Investigator Award and Visiting Scholar Award. He has also served as a reviewer on multiple occasions for the ACSM's flagship journal Medicine and Science in Sports and Exercise.

"As a Fellow member, I anticipate enhancing my role at the ACSM through committee membership and leadership, chairing of sessions at the annual meeting and more," he said.

Greene started working at the U of A in fall 2013 and was recently named associate professor. He said he was drawn to the U of A, and Northwest Arkansas in general, for a few reasons.

"Specifically, UA brought a few things that were very appealing to me," he said. "The Exercise Science program here has been recognized by field leaders and mentors of my own as a rising program in our field," he said. "The increased efforts toward research on the UA campus were appealing to me in finding an environment that sought to support a part of the work that is very important to me."

Greene said he's grateful to have the opportunity to work with Tyrone Washington, an associate professor HHPR. He's known Washington since they were both students at the University of South Carolina in the early 2000s.

"Dr. Washington is someone I have long counted as a friend and someone I knew I could work with to really move both of our work forward," Greene said. "Additionally, Fayetteville and Northwest Arkansas has a number of features in lifestyle that were very important for me and my family."

Greene's research in the Integrative Muscle Metabolism Laboratory right now is primarily focused on studying mechanisms of onset in muscle wasting disorders such as disuse and cancer cachexia -- cancer-induced wasting.

"These lines of work are especially important as development of muscle wasting is a major indicator of poor treatment outcomes in multiple diseases and in the case of cancer cachexia we know that depending on type of cancer, 20 to 40 percent of cancer-related deaths are attributable to cachexia while as many as 80% of patients undergo some degree of cachexia."

Greene said the wasting associated with cancer makes treatments difficult as many of the treatments for cancer are especially difficult on the total body. Maintaining the rest of body health is critical to successful treatment, he said.

"For most muscle wasting disorders we do not have good preventive therapies," he added. "As an exercise scientist a very important aspect of exercise medicine is in prevention. We are trying to find the mechanisms of onset in muscle wasting conditions so that we can identify best strategies to prevent muscle wasting."