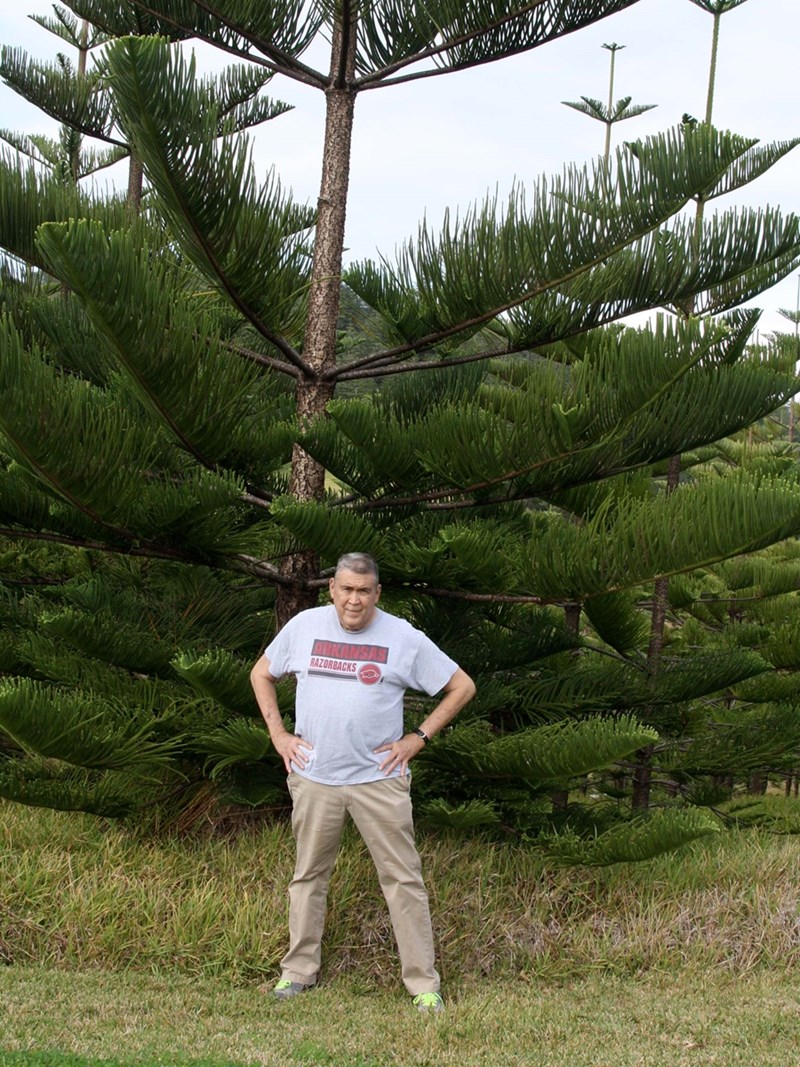 Steve Stephenson in front of a Norfolk Island pine.

Norfolk Island is an isolated island in the South Pacific located between New Zealand and Australia. The island is quite small, with a total area of only about 14 square miles. Norfolk Island is known for two things. First, it is the native habitat for a tree known as the Norfolk Island pine, which is widely planted throughout subtropical and tropical areas of the world. Second, the descendants of the Tahitians and the mutineers from the HMS Bounty (from the famous incident referred to as "mutiny on the Bounty") were resettled on Norfolk Island from Pitcairn Island in 1856.

The first known inhabitants of Norfolk Island were Polynesians, but they were not present when Captain James Cook "discovered" the island in 1774. Great Britain first settled Norfolk Island a few years later in 1788. The island served as a convict penal settlement during much of the period between 1788 and the middle of the 19th century. At the present time, the population of the island is approximately 1,700, and the largest town is named Burnt Pine.

Steve Stephenson, a research professor in the Department of Biological Sciences, and his wife Barbara, an instructor in the Department of Mathematical Sciences, spent two weeks on Norfolk Island in June. The purpose of their visit was to survey for myxomycetes (commonly referred to as slime molds). No previous survey for this group of fungus-like organisms had been carried out on the island.

Stephenson has been interested in long-distance dispersal and the biogeography of myxomycetes on isolated islands, and previous expeditions have taken him to Macquarie Island in the Southern Ocean, Ascension Island in the Atlantic Ocean, and Christmas Island in the Indian Ocean.

Stephenson's studies of myxomycetes over the past 40 years have taken him to all seven continents, and he has collected these organisms in every major type of terrestrial ecosystem. He is the author or coauthor of thirteen books and more than 400 book chapters and papers published in scientific journals. Many of these deal with the distribution, ecology and biology of myxomycetes.