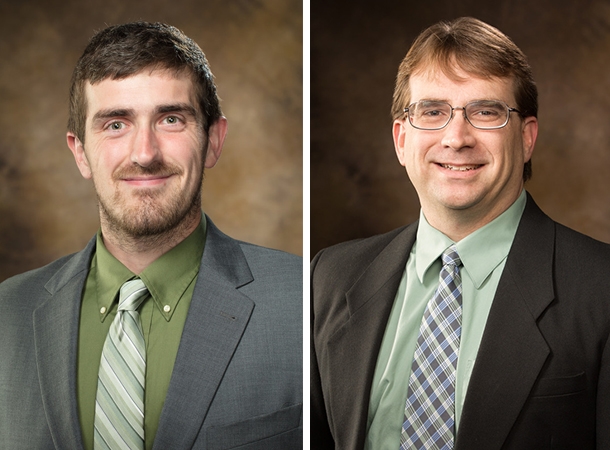 Jeff Dix, left, and Morgan Ware of the Department of Electrical Engineering.

Electrical engineering researchers have received funding from the U.S. Navy to develop technology that will prevent electronics from shutting down when in space or in high-radiation environments on Earth.

Although communication devices have advanced considerably in recent years, the latest communications technology doesn't have adequate radiation resistance for use in space or other high-radiation environments.

Dix will focus on integrated circuits, while Ware's research will concentrate on power electronics. Both research teams hope to fill the gap between what's currently available on the commercial market and what's needed to support state-of-the-art electronic components for the military.

Ware and his team will work to develop components that can operate continuously while exposed to high levels of radiation found in nuclear reactors, or as the result of a nuclear explosion.

His team will focus on enhancing a power transistor, known as a High Electron Mobility Transistor,& made of gallium nitride. Ware said gallium nitride has become a widely-used semiconductor for making efficient and compact power systems.

Usually, transistors control the flow of electricity by switching on or off, but when exposed to high-energy gamma rays from nuclear reactions, the device can lose its ability to switch.

"Interaction of these rays with electronics creates large amounts of excess free charges," Ware said, which could then cause the transistor to overheat.

The answer to this issue, Ware said, is to trap those extra charges in something called a quantum well.

Quantum wells are thin layers of charge-confining materials within the power device.

"We want to use this quantum well to trap and remove extra charges, which are unwanted and created as a direct result of the interaction with the radiation," Ware said.

Radiation-tolerant devices resulting from Ware's research will allow power subsystems to operate during exposure to radiation that would normally result in system failure.

Once the devices are ready, Ware and his team will send them& to the scientists at the Naval Surface Warfare Center-Crane Division in Crane, Indiana, to perform radiation testing.

Dix will work with Alan Mantooth, distinguished professor of electrical engineering and Twenty-First Century Research Leadership Chair in Engineering, to harden electronics that will be used in space.

Their goal is to create components that can better resist damage caused by ionizing radiation, which occurs from ionized particles from the sun or other celestial objects.

Ionizing particles can impact the electronics and cause harmful events like a spike in voltage that could destroy parts of the devices.

Dix's team will create new integrated circuit designs to extend the lifetime of electronics in space applications, such as satellites, and high-radiation environments on Earth, such as inside nuclear reactors.

"Our ability to send electronics into harsh environments enables us to explore new phenomena, safely monitor nuclear reactions and cost-effectively control industrial processes that are not possible otherwise," Mantooth said.

The team will design two components: an amplifier and a comparator, which will operate near a sensor. Those components will allow devices to analyze signals, which will then digitally process the information for the user to view.

Researchers will use radiation-hardened design techniques focused on two types of exposure: total-dose and single-event radiation.

The total dose is the amount of radiation a component can absorb over a certain amount of time. Single-event radiation protection protects electronics from one instance of ionized particles hitting the system and damaging the component.

"Putting technology that lasts longer into space is more economical and a more operationally effective way to do things," Dix said. "We're working to create a design that will keep working even after several generations of commercial technology have become obsolete."