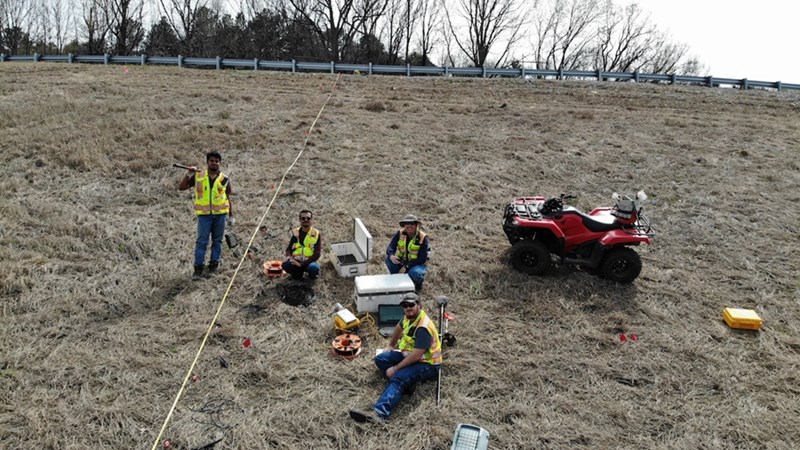 Clint Wood is pictured with graduate students Landon Woodfield, Salman Rahimi and Ashraf Himel as they work in Ozark, Arkansas.

FAYETTEVILLE, Ark. – A civil engineering faculty member has been honored by a leading national infrastructure organization for his work with technology and methods that enable highway planners to see what's under the ground before beginning construction. The technology helps keep projects on track and on-budget by better understanding subsurface conditions.

The research is being conducted for and in conjunction with the Arkansas Department of Transportation.

Wood's research centers on non-invasive seismic imaging, which sends stress waves into the ground and measures their response at the surface, similar to how ultrasounds image the human body.

The technique provides important information for highway designers and construction contractors, who typically rely on exploratory drilling to understand the subsurface conditions — a strategy that can miss changes between limited drilling locations.

"Designing on limited drilling results is like navigating with an incomplete map," Wood said. "You can make assumptions between the map pieces or in this case drilling results, but you could miss major features that impact your decisions. We're trying to fill in the gaps in the subsurface information in a faster and cheaper way than performing additional drilling."

The research focuses on two issues which departments of transportation often face: estimating the depth to and stiffness of bedrock for new highway alignments and understanding the subsurface condition which cause slope instability, particularly how water is moving through a slope. Unexpected changes in bedrock depth near slopes can also create pockets where water collects, which can cause the soil in the slope to become saturated, leading to instability.

Wood points to a section of Interstate 40 near Ozark as an example.

"There's a section along I-40 which has developed a number of large cracks in the roadway due to movement of the slope," he said. "Previous drilling results in the area indicated very consistent bedrock depths across the area, which should allow water to exit the slope easily, preventing saturation of the soil. However, when we conducted our investigation, we showed there were huge undulations in the bedrock at the bottom of the slope, which were trapping water like a bowl. We believe this water is contributing to the slope stability issue in the area."

Projects that encounter these issues can face substantial extra costs and delays while designers and contractors adapt the original plan or have to attempt another repair. Those problems can be avoided, or at least minimized, by better understanding the subsurface conditions through non-invasive testing.

Wood said subsurface imaging is often used once a problem has already been identified to help designers make decisions about how to fix it. For instance, when cracks appear in a road, imaging can efficiently determine why the ground beneath is shifting and designers can make informed decisions about next steps.

"We can come up with better remediation methods or choose more appropriate methods based on the problem," Wood said. "Without that information, you're going in blind, and you have to make a lot of assumptions.

"We're putting a lot more information into the decision-makers' hands."