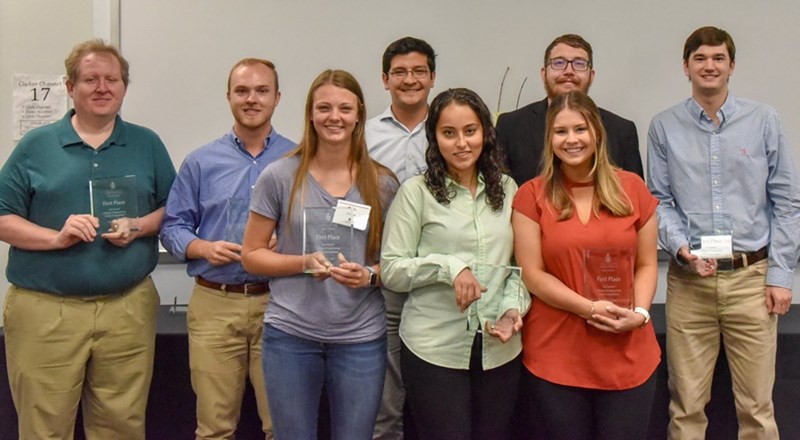 Team Grip Strength Pen won first prize in the 2019 Senior Capstone Design Poster Competition. The team created a pen to monitor a person's grip pressure while wirelessly transmitting the information to a computer or any other device.

Students from six engineering departments gathered in April to show off the culmination of a year's work at the third annual Senior Capstone Design Poster Competition.

Students from biomedical, biological, computer, electrical and mechanical engineering, as well as computer science, presented their year-long projects to faculty, staff, family members and friends, who voted on the top three.

More than 60 posters were presented, showcasing engineering skills developed by students throughout their undergraduate career.

The top three teams were:

First Place: Grip Strength Pen, a pen developed by electrical and biomedical engineers to monitor a person's grip pressure while wirelessly transmitting the information to a computer or any other device. Team members were:

All three groups were recognized at the College of Engineering student awards April 30.

Support from Jeff and Kathy Sanders and Carl and Susan Halford helped make the awards possible.

To learn more about the Integrated Design Experience for Undergraduate Students and how to get involved, contact Robert Saunders at rsaunders@uark.edu.