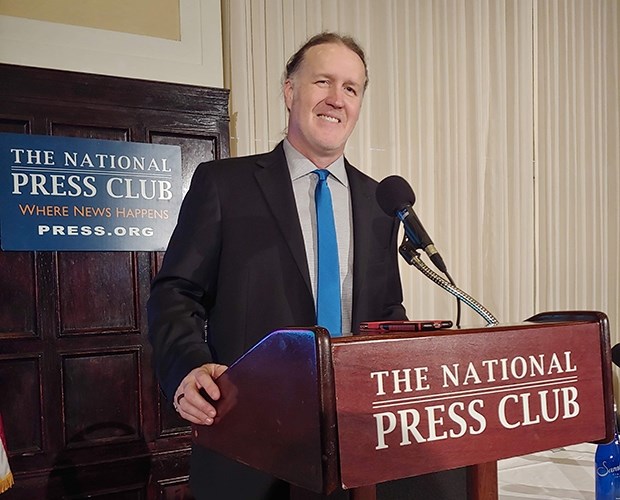 Brent Thomas Williams participated in a presentation at the National Press Club in Washington, D.C.

Directors of the six projects that make up the federal initiative called "Promoting Readiness of Minors in Supplemental Security Income," or PROMISE, gathered April 24 at the National Press Club in Washington, D.C. They presented the design, successes and challenges of PROMISE to an audience of federal and state policymakers. The presentation is available via webcast.

PROMISE is aimed at improving the career and education outcomes of low-income teenagers with disabilities who receive Supplemental Security Income by providing training and paid work experiences for them.

During the event, Brent Thomas Williams, associate professor of counselor education and principal investigator of Arkansas PROMISE, gave an overview of the population that PROMISE served and explained how that influenced the design of the project.

"We were dealing with some of the most marginalized folks within our county," said Williams. "This marginalization, this lack of resources, this lack of opportunities is what facilitates generational poverty. It's what facilitates ongoing reliance upon benefits; it's what generates isolation, what generates lack of community involvement. That was the population we were dealing with."

Williams described the main elements of the project design. "PROMISE worked because we developed relationships," he explained. "…From the start to the finish, it was about a holistic approach that was driven by the youth and the families, and in the end, provided them with an individualized, customized option, that we hope…can really make a long term impact on employment and education outcomes."

Arkansas PROMISE, which was funded with a total award of close to $36 million award from the U.S. Department of Education, lasted six years, from 2013-2019. Mathematica Policy Research, which evaluated the first 18 months of the PROMISE projects, found that Arkansas PROMISE expanded the share of Arkansas youth who receive guidance in the transition from school to work and increased the likelihood that their parents would also receive these kinds of services. Arkansas PROMISE has had a positive impact on the number of youth engaged in job training, and it increased the likelihood that participating youth had a paid job. The program also increased the total annual earnings of these youth by 164 percent, while decreasing participants' reliance on Social Security payments.