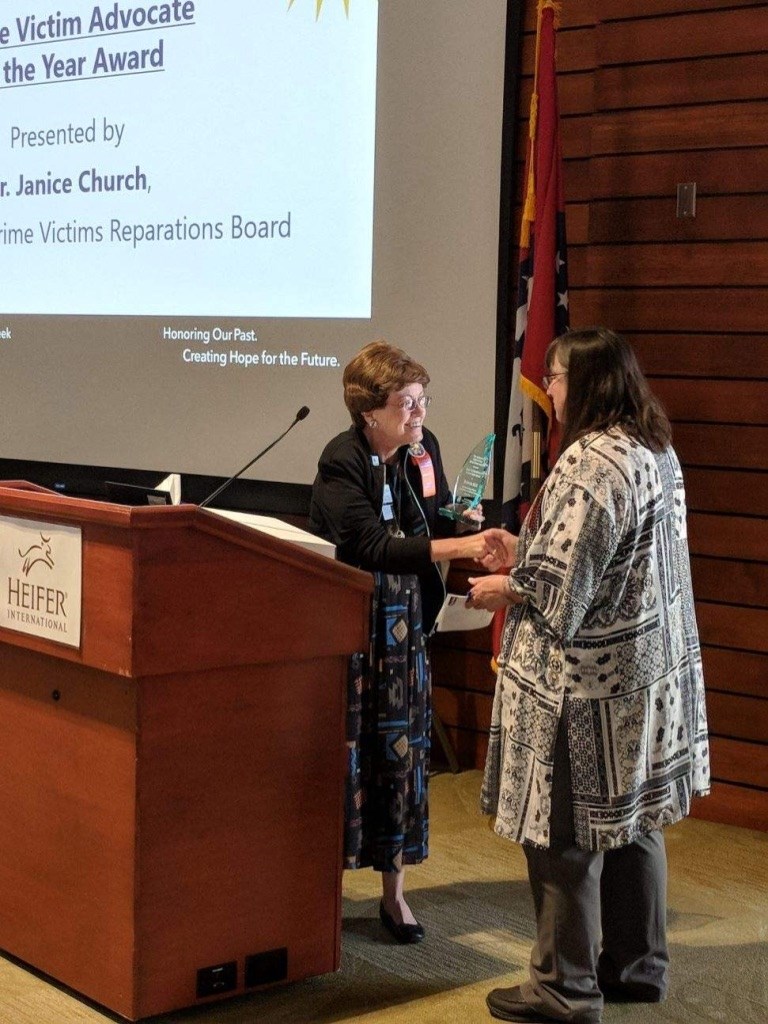 Roberta Sick, director of the Initiatives on Access and Justice at the University of Arkansas - Partners for Inclusive Communities, was one of two recipients of the 2019 Crime Victim Advocate of the Year Award given by the Arkansas Crime Victims Reparations Board, Arkansas Attorney General's Office.

The award was presented to Sick on April 12 in Little Rock at the Arkansas Recognition and Victims' Rights Ceremony held to commemorate National Crime Victims' Rights Week. When accepting the award, she said, "It takes a village, as no one can do this work alone, so thank you."

Sick has a longstanding history in work related to disability access and inclusion. One of the original members of the Arkansas Americans with Disabilities Act Roundtable, Sick provided many hours of training on the ADA and was instrumental in bringing Arkansans together to address systemic issues that impact access.

Janice K. Church, chairman of the Arkansas Crime Victims Reparations Board, said, "Ms. Sick is well known professionally for her work with victims with disabilities, and this is truly an honor well-deserved!"

Since 1998, Sick has directed Partners' violence prevention and intervention efforts. She has been involved in a number of training efforts both in the state and nationally, addressing the critical issues of preventing violence in the lives of people with disabilities and providing access to services. This has included training for professionals, law enforcement and information for people with disabilities.

Sick served as co-chair of the National Council on Independent Living's Violence and Abuse Subcommittee from its inception in 2006 until 2017.

At Partners, she and her team provide direct services to victims with disabilities through co-advocacy with domestic violence, sexual assault, and law enforcement-based victim advocates. She is also the Principal Investigator of the Arkansas Victim Assistance Academy, a collaboration between Partners and the Crime Victims Assistance Association of Arkansas and a multiagency steering committee. She is a licensed professional counselor.