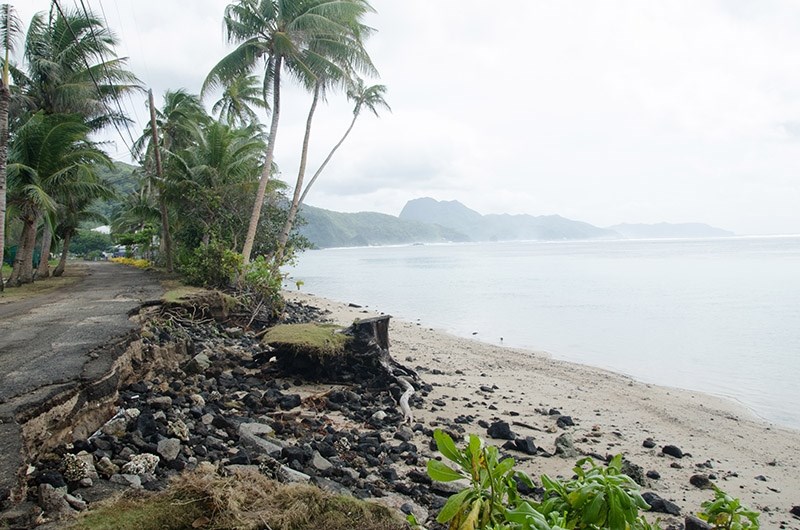 High tides from a storm caused the small road to Coconut Point in Nu'uuli, American Samoa, to erode into the ocean.

FAYETTEVILLE, Ark. – Victoria Herrmann will present a lecture at 4:45 p.m. Monday, April 22, in Ken and Linda Sue Shollmier Hall, Room 250 of Vol Walker Hall, on the University of Arkansas campus, as part of the Fay Jones School of Architecture and Design lecture series.

Herrmann is the president and managing director of The Arctic Institute, a nonprofit organization dedicated to Arctic security research.

In addition, Herrmann will present the same lecture at 6 p.m. April 23 at the Arkansas Arts Center, 501 E. Ninth St., in Little Rock. That lecture is part of the Architecture and Design Network's 2018-2019 June Freeman Lecture Series, of which the Fay Jones School is a sponsor.

In her lecture, "Weathering It Together: Designing for the Anthropocene," Herrmann will discuss details of the Fourth National Climate Assessment, released in late 2018. This report warned that the quality of life for residents across the southeastern United States will be compromised as the built environment becomes ever-more vulnerable to increasing temperatures and flooding brought about by a changing climate, particularly as infrastructure ages and populations shift to urban areas. Herrmann contends that professionals in design, architecture and historic preservation can play important roles in supporting the continued vibrancy and viability of resilient communities amidst rapid environmental change.

Herrmann will help audience members better understand the climate change impacts already occurring in the Southeast and, through examples from across the country, describe the responsibility that the architecture and design community has in building a community-driven vision for a resilient future.

As a National Geographic Explorer, Herrmann was lead researcher for America's Eroding Edges project and traveled across the country in 2016 and 2017, interviewing 350 local leaders to identify what is most needed to safeguard coastal communities against unavoidable climate change impacts.

Herrmann teaches sustainability at American University in Washington, D.C., and science communication at the University Centre of the Westfjords in Ísafjörður, Iceland.

She was previously a Junior Fellow at the Carnegie Endowment for International Peace, a Fulbright Canada Awardee, a Mirzayan Science and Technology Policy Fellow at the National Academies of Sciences, Engineering, and Medicine, and a Gates Scholar at the University of Cambridge in the United Kingdom.

This is the Fay Jones School's Earth Day lecture.