U of A Classical Studies Students Triumph at National Convention 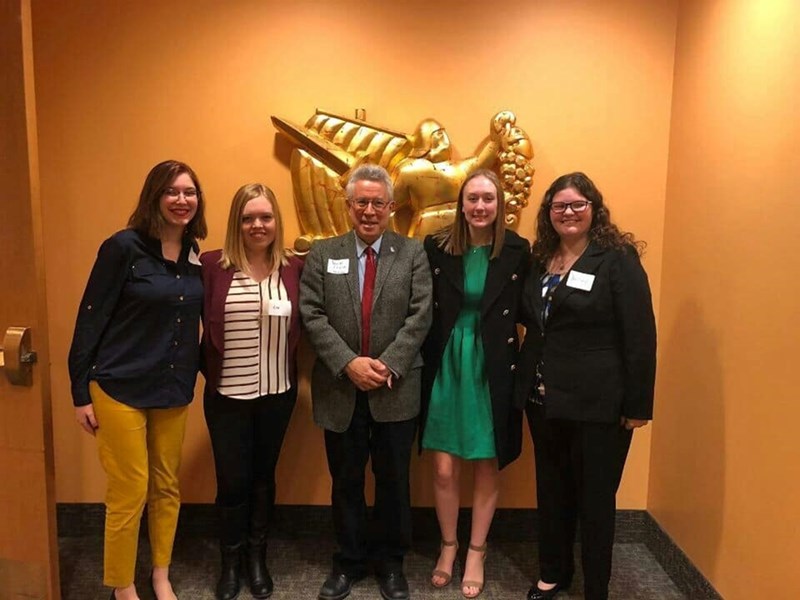 Four students of ancient Greek, Latin and Classical Studies took home top honors from this spring's national annual convention of Eta Sigma Phi, the Classics Honorary Society. They are all students in J. William Fulbright College of Arts and Sciences at the University of Arkansas.

During the conference at St. Olaf College in Northfield, Minnesota, the U of A team won the national Certamen Classics College Quiz Bowl, and one student on the team was elected to be Eta Sigma Phi's national president.

Undergraduates Nina Andersen, Claire Hutchinson, Kaylyn Moore and Kelsey Myers formed a Certamen team which they named RAZORBACCHAE and competed against eight other student teams in the double elimination competition.

They answered questions about the Odyssey, Greek pottery and architecture, Latin and Greek vocabulary and grammar, mythology, Roman topography, and ancient weights and distances. The team received an accolade at the convention banquet, and scholarly books on classical antiquity, courtesy of the National Latin Exam.

On the convention's final day, honors student Nina Andersen, a junior classical studies and anthropology major, won the election to become the Megale Prytanis (national president) of Eta Sigma Phi, an office she assumed immediately, and in which she will serve until next year's national convention at Carthage College in Kenosha, Wisconsin.

U of A classical studies professor Daniel Levine, a trustee of Eta Sigma Phi, and one of the faculty advisors for the local chapter, attended the convention and expressed pride in the U of A students' accomplishments.

"All of the members of our chapter are strong in academics; they are enthusiastic, eager to succeed and full of energy," said Levine, University Professor in the Department of World Languages, Literatures and Cultures. "The four who represented us at the national convention impressed all of the participants with their outstanding knowledge, demeanor and skill. I know that Ms. Andersen will be an active and successful national president. Congratulations, Razorbacchae!"

About Eta Sigma Phi: Eta Sigma Phi is an honorary collegiate society for students of Latin and/or Greek. Members are elected by local chapters which have been chartered by the society. Eta Sigma Phi had its beginning in 1914 when a group of students in the Department of Greek at the University of Chicago organized an undergraduate classical club to which honor students in Greek and Latin were elected to membership. This organization later united with a similar organization at Northwestern University and became Eta Sigma Phi. In 1924 the society became national, and chapters were organized at leading colleges and universities. The society was incorporated in 1927 under the laws of the State of Illinois. The Constitution of Eta Sigma Phi states that the purposes of the society are "to develop and promote interest in classical study among the students of colleges and universities; to promote closer fraternal relationship among students who are interested in classical study, including inter-campus relationship; to engage generally in an effort to stimulate interest in classical study, and in the history, art, and literature of ancient Greece and Rome."

A version of this story also appeared in the Fulbright REVIEW.