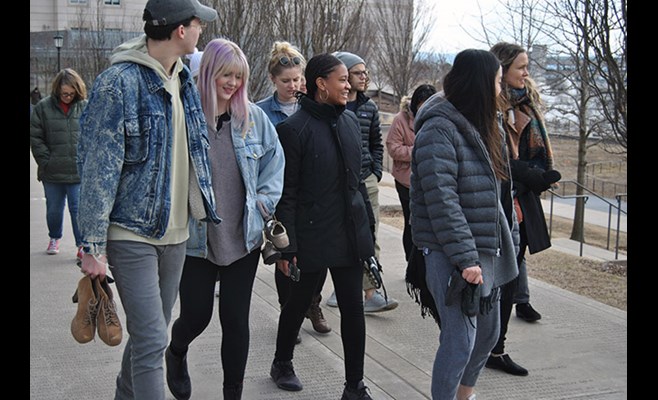 Design students walk across the University of Arkansas campus as they work on their workshop projects. 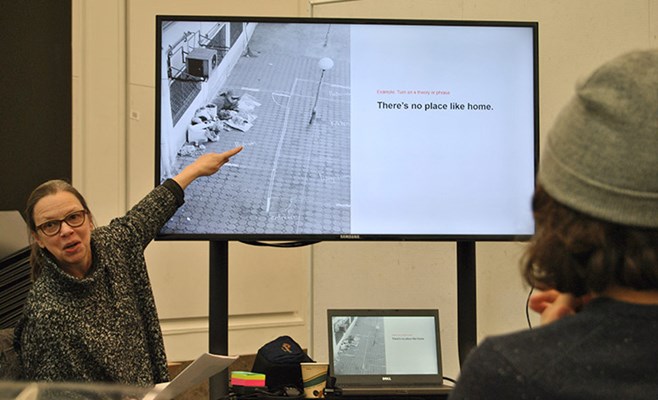 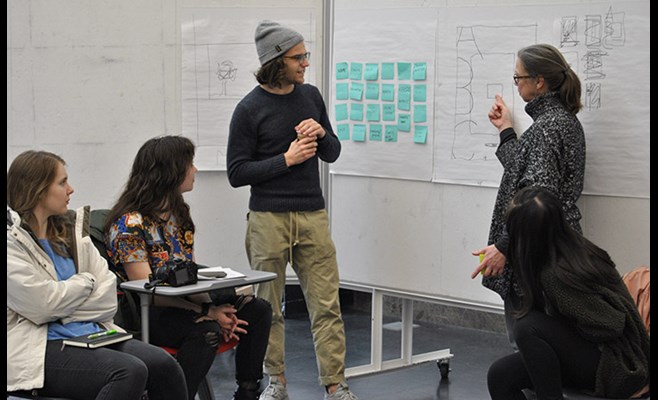 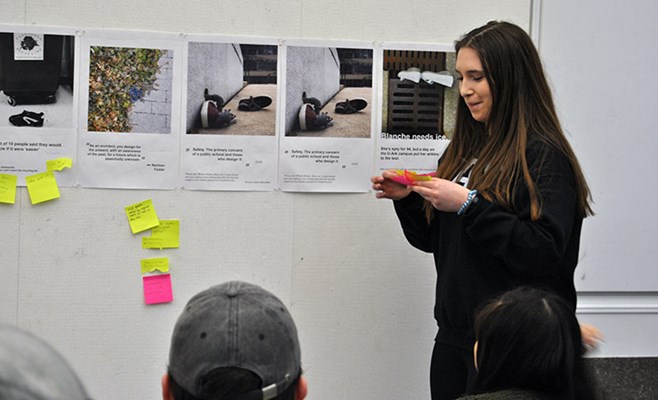 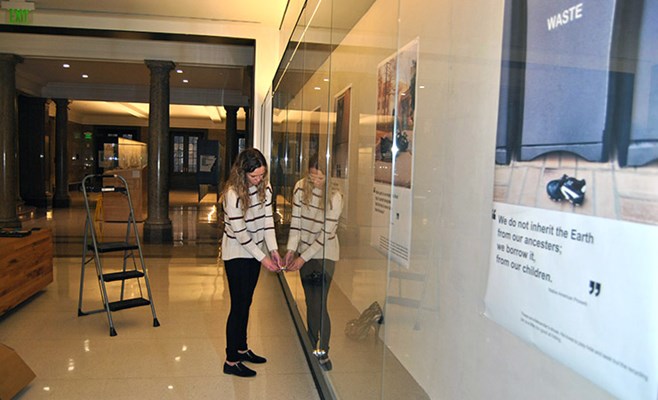 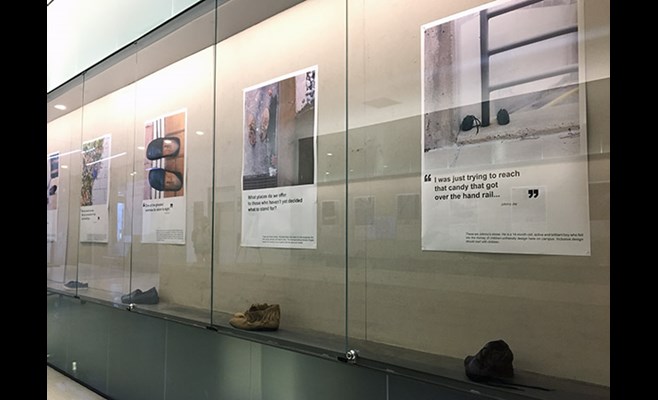 Posters and shoes from the workshop were displayed for several weeks in Vol Walker Hall. 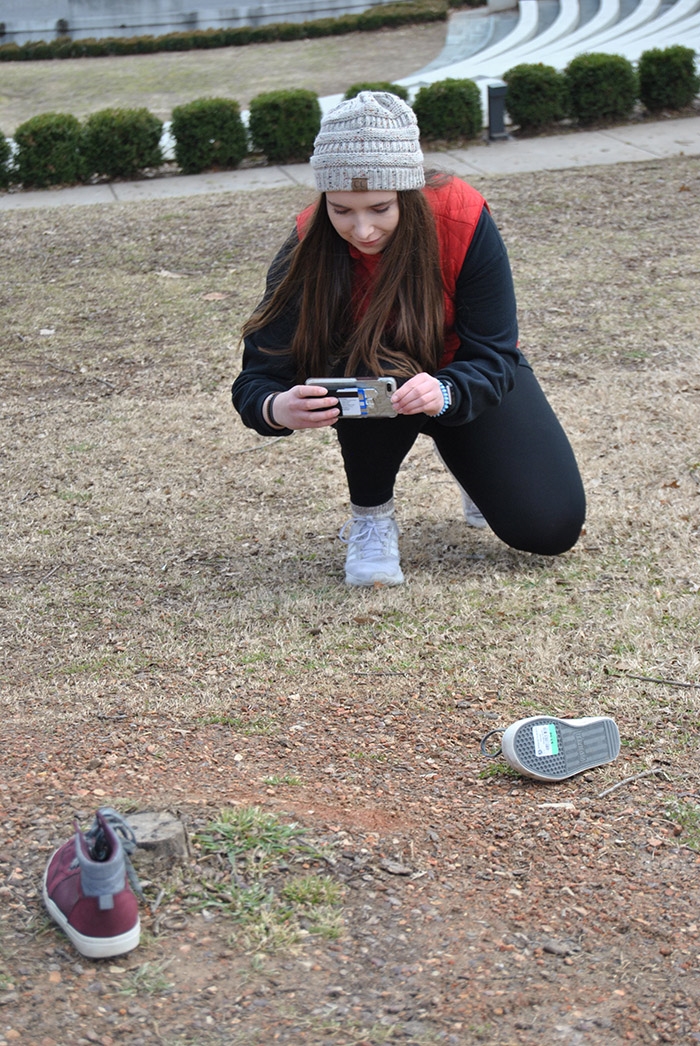 Kyra Vreeland, an architecture student, photographs a pair of shoes as part of the design thinking workshop for honors students, led by Beth Tauke and held in February on the U of A campus.

FAYETTEVILLE, Ark. – University of Arkansas honors students in the Fay Jones School of Architecture and Design spent a recent Sunday grappling with issues of diversity, inclusiveness and design on campus.

The result was a public awareness campaign in the form of advocacy posters that were displayed over several weeks in Vol Walker Hall.

Called "In Our Shoes," the Feb. 17 design thinking workshop was a collaboration between the U of A Honors College and the Fay Jones School. Fourteen honors students from three design disciplines — architecture, landscape architecture and interior design — took part.

Beth Tauke, associate dean in the School of Architecture and Planning at the State University of New York at Buffalo, led the workshop. Tauke is project director in the Center for Inclusive Design and Environmental Access, the leading research center on universal design in the built environment in the United States.

Inclusive design began as a way to address design requirements for physical disabilities, but the concept has expanded to include much more, Tauke explained. Also known as universal design and design for all, inclusive design now addresses a range of disabilities including sensory, cognitive and psychological, as well as needs associated with normal aging.

Also overlooked in the built environment are the needs of children, various gender identities, followers of different religions and low-income people who cannot pay for amenities.

"There are so many things that typically we're not keeping in mind when we're developing designs for the built environment," Tauke said.

To help students imagine the challenges other people face, Tauke brought a box of used shoes — spiky heels, children's shoes, sensible flats and others — from a Goodwill in Buffalo.

Tauke asked students to select a pair of shoes and compile a detailed biography of the hypothetical person who had worn them. She pressed for details such as favorite foods, music they listen to and family makeup, as well as the broader categories of age, gender identity, ethnicity, socioeconomic status, sexual orientation, religion and more.

Such exercises help students develop empathy and begin to realize the complexities of their potential clients, she said. "It's very important for students to understand that the people they think they might be designing for are not always the people for whom they are designing."

Next, students went for a walk, spotting trip hazards and design flaws for their imagined characters. "I want you to think very carefully: What would it be like to take a walk if you were that person?" Tauke asked.

Students made frequent stops on their walk around campus, photographing their unique pairs of shoes against potential trouble spots. The steep slope and extended stairway of the Bell Engineering building was one site flagged by several students, for example.

Back at Vol Walker Hall, students worked in groups of two or three to propose layout ideas for their public service announcement posters. They convened as a whole group to choose a final template, working together to finesse details of alignment, font, color, image size and proportion.

"Every single poster that's up on the wall is sending and reinforcing the same message," said Max Frank, a second-year landscape architecture student who took part in the workshop. "We really wanted this to read as a unified campaign."

The actual shoes students used for inspiration were showcased beneath their respective posters, a student's idea eagerly incorporated by Tauke and the group.

Accessibility issues addressed range from children's inability to reach a restroom sink to trip hazards for the visually impaired. The majority of the posters focus on physical disabilities, which are simpler to convey in a single photograph, Tauke noted. Several posters tackle other issues, such as the fear of walking alone at night or the social uncertainty of a young person exploring their gender identity.

The character Frank developed is an elderly woman named Blanche, still active despite a hip injury from roller-skating with her twin grandsons, he said. Frank's poster draws attention to the potential trip hazard an uneven drainage grate presents. "Blanche needs ice," his copy reads. "She's spry for 94, but a day on campus visiting her grandsons puts her ankles to the test."

The workshop heightened his awareness of accessibility issues and the unconscious mindset behind them, Frank said. "We assume that when something is really difficult for us, it's because we're not capable," he said. "But maybe it's just not designed well - and could be designed better, so that people really could use it intuitively."

The workshop intertwined individual work with group process - a hallmark of design thinking. Design thinking is a strategic approach that emphasizes the power of collective creativity in every step of the design process, from brainstorming ideas to developing prototypes to critiquing those prototypes and refining further. Design thinking also focuses attention on the human being served by the design, incorporating their input and putting their needs center stage.

The workshop was the third annual design thinking event hosted by the Honors College and the Fay Jones School in recent years.

"Professor Tauke's workshop helped students use a creative and unconventional design process to closely evaluate issues in our campus environment," said Noah Billig, assistant professor of landscape architecture and honors program director in the Fay Jones School. "Such critical and iterative approaches are important for any design student, but particularly students interested in pursuing design advocacy."

The "In Our Shoes" project highlighted design as a social act, Tauke said. The way the built environment is shaped reflects conscious and unconscious positions on who is recognized in the world and who isn't, and thus, whose needs matter most, she said.

"Every action that we take, in some ways, has a position attached to it," she said. "We all need to really think about: What are we doing, and what are the social consequences of the design acts we are making?"

This way of thinking resonates with the young people she teaches, Tauke said. "This current generation of designers is very interested in making sure that what they are designing matters in terms of improving our environments and our lives."

Frank said he came away with a heightened understanding of the need for empathy in the design process. The detailed bios students created for their characters helped them think beyond their immediate assumptions, he said.

"Beth talked about that kind of intentional empathy being the biggest driver in having a built environment that is inclusive and accessible for people," he said.