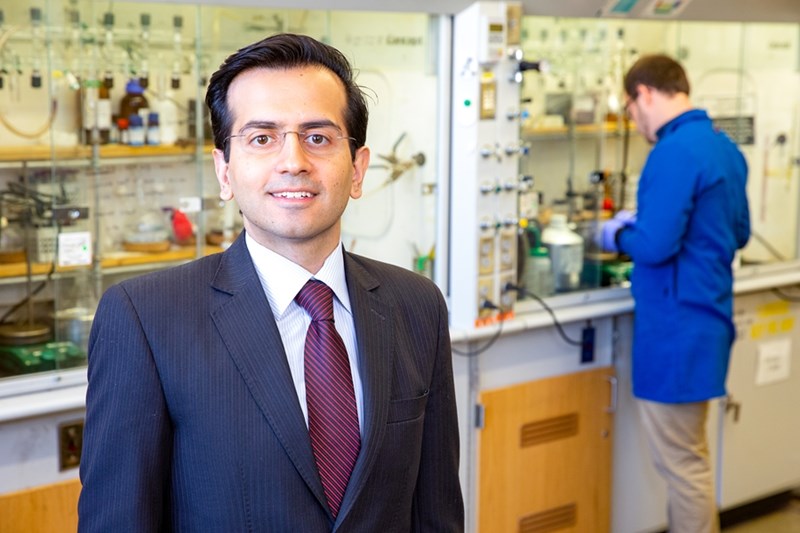 FAYETTEVILLE, Ark. – A chemist at the University of Arkansas has received a grant from the National Institutes of Health to advance development of porous nanoreactors to improve the speed and accuracy of early cancer detection through positron-emission tomography, commonly known as PET imaging.

The $428,285 grant to Hassan Beyzavi, assistant professor of chemistry, supports his work to improve the effectiveness of the noninvasive biomedical imaging method. PET imaging is used in the diagnosis and treatment of cancer and other diseases.

“Cancer is the second most common cause of death in the United States,” Beyzavi said. “However, the mortality rate can be often greatly reduced by early diagnosis and therapy.”

This diagram shows Beyzavi’s design for a nanoreactor containing catalysts that can perform the necessary chemical reactions to prepare tracer molecules for use in PET scanning.

His research is focused on improving the accuracy of PET scans, through development of nanoreactors that bind radioactive isotopes to tumor cells more effectively than current methods.

PET uses fluorine-18, a radioactive isotope, to detect tumor cells. The fluorine-18 must be added to specially designed molecules called tracers that are injected into the body to bind with tumor cell receptors. The PET scans pick up the radiation from the tracers  that have become bound to cancer cells.

However, the molecule currently used as a tracer — fluoro-deoxyglucose — can  travel to other parts of the body beyond the cancer cells. This can make it difficult for oncologists to distinguish between the tracers that have attached to tumor cells and those that show up in cancer-free areas. “The smaller the tumor is, the more difficult it is to identify it using this method,” explained Beyzavi. “Improving this approach could have an impact on early cancer detection.”

New tracer molecules that selectively bind to cancer cells, but not healthy cells, have been developed; however, they currently are slow to bind with fluorine-18, and the isotope must be used quickly because of its short radioactive half-life. Tracers must be synthesized and then transported to the location of the PET scanner with enough radiation left to be effective, so the fluorination process must happen quickly.

Beyzavi’s porous nanoreactor would solve these challenges. It would be comprised of thin films of a nanoporous material. The channels in the material contain catalysts, and as the fluorine-18 and tracer molecules move through the channels, the catalysts could perform the chemical reactions necessary to bind the fluoride-18 to the tracer molecules, significantly faster than the current methods.