U of A Expert Featured in PBS Documentary, 'Reconstruction: America After the Civil War' April 9 and 16 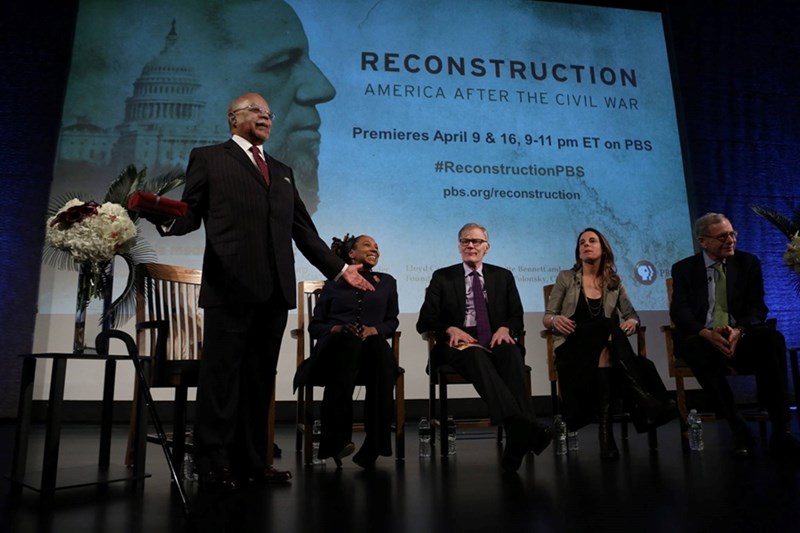 Henry Louis Gates Jr. and panelists at the documentary premiere.

The four-hour documentary series will explore the transformative years following the American Civil War, when the nation struggled to rebuild itself in the face of profound loss, massive destruction and revolutionary social change.

The 12 years that composed the post-war Reconstruction era (1865-77) witnessed a seismic shift in the meaning and makeup of the nation's democracy, with millions of former slaves and free black people seeking out their rightful place as equal citizens under the law.

The first two hours of the series will center on this pivotal decade following the rebellion, charting black progress and highlighting the accomplishments of the many political leaders who emerged to usher their communities into this new era of freedom.

The series' second half will look beyond that hopeful decade, when the arc of history bent backwards, and it became increasingly clear that many former Confederates were never willingly going to accept this new social order and that the federal government was not prepared to provide African Americans with consistent or enduring protection of their new rights.

"I'm honored to be a part of this much-needed series about one of the most important and consequential chapters in American history," Maxwell said. "The Reconstruction period is often among the most overlooked, misunderstood, and misrepresented times in our nation's history. This documentary explores the real story of Reconstruction, and how more than 150 years later the social changes that happened then are still shaping all of our lives today."

Maxwell filmed for the series last summer in New York. She said she does not know in which episodes she will appear, "but seeing this documentary presented by Henry Louis Gates Jr., one of the foremost experts on African American history, is the thing to focus on. It will be well worth it!"

Reconstruction: America After the Civil War is a joint production of Inkwell Films and McGee Media.

For more information, visit the official PBS website for Reconstruction: America After the Civil War