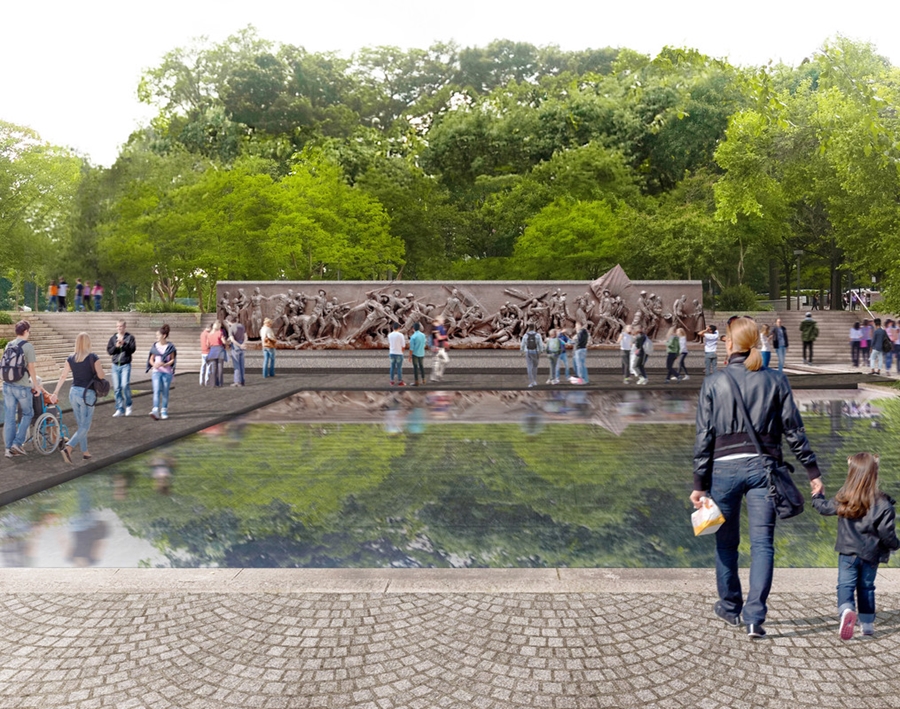 FAYETTEVILLE, Ark. – Joe Weishaar was a 25-year-old architecture intern with a Chicago firm when late-night and weekend design work paid off big. He beat out more than 350 applicants from around the world to design the national World War I Memorial in Washington, D.C. But the dream project has stirred up a fair amount of controversy.

Weishaar, a native of Fayetteville and a 2013 graduate of the Fay Jones School of Architecture and Design and the Honors College, will return to campus to present a free public lecture, “To End All Wars: The Fight for the National WWI Memorial,” at 6 p.m. Wednesday, April 3, in Gearhart Hall Auditorium. A light reception will follow in the Honors Student Lounge, room 130, Gearhart Hall. The lecture is part of the Honors College Invites series, which brings thinkers and doers to campus to share their experiences.

“We’re delighted to welcome Joe back to campus, and eager to see the updated designs for the national World War I Memorial, which will connect visitors with a critical moment in world history,” said Lynda Coon, dean of the Honors College.

All on campus and in the community are invited to attend the lecture. Seating is limited, so participants are asked to complete an online RSVP form and come early to reserve their seats. 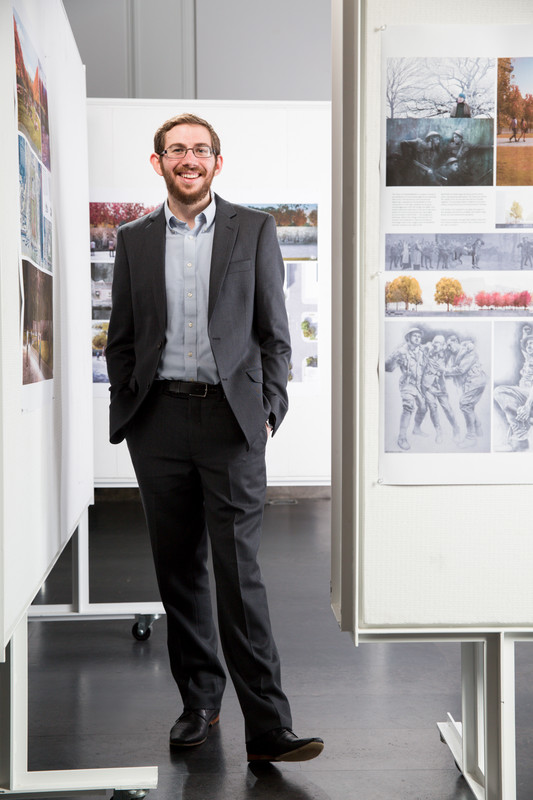 Weishaar’s initial plan for the memorial called for a dramatic change to the proposed site, Pershing Park, located just a block from the White House. The jury praised his proposal, The Weight of Sacrifice, as “elegant and absolute,” and a “deceptively simple concept” that remediated a problematic site. His design centered around replacing the park’s litter-strewn, dried-up sunken pool with a lawn at street level, and inserting an 87-foot-long bronze wall, featuring the work of sculptor Sabin Howard, that would invite passersby to touch.

Two years later, the project has hit a few road bumps, centered chiefly on a reconsideration of Pershing Park, which was designed by M. Paul Friedberg and completed in 1981, as an “exceptional example of a landscape design of the modern period,” according to the National Park Service. The park is now being considered for the National Register of Historic Places, and that changes things, Weishaar said.

“Some of the things we wanted to do early on were met with great resistance,” Weishaar said. “Now, the design calls for roughly 96 percent restoration of the existing park.” His current proposal reduces the bronze relief wall to 57 feet in length and inserts it into the western edge of the existing water feature. An elevated path through the water will allow visitors to interact with the sculpture, which has evolved from bas relief to high relief. “The figures really stand out from the ground and are more dynamic, so there is a bit of a gap; we don’t want someone to walk too close, and get stabbed with a bayonet,” he said jokingly.

Weishaar now lives and works in Washington and describes the past two years as “pretty much non-stop meetings.” The Beltway battle over the World War I Memorial has taught him a lot of things, chiefly “how to run a business, how to be flexible and work with a team, and how to fight for something you believe in.”

PROGRESS ON THE PROJECT

Completion, originally planned for November of last year, has been pushed back to 2021. But Weishaar is quick to emphasize that the World War I Memorial is “moving at full tilt.” The United States World War I Centennial Commission has raised $24 million to date – close to 75 percent of the total estimated cost of $35 million. Weishaar recently flew to Stroud, England, to oversee work at the Pangolin Foundry, which has begun fabricating the sculpture.

Schoolchildren are also benefiting from the project. Thanks to funding from Congress, the Mellon Foundation and Walmart, the commission has partnered with the PBS History channel and the National Endowment of the Humanities to produce a World War I curriculum that has been shared with schools throughout the United States, including McNair and Holt middle schools in Fayetteville.

Weishaar will discuss the latest developments in his lecture, and will also meet with University of Arkansas students when he visits campus in April.

U of A PREPARED HIM FOR NATIONAL PROJECT

It’s a lot to tackle for a designer who’s not yet 30. Weishaar is quick to credit his professional architectural training and honors studies at the University of Arkansas in preparing him for this monumental task. “I couldn’t have done this project without my experience at the U of A, in no way, shape or form,” he said.

Thanks to support from an Honors College Academy Scholarship and an Arkansas Governors Distinguished Scholarship, Weishaar traveled the world while he was an undergraduate. He studied landscape design and urban space in the Fay Jones School’s Mexico Urban Studio, and his second place win in the 2011 Lyceum Fellowship Competition also funded urban studies in the University of Arkansas Rome Center and points across Europe. “This helped me understand what urban space means to people around the world,” he said.

Weishaar’s honors thesis, which focused on architectural forms and urban space in ancient Pompeii, also helped him in developing a design proposal rooted in history and located in one of the most august public spaces in the nation.

About the Honors College: The University of Arkansas Honors College was established in 2002 and unites the university’s top undergraduate students and professors in a learning environment characterized by discovery, creativity and service. Each year the Honors College awards up to 90 freshman fellowships that provide $72,000 over four years, and more than $1 million in undergraduate research and study abroad grants. The Honors College is nationally recognized for the high caliber of students it admits and graduates. Honors students enjoy small, in-depth classes and seminars taught by the university’s most innovative, research-active professors. Honors programs are offered in all disciplines, tailored to students’ academic interests, with interdisciplinary collaborations encouraged. One hundred percent of Honors College graduates have engaged in mentored research.