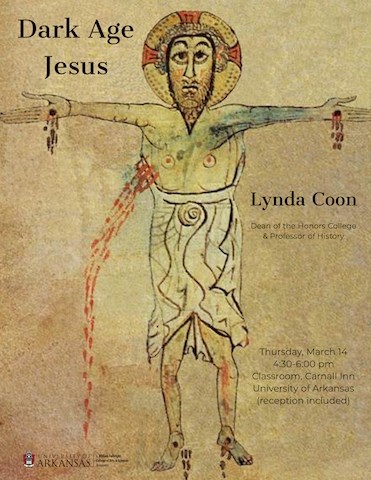 The J. William Fulbright College of Arts and Sciences' Humanities Faculty Colloquium Series presents Lynda Coon, who will discuss her  book project "Dark Age Jesus." The colloquium takes place at 4:30 p.m. on Thursday, March 14, in the Carnall Inn classroom on the University of Arkansas campus.

Dark Age Jesus: The early medieval cult dedicated to the crucified Jesus exists between two formative periods in the history of Christianity:  late antiquity (ca. 200-600) and the later Middle Ages (ca. 1000-1300). On either side of the chronological divide stands some of the best work in the field of gender and religion. On the late ancient end, Jesus's gender fluctuates between heroic athlete and hapless victim of imperial might, between sacred hermaphrodite and Roman sage.

On the later side of the equation, Jesus's flesh goes on to have a history all of its own, metamorphosing into a religious system in which delighting in the savior's materiality — his blood, the openings into his body, and his sweet limbs — appears in the writings of the professional religious and the laity alike, thereby producing a strikingly sensory spirituality. The multivalent Jesus of late antiquity, however, oddly transmutes in the historiographical record into the stable savior of a so-called "Dark Age," an era ostensibly known for narrowing Jesus's role to royal judge, apocalyptic divinity, or superhuman hero of an apostolic warrior band.

Christ, as it were, suppresses the humanity of Jesus, who must then wait for a second "incarnation" in the 11th century. As art historians have stressed, the Dark Age deity appears in illuminated manuscripts intensely disassociated from the flesh: his eyes stare wide open at the viewer and do so without pain even at the moment of his torturous death.

Professor Coon takes Jesus off of his Dark Age cross, which often serves as a distraction from his very human body, and interrogate that body within liturgical, spatial, ritual, visual, exegetical, and sensory contexts. She focuses on Jesus's body in parts — the open eyes, the elongated torso, the extended hands, the punctured flesh.

The pivotal piece of this book will be the gender of Jesus within the complex and shifting religious worlds of the early medieval West, where the god of the Christians could materialize simultaneously as a cosmic tree, a thorny hill, a labyrinth drawn with a monastic compass, and a tortured nobleman. Every bit as fluid as the gendered Jesus of the later Roman Empire and yet happily not as restricted in nature as the suffering savior of the Gothic era, Dark Age Jesus plays an elusive game of hide-and-seek with his spectators, fusing in his person both the human and the divine, the flesh and the spirit, the masculine and the feminine, and the Christian and the barbaric. Dark Age Jesus complicates longstanding teleological narratives about Jesus's march through history. No longer can the early medieval era be understood simply as a temporary set-back to a larger, more important story in which intimacy with the human savior is the dispensation of a subsequent era.

Lynda Coon is professor of history and dean of the Honors College. She is the author of several publications including Gendering Dark Age Jesus," Gender & History (April 2016), Dark Age Bodies: Gender and Monastic Practice in the Early Medieval West (University of Pennsylvania Press), and Sacred Fictions: Holy Women and Hagiography in Late Antiquity (University of Pennsylvania Press).

The faculty colloquium series highlights compelling humanistic research and invites lively intellectual exchange. The event is free and open to the public. Light hors d'oeuvres will be served.