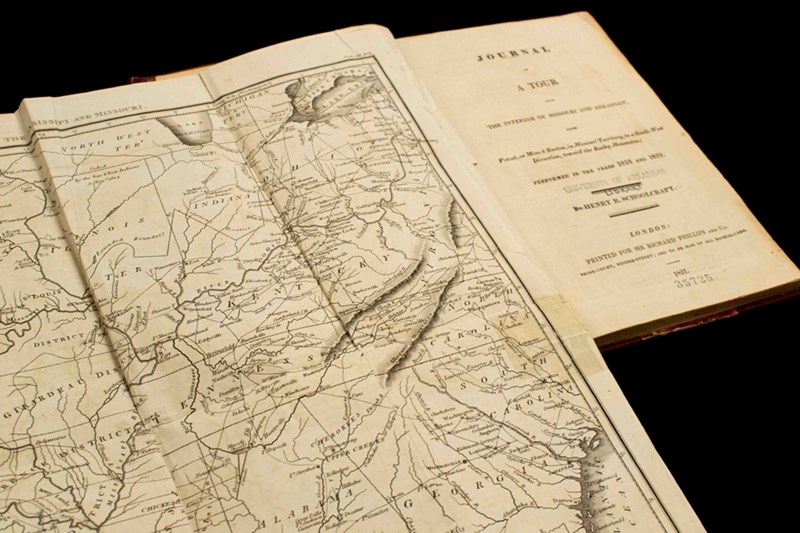 From Special Collections: Journal of a tour into the interior of Missouri and Arkansaw by Henry Rowe Schoolcraft, 1821.

A new exhibit is on display in the Special Collections department of Mullins Library. "Arkansa, Arkansaw, Arkansas: 200 Years Since the Founding of the Territory" will be on display through the summer semesters.

"March 2, 2019 marks an important anniversary for Arkansas, 200 years since it became a self-standing part of the United States," said Joshua Youngblood, rare books librarian and exhibit curator. "From French traders and early American settlers, to the Native Americans already here and migrating through and African Americans first arriving as slaves—the people and culture of Arkansas began to take shape during the territorial period. There are books, documents, and maps in Special Collections that the University Libraries has been collecting since almost the beginning of the university's history that detail how the territory evolved in the 17 years before statehood."

Noteworthy items in the display include the first issue of the Arkansas Gazette, which began publication at the Arkansas Post, from Nov. 20, 1819. Two of the first detailed descriptions of the territory's lands and people are also included — A Journal of Travels into the Arkansa Territory, During the Year 1819: With Occasional Observations on the Manners of the Aborigines by Thomas Nuttall and A View of the Lead Mines of Missouri: Including Some Observations on the Mineralogy, Geology, Geography, Antiquities, Soil, Climate, Population, and Productions of Missouri and Arkansaw, and Other Sections of the Western Country by Henry Rowe Schoolcraft.

Also included in the exhibit are the Libraries' earliest documentation of a slave auction from 1824, correspondence from John C. Calhoun discussing the possibilities of "the Arkansaw" for future Native American resettlement, and several maps of the territory from the Historical Maps collection.

The Special Collections department curates exhibitions throughout the year to highlight holdings relevant to researchers and current events. The public is welcome to view these exhibits at no charge on the first floor of Mullins Library any time the department is open.