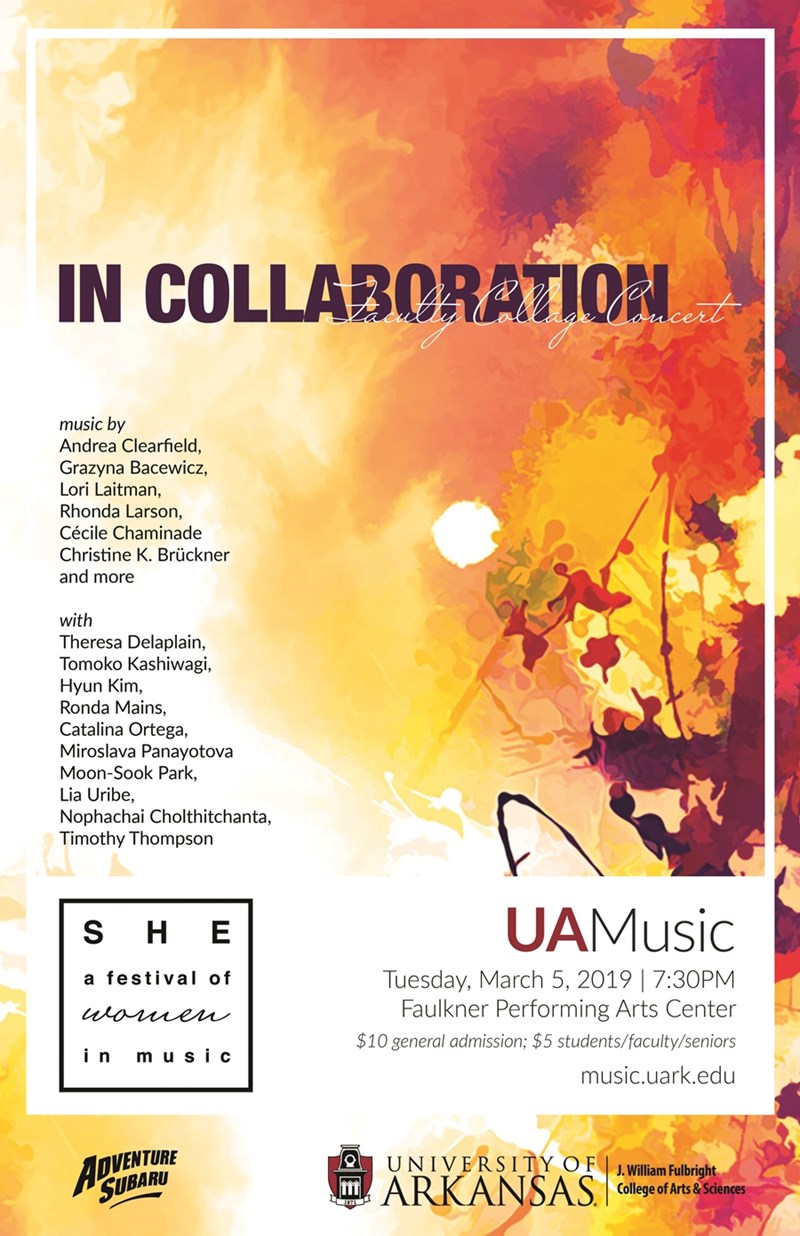 The inaugural SHE: Festival of Women in Music kicks at 7:30 p.m. Tuesday, March 5, with a faculty collage concert, "In Collaboration," at the Jim and Joyce Faulkner Performing Arts Center.

The concert will feature several faculty musicians in a performance of chamber music and solo repertory. With the festival celebrating women in music, the concert will highlight the creative output of female composer including works by Andrea Clearfield, Rhonda Larson, Lori Laitman, and Grazyna Bacewicz, Cécile Chaminade, Christine K. Brückner, Margaret Garwood and Noelia Escalzo, among others.

Tickets are on sale now at faulkner.uark.edu. $10 general admission; $5 students/faculty/seniors

In conjunction with Women's History Month, the Department of Music in the J. William Fulbright College of Arts and Sciences will host an inaugural, month-long festival from March 5-30 highlighting the major role that women have played in the art of music.

SHE, A Festival of Women in Music will recognize women across the field with an array of music featuring women composers and performers.

"Music often breaks down the barriers that separate us," said Ronda Mains, the Department of Music's chair.

Mains said that in a time when society often strains to listen, "SHE makes room for audiences to hear new sounds, to feature composers of fame and lesser-known stature, and to amplify exceptional stories—all drawing attention to compositions by women, works inspired by women, and music for women."

Mains said that SHE also crosses borders, intends to evoke an emotional response, and will prompt historical and cultural memories for all who attend.

With guest lectures, performances of Western art music and contemporary music, and a one-woman play, the festival is filled with events that will spur thought and excite audiences.

SHE is sponsored by Adventure Subaru of Fayetteville and presented in partnership with the J. William Fulbright College of Arts and Sciences Humanities Program, the Jim and Joyce Faulkner Performing Arts Center, and the Osher Lifelong Learning Institute at the University of Arkansas.

More information about this event can be found on the Department of Music's website.