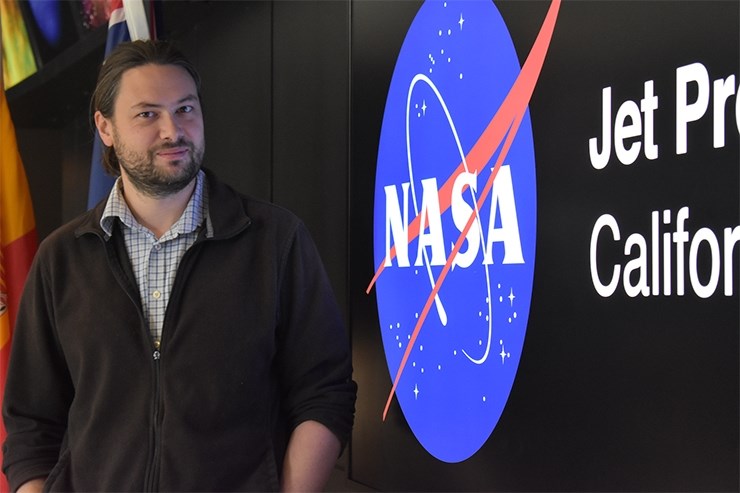 A University of Arkansas electrical engineering alumnus became part of NASA's history last year after working on a mission proving that a small spacecraft could travel into deep space and effectively transmit data back to Earth.

Emmanuel Decrossas is an engineer who specializes in radio frequency and microwave antennae for NASA. He holds a doctorate in electrical engineering from the University of Arkansas and works at NASA's Jet Propulsion Laboratory near Pasadena, California.

Decrossas and his teammates worked on MarCo CubeSat, which went to Mars alongside the 2018 InSight lander, to test the small spacecraft's capabilities of relaying InSight's data back to Earth in real time during the critical entry, descent and landing phase.

The team had eight months to design and deliver the antennae.

They considered this a "high-risk, high-reward" assignment because they were developing new technology, which could take engineers years to create.

However, the technology has proven so successful that it could be used for other missions.

France, Fayetteville and Far Beyond

Decrossas moved to the United States in 2006 from Paris, France, after he received his undergraduate and master's degrees from Université Pierre-et-Marie-Curie. He said one of his advisers told him about an internship opportunity with professor Samir M. El-Ghazaly at the University of Tennessee. Decrossas applied and was accepted, becoming a visiting student scholar.

In 2007, Decrossas' mentor, El-Ghazaly, moved to Arkansas to become the head of the Electrical Engineering Department. Before leaving, El-Ghazaly encouraged Decrossas to continue his studies as a doctoral student, so Decrossas followed him to Fayetteville.

Decrossas said the freedom he had to pursue his research, in combination with the University of Arkansas' unique facilities, helped jump-start his career.

"A lot of professors have a tendency to direct you on how to do the work, but Dr. El-Ghazaly is a little bit different," Decrossas said. "He wants you to figure out the solution on your own."

That independence, El-Ghazaly said, is important for a student's success.

"When working with students, I like to let them think about the problem, identify the challenge, find a solution and then proceed to implement it," El-Ghazaly said. "At the same time, I try to guide them through it, but at first I let them figure it out."

El-Ghazaly said he believes Decrossas' accomplishments come from his motivation to dig deeper into his research and his ability to stay calm in a high-pressure environment.

"We are very proud to have our former graduate student work on such an important project," he said.

"While I was in school, something that actually helped me in my career was HiDEC (High-Density Electronics Center)," Decrossas said.

HiDEC is a research center in the Arkansas Research and Technology Park that gives graduate students the opportunity to pursue a degree with an emphasis in electronic packaging and multichip technology.

Decrossas took two classes at HiDEC, which he said exposed him to hands-on projects while gaining skills in designing and building cost-effective antennas.

"If I design a great antenna with great performances but cannot build it, it's useless," Decrossas said.

After graduating from the U of A in 2012, Decrossas applied for and received a prestigious postdoctoral fellowship from NASA, which is annually given to only 60 worldwide candidates, Decrossas said.

Decrossas' first flight project was designing antennas for a radio occultation instrument, Sentinel-6. That European mission is set to launch in 2020 and will help scientists study the layers of Earth's atmosphere and support numerical weather prediction.

He attributes his accomplishments to the experiences he had during his academic career, mentors who encouraged him and his tenacity to pursue the impossible.

"When people say 'that's impossible' or 'you cannot do it,' — that pushes me to prove them wrong," Decrossas said.

Scientists hope to study the icy surface in search of clues about whether Europa's subsurface could contain an ocean with the right conditions for life.

Decrossas said he will work on predicting the performance of the 'Radar for Europa Assessment and Sounding: Ocean to Near-surface (REASON)' Instrument antennas, which is expected to help map the ice coverage.

He is expected to finish the antennas analysis by 2020 prior to the expected 2023 launch date of NASA's 'Europa Clipper.'