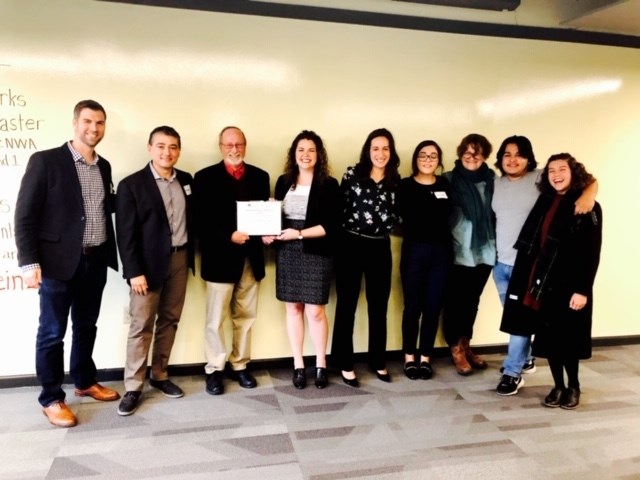 Students enrolled in Social Justice in the Arts were awarded first place in the interdisciplinary Social Innovation Challenge after presenting their collaborative community-building work with the Teen Action Support Center and The Station in Springdale.

FAYETTEVILLE, Ark. — Three students from the University of Arkansas School of Art — Kaylie Mitchell, Larissa Navarrete, and Elizabeth Alspach — were awarded first place by an interdisciplinary panel of judges in the third annual Social Innovation Challenge, held at the Brewer Family Entrepreneurship Hub on Dec. 1, 2018.

Their project, developed as part of their work in the course Social Justice in the Arts taught by Visiting Assistant Professor of Arts Entrepreneurship Adrienne Callander, brought staff from the Teen Action Support Center in Springdale together with residents of the surrounding community for a series of co-created community events and arts workshops. Their project was recognized by the judges for the strength of the collaboration at its core and for the scalability of their idea — the students' hope being that they can develop a model will be applied in other community-building centers around the country.

Sponsored for 2019 by the Kraft Heinz Company, the Challenge culminated a semester-long effort to bring together 330 students and 12 faculty from across the University of Arkansas with 29 community partners. Led by Rogelio Garcia-Contreras, director of social innovation in the Office of Entrepreneurship and Innovation, the Challenge is the capstone event of the Social Innovation Initiative. The initiative offers University of Arkansas students, faculty and staff the opportunity to develop entrepreneurial skills and learn about pressing social and environmental problems defined by partner organizations (many of them local). Judges evaluated the teams based on the sustainability and financial viability of their proposals, as well as their proposed impact assessment mechanisms.

During the fall 2018 semester, students formed interdisciplinary teams to tackle 25 of the 30 problems defined by partner organizations, using entrepreneurial principles and business disciplines. They were encouraged to attend design thinking and lean startup workshops at the Brewer Family Entrepreneurship Hub and McMillon Innovation Studio to develop the skills to define problems, empathize with end users, and communicate their ideas.

"Some students addressed challenges posted by our field partners, while others explored the development of a social venture of their own," noted Garcia-Contreras. "In all cases, a wonderful networking opportunity arose from this interactive service learning experience, not to mention the valuable process through which our students learned and adopted basic entrepreneurial skills, regardless of their interest and area of expertise. The intention is to promote collaboration and set the foundation for a social enterprise movement in our region."

The winning team developed what a "transferrable and scalable model for building connection and community engagement in neighborhoods," explained MFA student Kaylie Mitchell. They prototyped and tested their idea in a neighborhood in Springdale, where members of The Station joined the team and other students from the Social Justice in the Arts class taught by Callander. The students and Station staff began hosting small community events out of a one-bedroom house in the neighborhood. This Allen Street home, which became known as the Allen House, became a destination for creative pursuits on Saturday afternoons.

"Kids from all over the block would show up to paint, work with clay, draw, play sports, coordinate dances," said Mitchell, events that ultimately culminated in a large block party, Build the Block, hosted by the Teen Action Support Center. "Through our work in the neighborhood, we developed an innovative model for building community connectedness and engagement that works with the people in the community, not for them."

The students were introduced to The Station by Callander, whose entire class of undergraduate and graduate students became intrinsically linked to the project. "Almost immediately, we left campus and went to the Station, and within two weeks, [Station director] Aron Shelton secured use of empty house adjacent to the lot where the block party was about to happen. Thus, the Allen House was born." One member of the Station's staff enrolled in the UA to formally take the course.

There were two recurring themes in the team's work, said Callander. "One is, how do we move forward with an equal measure of ambition and humility? This was a guiding principle the class developed. The other was, are we as willing to be affected as we are hoping to affect? It's a vulnerable starting point, but it's the best position from which to learn the most."

"I am making a case for the symbiotic and rich relationship between art and business. So the work we are doing with TASC and The Station and the neighborhood in Springdale, the success of Build the Block, it all speaks to the health of that relationship. To have it confirmed by the win at the Social Innovation Challenge was a revolutionary moment for my research. I think it shows that there are a multitude of possibilities at the intersection of art, business, and social innovation," added Mitchell.

Mitchell views the relationship between business, art, and social innovation as symbiotic and increasingly important, and says the Social Innovation Initiative is relevant for students of any discipline. "The business world is becoming a place of innovation, urban development, research, and entrepreneurship. And with all of these changes brings the need for innovative thinkers, unique perspectives, and expansive skillsets. Never count yourself out because you're not a traditional business student. The differences you bring to the table are your biggest advantages in business today," she said.

About the Office of Entrepreneurship and Innovation: The mission of the University of Arkansas' Office of Entrepreneurship and Innovation is to catalyze entrepreneurial activities and innovation across the university and throughout the state in order to build Arkansas' knowledge-based economy and support healthy, sustainable communities. Since 2009, University of Arkansas students have won more national business plan competitions — 27 in all — than any other institution.