Peculiar Physics at Work in the Brain 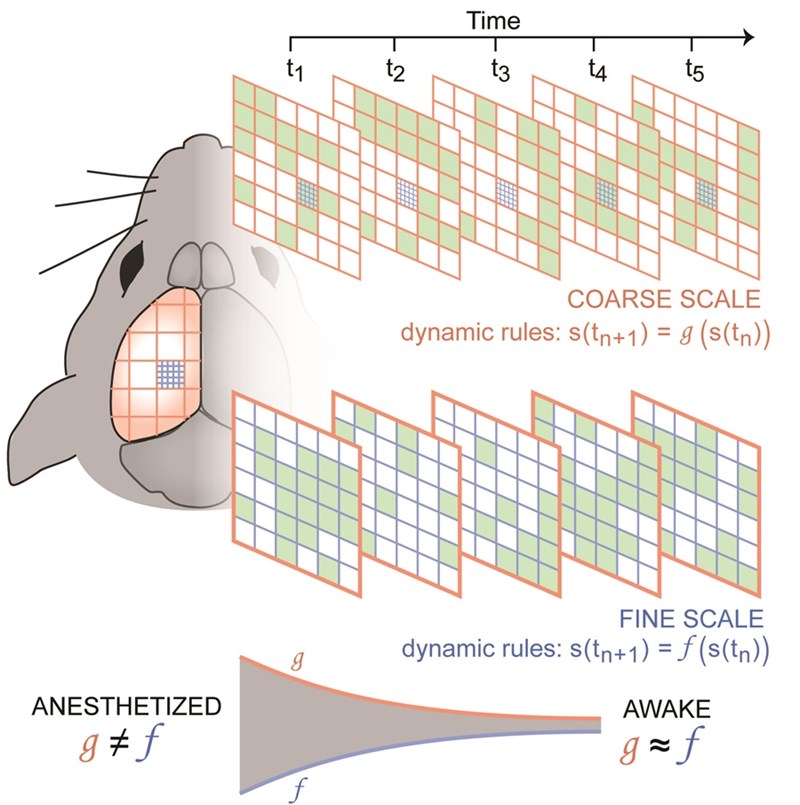 Comparing the brain activity of a mouse at coarse scale (top) or fine scale (bottom), Vidit Agrawal and colleagues found that the same rules govern the activity.

In 1982, the Nobel Prize in physics was awarded to Ken Wilson for his contribution to understanding what goes on in certain materials as they undergo a phase transition — like the transition between liquid water and steam. For certain kinds of phase transitions, it turns out that the governing laws of physics conform to a very peculiar, fractal symmetry. That is, the physical laws are the same whether considered at small scales or large scales. The consequences of this odd scale-change symmetry are profound. It turns out that quite diverse systems — not just water — exhibit the same, universal behavior as long as they conformed to the same scale-change symmetry.

What does this fundamental physics have to do with the brain? Fast forward a couple of decades, and researchers found that brain activity in the cerebral cortex exhibits some of the same features as the physical systems studied by Wilson. The cerebral cortex can also undergo a phase transition. This is not to say that the brain can evaporate or freeze. Rather, the activity of the brain can undergo a transition from on orderly sort to a more disorderly sort. This transition seems to share many similarities with those studied extensively in physical systems, but until very recently the most fundamental question had not been addressed. The scale-change symmetry studied by Wilson and others had not been studied in the context of brain dynamics.

Researchers in the Department of Physics at University of Arkansas collaborating with neurobiologists from Imperial College London have now done this. Vidit Agrawal, a graduate student at the U of A, and colleagues have directly shown that the dynamical rules governing the activity of cerebral cortex can, under certain circumstances, conform to scale-change symmetry. They analyzed experimental measurements from mouse cortex and computational models of neural networks. The computational models confirmed that scale-change symmetry only occurs near a type of neural phase transition. The experimental data revealed that as a mouse awakes from anesthesia, it's brain dynamics approach scale-change symmetry. The work suggests that, in the awake state, the cerebral cortex is governed by laws which are the same at different scales.