U of A Musicians Featured on New EP by Lesly Reynaga 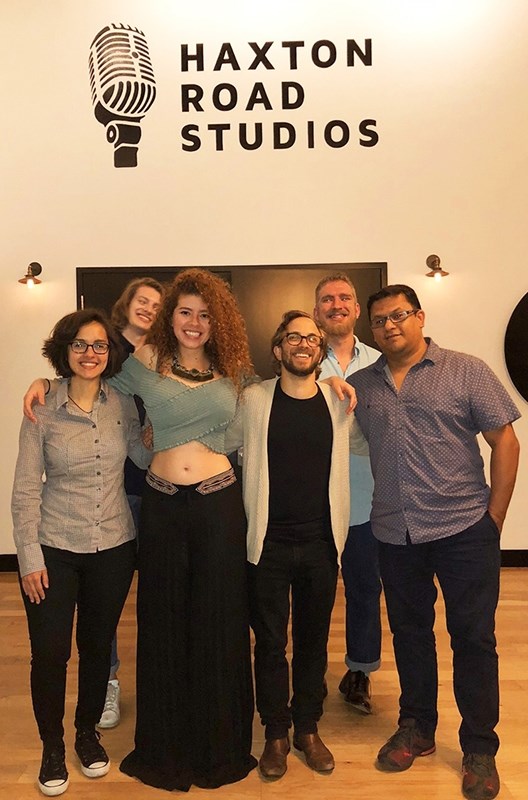 The project began through a collaboration with the House of Songs, a non-profit organization based in Austin, Texas, and Bentonville that invites musicians from all around the world to build relationships with each other and to create music together. "If you can even go an hour away, it changes how you feel about yourself and your music," Troy Campbell, creator and curator for the House of Songs Ozarks, said. "That's how you discover your voice."

Lesly Reynaga began working on her EP after the House of Songs sponsored her visit to Northwest Arkansas, where she met and collaborated with several University of Arkansas musicians who served as band members for Dual Passport. The idea to use U of A students as band members for Reynaga's EP was originally communicated between Campbell and Hertzog, who had previously met at a concert held by Egyptian artist Ramy Essam at the Faulkner Performing Arts Center. Since then, Campbell and Hertzog have been working to collaborate more between the House of Songs and U of A artists.

"As an educator, to facilitate situations in which students can act as professionals, but also learn at the same time, is really one of the goals for our programs," Hertzog said.

This mission was met when Reynaga used U of A artists as her band for a concert held at the House of Songs, but it was taken a step further when she decided to come back to Northwest Arkansas after writing her new EP to record it at Haxton Road Studios with the same musicians. The U of A musicians on the album include students Asher Perkins (bass), Florencia Zuloaga (keyboard), and Jakob Skinner (electronic production), with faculty members Jake Hertzog (guitar) and Fernando Valencia (drums and percussion).

In addition to Reynaga, other visiting House of Songs artists and UA faculty and students also utilize Haxton Road Studios in Bentonville to professionally record their music. For the recording of Reynaga's EP, Hertzog said Haxton Road Studios provided the "quintessential experience for students to play with guest artists on and off campus." The EP was co-produced by Hertzog, who helped construct Reynaga's vision for the album by finding and combining the strengths of the band and everyone in the studio.

Campbell said the House of Songs hopes to collaborate more with UA musicians in the future and Hertzog hopes to continue to provide "career development-type experiences" for students.

About Lesly Reynaga: Lesly Reynaga has made a striking first impression on Texas' musical landscape, earning the reputation of an artist with "the potential to be an Austin breakout star," according to the Austin American-Statesman.

With her new six-song EP, Dual Passport, the 26-year-old Latin pop, singer-songwriter caps off a year which has seen her celebrated by iconic musicians, industry leaders and a growing fan base that includes Austin Mayor Steve Adler, who recently introduced her to the stage with the acclamation, "one of our top new artists in this city. A favorite of mine, I've become a groupie here in the last couple of years."

Dual Passport, co-produced by Reynaga, was recorded with renowned Texas musicians and producers David Grissom, Michael Ramos, Graham Reynolds and A.J. Vallejo. A highlight of the EP were two recordings with the involvement of Al Bell, her mentor and an industry legend, formerly chairman and owner of Stax Records and president of Motown Records.

Born and raised in Monterrey, Mexico, Reynaga pays homage to her two nationalities on "Dual Passport." The release highlights stories about her childhood and upbringing in Mexico; immigration issues; and her pride calling America home, having recently become a U.S. citizen.

About the House of Songs: The House of Songs was inspired by a collaboration between award-winning singer-songwriter Troy Campbell and Danish star Poul Krebs, which led to another collaboration at a writers' retreat on the wind-powered Danish island of Samsø, also known as Song Island. In 2009, they started a one-year project to bring Danish artists to Austin. Recognizing music provides a conduit for connecting diverse cultures together, Campbell developed a plan to spread the concept to other parts of the world. The House of Songs has since sponsored collaborations in 13 countries and now operates out of Austin and Bentonville, where the second permanent location, the House of Songs Ozarks, opened in September 2017.

The House of Songs participants have had internationally charting songs, earned Grammy nominations and festival headlining slots, and built lifelong bonds with musicians and fans. Envisioning international collaboration as the driving force for the future, the House of Songs uses music to open dialogues and build understanding — and ideally, global harmony.