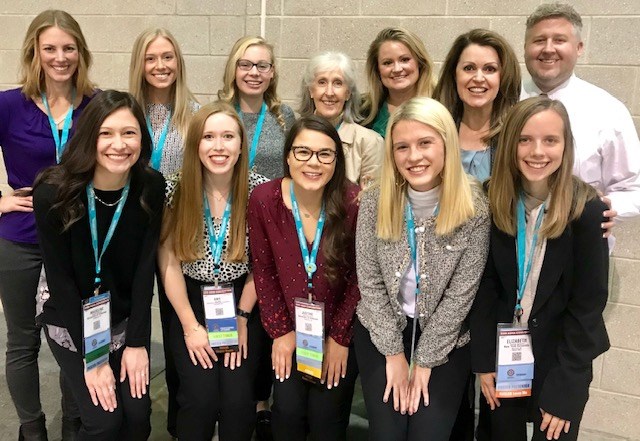 Some of the students and faculty who presented research and posters at the American Speech Language Hearing Association Convention in Boston.

More than 18,000 attendees gathered in Boston this past week to learn and discuss current research and recommended best practices. Faculty and students from the Communication Disorders Program at the University of Arkansas were well represented at this conference. Several students' presentations were designated ASHA (Promoting the next Generation of Researchers) PROGENY presenters. A list of presentations and designations are provided below.

"When feeding doesn't work: The impact of failure to thrive on maternal self-attribution"
Authors: Justine Montgomery and Fran Hagstrom*

Michael Hevel, chair of the Department of Rehabilitation, Human Resources and Communication Disorders, made the trip to Boston to support students and faculty. Additionally nine undergraduate honors students presented their research projects. Presentations were well received and students and faculty are already hard at work preparing for next year's conference to be in Orlando, Florida.