U of A Team Lapovations Wins 2018 SEC Student Pitch Championship 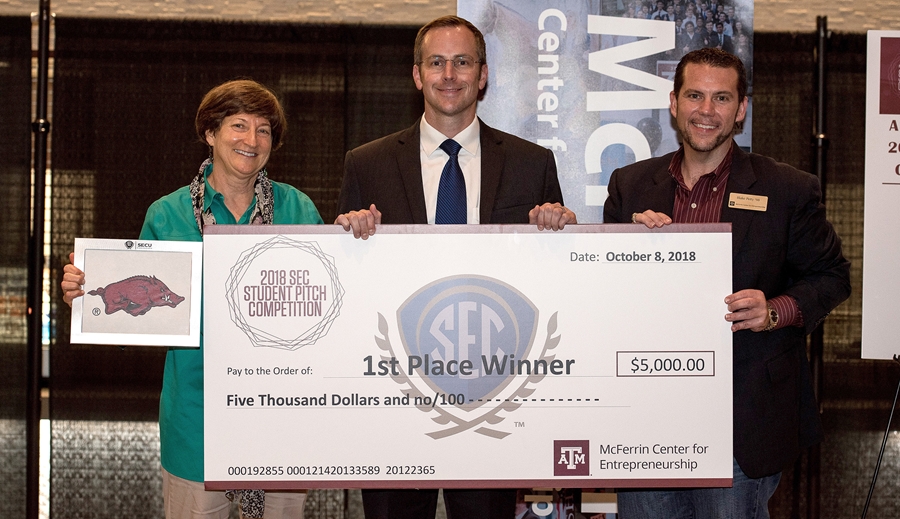 Jared Greer, center, receives the winner's check at the 2018 SEC Student Pitch Championship, with Carol Reeves, left, of the University of Arkansas and Blake Petty, right, of Texas A&M University.

Lapovations, a University of Arkansas business plan competition team, won the 2018 SEC Student Pitch Championship — the second year in a row for an Arkansas team to take the title and its $5,000 cash prize.

This victory cemented Lapovations' status as the most successful startup competition team in U of A history. Competing in several top state, regional and national competitions, Lapovations has won seven competitions and more than $305,000 in cash and investment prizes.

Lapovations is developing a platform of innovative products that improve minimally invasive surgery.

The 2018 SEC Student Pitch Competition was hosted in October at Texas A&M University by the McFerrin Center for Entrepreneurship.

The startup — consisting of Jared Greer, co-founder and chief executive officer; Dr. Chris Taylor, co-founder and chief medical officer, and Nhiem Cao, director of operations — is developing a platform of products that improve minimally invasive surgery. It has office and research space in the U of A's Engineering Research Center in south Fayetteville and hopes to launch its first product in the United States in 2019.

Lapovations was formed in the graduate-level New Venture Development course taught by Carol Reeves, associate vice chancellor for entrepreneurship at the University of Arkansas. Her teams have won more national business competitions since 2009 than those from any other university in America.

"Competing, for those who have a viable business idea or commercial technology, is more like an accelerator program," Greer said. "We received in-depth mentoring, access to capital and seed funding, and around-the-clock coaching during competition season."

"It was a lot of work but also the best possible preparation for starting and growing a new business," he said.

Other competitions won by Lapovations include:

Lapovations has also participated in two competitive accelerator programs, the Delta I-Fund and Health InnovatAR, that have provided an additional $100,000 in investments.