Razorback Transit Jobs Are a Good Option for Some 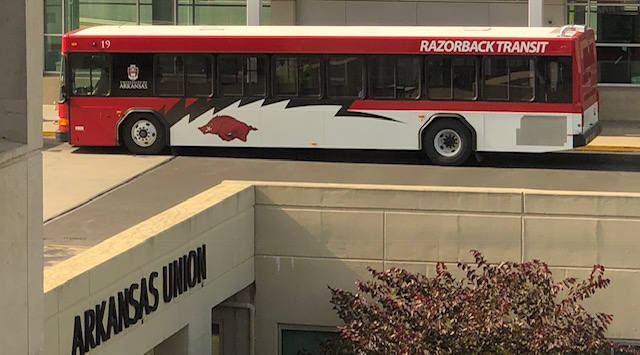 Making a stop at Union Station.

Razorback Transit is always on the lookout for new drivers, and not everyone realizes it, but it is a job that works well for some students at the University of Arkansas.

Anyone who is 18 or older can be considered, and once hired, he or she begins extensive training.

The starting pay is $12 per hour, even during training, with an opportunity to earn more in the months that follow.

Sophomore Trevor Keyser began driving for Razorback Transit when he was a freshman during the 2017-18 school year.

He was the subject of a recent article by senior Lexi DeLeon, one of the Transit and Parking Department's interns.

She wrote, "If you take Razorback Transit to school, you know there are a bunch of different drivers. Some play classic rock on the way to the Union and some say 'hi' to everyone that steps on to the bus. However, did you know that one of those bus drivers is a student? You might even have him in one of your classes…"

The entire article was featured on Talk T&P, a new WordPress site for Transit and Parking.

"I like my job because the flexibility of my schedule," Trevor said. "It is an on-campus job and my supervisors are either current students or recent graduates, and they know the difficulties of school and tests."

The training to drive a bus is quite extensive, and Razorback Transit will not put anyone on the road until they have thoroughly mastered the skills necessary to drive the bus and to drive it according to the strictest standards of safety.

But learning to handle the bus isn't as difficult as one might assume. The main thing that the drivers say you must remember is that you are handling something much longer than a regular vehicle, which is important to remember, especially when making turns.