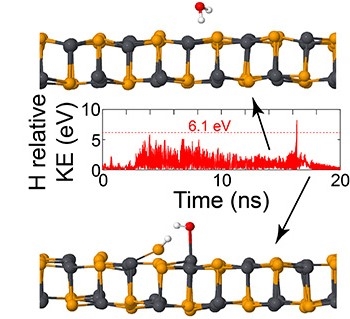 This image shows a water molecule breaking apart as it encounters a 2D material.

Ever since researchers at the University of Manchester used a piece of tape to isolate, or "exfoliate," a single layer of carbon, known as graphene, scientists have been investigating the creation of and applications for two-dimensional materials in order to advance technology in new ways. Scientists have theorized about many different kinds of two-dimensional materials, but producing them, by isolating one layer at a time from a layered three dimensional source, often presents a challenge.

In 3D form, these materials have many useful properties. For example, they are currently used in solar cells. Some group IV monochalcogenides are also ferroelectric when exfoliated down to the 2D limit, which means that they contain pairs of positive and negative charges that create a macroscopic dipole moment.

While some of these two-dimensional materials have been grown, no one has successfully peeled off a stable two-dimensional layer from a group IV monochalcogenide. In a recent manuscript titled "Water Splits to Degrade Two-Dimensional Group-IV Monochalcogenides in Nanoseconds" and published in the Journal ACS Central Science, Barraza-Lopez explained a possible reason for this.

Barraza-Lopez said that, even under the strictest experimental conditions, ambient water molecules can be found near these materials. And just like these materials, water carries an electric dipole too. Barraza Lopez explained that the interaction of dipoles can be observed in commonplace circumstances: "The pull of small pieces of paper with a comb that was recently used on dry hair can be explained as the effect of an inhomogeneous electric field in the comb accelerating macroscopic electric dipoles in that piece of paper nearby," he said.

Taneshwor Kaloni, a former postdoctoral associate in Barraza-Lopez's lab, performed computer calculations that emulate monolayers of these materials interacting with water molecules at room temperature and ambient pressure. The team demonstrated that when water molecules are close to these materials, they are attracted to them. This attraction creates an enormous build-up of kinetic energy, which leads to the splitting of the water molecules, and destabilizes the 2D materials as a result of this chemical reaction. Barraza-Lopez explained that he was surprised to learn that this process created enough energy to split water molecules, because the kinetic energy required exceeds 70,000 degree Celsius.

In a way, the difficulty in exfoliating these materials may lead to a new technology for hydrogen production off two dimensional materials, though many additional studies are required to achieve such goal.

This work was supported by the U.S. Department of Energy, Office of Basic Energy Sciences, under the Early Career Award DE-SC0016139. Calculations were carried out at Trestles (funded by multiple grants from the National Science Foundation, a grant from the Arkansas Economic Development Commission, and the U of A Office of the Vice Provost for Research and Innovation) and Cori, a supercomputer at the National Energy Research Scientific Computing Center (NERSC), a U.S. Department of Energy Office of Science User Facility operated under Contract No. DE-AC02-05CH11231.