PROMISE Getting Results for Youth With Disabilities, Report Shows 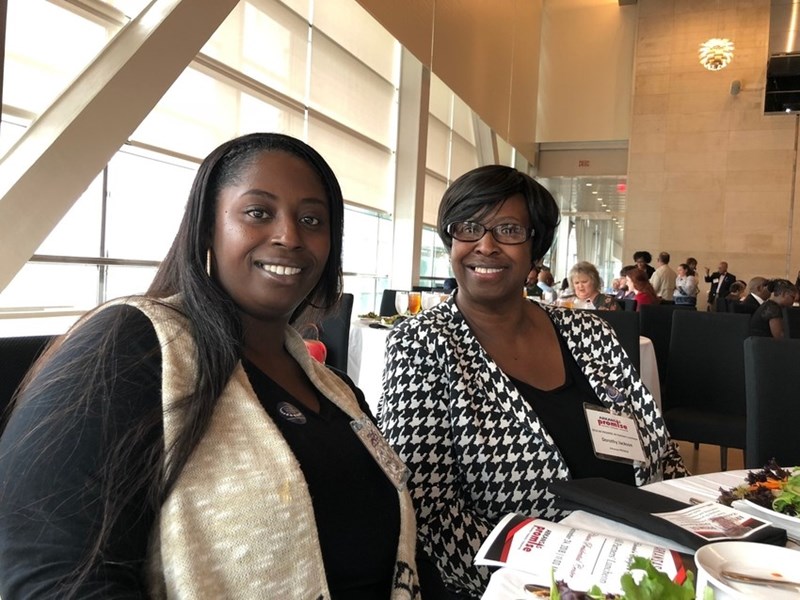 Dorothy Jackson, right, with her daughter, Monica Jackson, spoke about the positive effects of PROMISE on her grandson.

FAYETTEVILLE, Ark. – Dorothy Jackson of Little Rock choked back tears when she described how Arkansas PROMISE changed her grandson’s life. She was one of many who grappled with emotion Monday as they celebrated the end of the part of the University of Arkansas project that provided summer work experiences for 1,000 Arkansas youth with disabilities.

PROMISE is an acronym for Promoting the Readiness of Minors in Supplemental Security Income. The celebratory luncheon took place shortly after PROMISE officials received a process analysis report last week that showed 92 percent of the youth with disabilities who enrolled in the project received services or participated in the PROMISE components. Evidence suggests there was a marked difference between the service experiences of youth in PROMISE and a second group of 1,000 youth with disabilities who received the usual services offered in the state.

The research evaluation will continue for another five years as the youth are followed and data are collected and analyzed to determine the effect of the project. It was designed to improve the education and employment outcomes of youth with disabilities as well as to reduce reliance on public benefits.

Jackson told the audience of PROMISE staff members and partners from across the state who played important roles in the project that “PROMISE rocks.”

“Our hearts swelled with joy that he was getting to experience this life lesson,” she said of her grandson, who lives with a developmental delay. “Arkansas PROMISE transformed a boy who didn’t know his way to a young man who has become independent, responsible, making new friends and willing to find his way.”

Mathematica Policy Research evaluated whether Arkansas PROMISE was implemented in ways consistent with the federal government requirements. Mathematica, a national policy research and evaluation firm hired by the Social Security Administration to conduct a nine-year evaluation of the demonstration project, released a report that covered data collected through September 2017.  Mathematica will release an interim impact report later this year and a final impact report in the spring of 2022.

Some of the key findings:

The analysis also found that no comprehensive case management services similar to those provided by PROMISE were available to youth with disabilities in the state. Forging partnerships with other U of A entities and state agencies was vital to the success of the program, which served youth in 25 of the state’s 75 counties.

Five partner organizations provided program services and received funding: Arkansas Department of Workforce Services; Arkansas Rehabilitation Services; Sources for Community Independent Living Services; U of A Center for the Utilization of Rehabilitation Resources for Education, Networking, Training and Service; and U of A Partners for Inclusive Communities.

At the luncheon Monday, Philip Adams, program director, and Hershell West, co-director, introduced guests, and Corinne Weidenthal, education program specialist with the U.S. Department of Education, skyped in to thank the PROMISE staff and partners for their work. Tionna Jenkins, senior advisor with the Clinton Foundation, and Alan McClain, commissioner of Arkansas Rehabilitation Services, talked about the roles their organizations played.

PROMISE provided two paid summer work experiences of about 200 hours each as well as additional training and intensive support services for a group of 1,000 teens who receive Supplemental Security Income.

Dorothy Jackson talked about both her grandson’s experience working a summer job as well as attending summer camp, a component of PROMISE that offered information to youth participants about post-secondary education and careers as well as a chance to spend a week living on a college campus, having fun and making friends.

Several speakers said PROMISE also has brought about changes in systems that serve people with disabilities and has affected the thinking of some employers.

“After 34 years of working in the field of rehabilitation, I can tell you, if you think this is a special, one-of-a-kind thing, you are right,” Williams continued. “We have provided assistance and care and now it’s time to take the scaffolding down. It’s impossible to overstate the importance of this, and I hope you walk away feeling proud.”