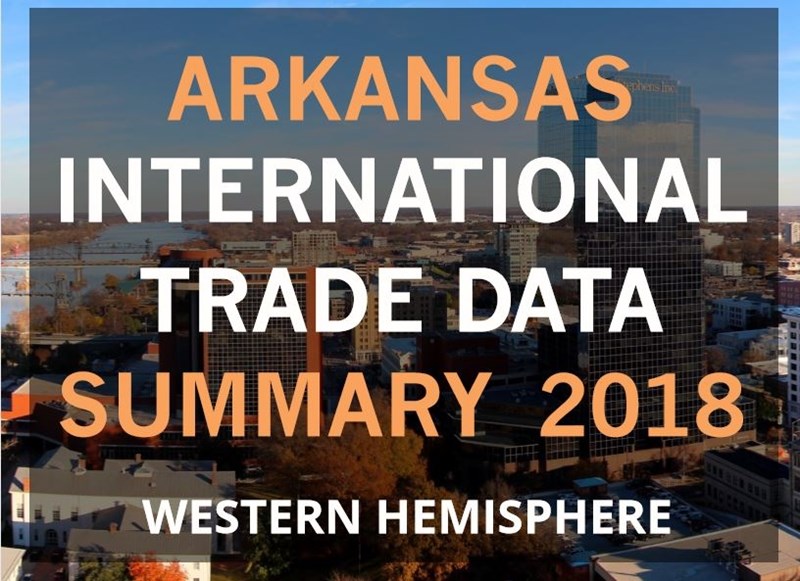 The World Trade Center Arkansas published an International Trade Data Summary this week for state, national and international business leaders and government officials. The summary released this week focuses on the Western Hemisphere, Arkansas' region of growth for the report and utilizes data from multiple sources including the International Trade Administration and the U.S. Census Bureau.

"We compiled the summary as a tool for Arkansas companies and government officials to make more informed strategic business and policy decisions," said Dan Hendrix, president and CEO of the World Trade Center Arkansas. "We presented the data in the summary to these decision makers either partially or on various occasions but we now have a document that condenses the most important information into three pages that are quick and easy to read."

The report highlights important trends in state imports, exports and trade-supported employment over the past two decades. Analysis revealed several significant trends such as:

"The Western Hemisphere is dynamic and the most active region for Arkansas exporters, showing growth and opportunities for trade," said Melvin Torres, director of Western Hemisphere trade at the World Trade Center Arkansas. "Canada and Mexico are consistently our top two partners every year with different countries taking the other places different years," he said. "We know from the data on the report that Arkansas companies have incrementally benefited from exporting to the region and we hope this summary will help business leaders strongly consider the Western Hemisphere for more opportunities."

The mission of the World Trade Center Arkansas is to grow trade and increase Arkansas exports by connecting Arkansas businesses to the world through international trade services. The Center is part of the University of Arkansas and serves as the trade promotion arm for the Arkansas Economic Development Commission. For more information and valuable updates, please follow the Center on Facebook and Twitter or subscribe to the World Trade Center Arkansas newsletter.