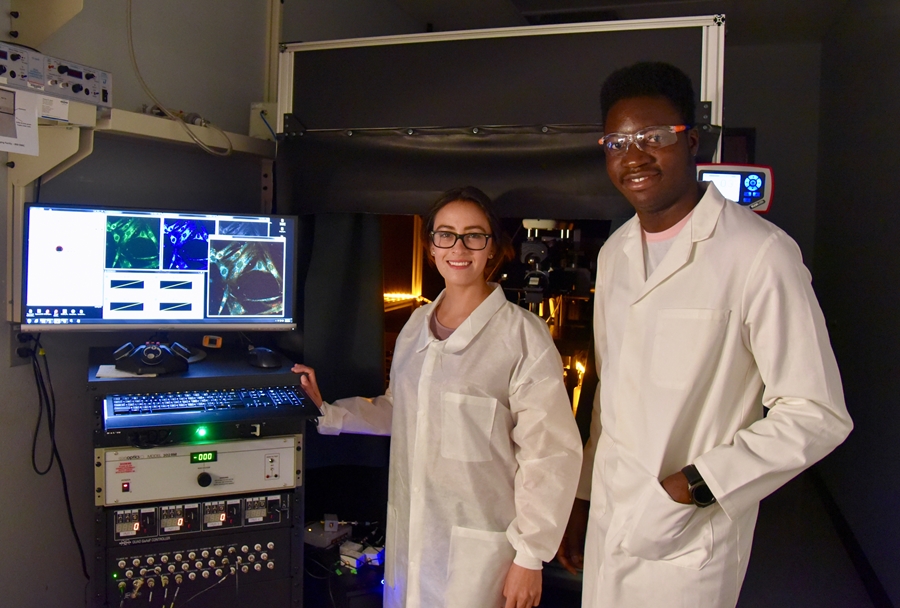 Interdisciplinary collaboration is paying off for two University of Arkansas doctoral students. Biomedical Engineering student Olivia Kolenc and Cell and Molecular Biology student Ajibola Bakare each received recognition at conference presentations based on their collaborative research into mitochondrial disease.

The pair's research focuses on Leigh's Disease, a progressive neuromuscular disorder that usually becomes apparent in infancy or childhood. The disease affects the brain and muscles, and is characterized by progressive loss of mental and movement. Depending on the severity of the defect, individuals often live anywhere from a few years to the mid-teens. Ultimately, they die from complications arising from abnormalities in mitochondrial energy production, resulting in respiratory or cardiac failure.

The prognosis for Leigh's disease is poor. There is an urgent need to better understand the disease in order to develop meaningful tools to diagnose it. The pair's research uses complementary approaches involving state-of-the-art advanced biochemical and imaging techniques to correlate the gene mutations to the abnormalities in mitochondrial energy production, using skin cells from Leigh's patients.

In June, Kolenc received a travel award to present the findings at the 2nd Britton Chance International Symposium on Metabolic Imaging and Spectroscopy in Philadelphia. Bakare earned a "best poster" award when he presented the findings at the United Mitochondrial Disease Foundation Annual Symposium dedicated to Mitochondrial Medicine in Nashville. Both students also received funding from the University of Arkansas Graduate School and International Education to help make the trips possible.

For Bakare, the opportunity to attend the symposium shed new light on the research when he met fellow researchers, patients and families impacted by mitochondrial disorders.

Bakare said his most remarkable moment was a conversation with a father whose daughter was battling Leigh's Disease.

The father said, "find my daughter a cure and I'll buy you dinner the next time I see you." It was spoken in jest, but Bakare said the underlying meaning has been motivating him ever since. Bakare said he hopes to assist with the discovery of a molecular charger that could rejuvenate and provide a better quality of life to people suffering from Leigh's and other mitochondrial disorders.

Kolenc said her experience was a welcome chance to connect with fellow researchers.

"Attending the Britton Chance Symposium was my first opportunity to meet other researchers in my field," she said. "Being exposed to their work in this way gave me new ideas for improving my own work and increased my drive to fill in gaps in the knowledge base that could advance metabolic imaging and its application in diagnostics, therapeutics and other scientific studies."