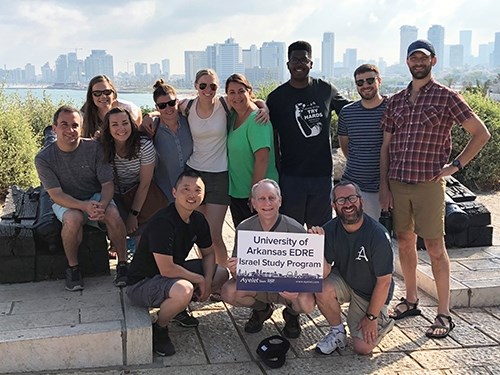 Doctoral students in education policy gather with faculty guides in front of the Tel Aviv coast and skyline.

University of Arkansas doctoral students of education policy visited Israel to compare and contrast the educational system of the barely 70-year-old nation with that of the United States, while experiencing the sites of a region whose history reaches back into antiquity.

The Department of Education Reform sponsored its first study abroad trip this summer since it began accepting students into the graduate program in 2008. The department partnered with Shalem College in Jerusalem, the country's first dedicated liberal arts college, for the trip that was designed to promote exchange of understanding, perspectives and ideas on education reform. Bob Costrell, who holds the Twenty-First Century Chair in Education Accountability, and Jay Greene, who holds the Twenty-First Century Chair in Education Reform, led the 10-day trip with eight students.

The group spent time in Jerusalem, Galilee and Tel Aviv. Their itinerary included visits to the Dead Sea; Yad Vashem, Israel's memorial to the Holocaust; Jerusalem's military cemetery with the graves of historical figures Golda Meir, Yitzhak Rabin and Shimon Peres; the city of David outside Jerusalem's Old City walls; the Mt. of Beatitudes, where the Bible says Jesus delivered the Sermon on the Mount; the Western Wall Tunnels; and the Ayalon Institute, an underground ammunition factory that played a pivotal role in Israel's fight for independence.

They also enjoyed a Shabbat dinner with a local Jewish family.

After earning bachelor's and master's degrees in Texas — and teaching English in France for one year — Molly Beck decided to become a teacher and received alternative certification in Texas. She taught French and government in Texas, before enrolling at the U of A.

"In my master's program, I was interested in being a policy analyst in state government in order to effect change in the public education system, but I had more research questions I wanted to answer so a Ph.D. made sense," Beck said. "I'm really interested in educational outcomes."

Elise Swanson has a bachelor's degree in political science and English from the University of Wisconsin. She described the trip as focused and relative. Her dissertation will be on equity and access in outcomes for post-secondary education, specifically how higher-education institutions can increase opportunities for low-income students, students of color and first-generation students.

Beck and Swanson are both Distinguished Doctoral Fellows.

During the spring semester, the students read about the history of the region and of Israel. They researched various education issues and presented what they found in class.

Public schools in Israel are formed along religious lines, Beck said, more than in the United States, where religious schools are generally private schools that don't receive public funds. Israel offers Jewish, Muslim and secular public schools. Even the secular schools include religious study in the curriculum. Israel is a Jewish state so, of course, religion is closely tied to government, but there also exists a wide difference in how much religion people want in their schools, she said.

The group visited both educational and historic sites together with a guide, and that — combined with the total of about 12 hours of in-flight time each way — gave the students and faculty a chance to bond, Beck said.

"When you are in very close quarters with people and spend all your time together, even your free time, it makes a difference," she said. "Outside the context of a classroom, getting to know people will inform how we interact in the classroom. We are a small department so we hang out together anyway, but this opportunity to learn about a new culture at the same time opened up the world."

Other than the liberal arts college the group partnered with, universities in Israel focus heavily on science, technology and business. The U of A group also visited a unique, bilingual school that taught in both Hebrew and Arabic, as well as English, to kindergarten through sixth-graders. The school promoted understanding and togetherness in both school and outside life, Beck and Swanson said.

"We saw the way these schools were trying to navigate that," Swanson said. "They were bringing people together. It was very interesting talking to people who are doing the work to make a difference."

The trip gave her a better global understanding of education, Beck said.

"For me it was about seeing how our systems are similar but in different contexts they have different outcomes," she said.

College degree programs are typically shorter, only two or three years, because students are expected to have already learned the basics of a broad curriculum in high school and start directly in the courses of their major.

"The universities in Israel are not vocational schools but they tend to focus on the vocational side," Swanson said. "You get a degree for a job, not to figure out who you are."

It's possible, time spent in military service serves as that reflective time for Israeli youth, she said.

Higher education is also more subsidized with lower tuition and a stipend from military service, Swanson said. Many students also work full time while going to school, and fewer receive parental support that is more common in the United States. Completion rates are similar to those in the United States.

"The trip gave me a lot to think about," Swanson said. "We have some of the same inequalities — who goes to college and who finishes. In both contexts, we need to address gaps. We face similar challenges.

"I taught before and my way of thinking about problems and solutions was shaped by that," continued Swanson, a member of Teach for America for two years in Pine Bluff. "Now, seeing a different educational system makes me look more critically at what we do. It helps you take a step back and ask yourself if it's inevitable that we do what we do."