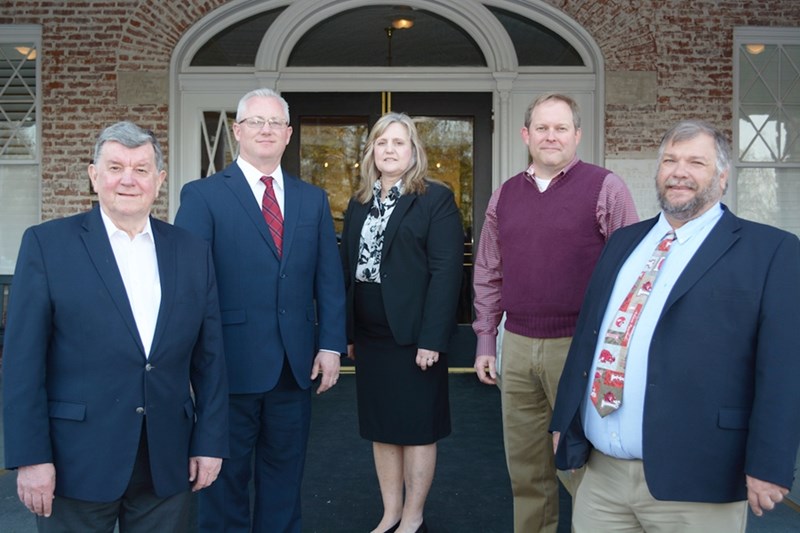 Membership in the Academy is reserved for chemical engineers who "bring honor to the profession as practitioners and as citizens, especially those who are graduates of the Ralph E. Martin Department of Chemical Engineering at the University of Arkansas."

This year's inductees are:

After graduation, Crawford worked for two years as a Process Engineer at Lion Oil Company in El Dorado, Arkansas, and in 1995, he began working in the polyurethane foam industry as an environmental engineer for Crain Industries, Inc. In 1997, Crain Industries merged with Foamex, L.P., and Crawford moved into engineering services in polyurethane foam manufacturing. He joined Gulbrandsen Chemicals, Inc., in 2003, where he worked as an engineering consultant and senior engineer producing tin catalysts and flame retardants for the foam industry. He joined Peterson Chemical Technology in 2008 and worked designing and producing raw materials, formulations, and production technologies for specialty viscoelastic polyurethane foams used for mattresses and furniture. In 2011, Crawford became vice president of manufacturing and engineering at Peterson. He is co-inventor of five patents assigned to Peterson Chemical Technology. Crawford was licensed as a Professional Engineer in the State of Arkansas in 1999 and received the Fred M. Carter Award for obtaining the highest score on the Professional Engineers' exam.

After graduation, Gilliland joined Texas Instruments (TI) Defense Systems division as a process engineer.  She implemented wastewater process control techniques to removal metal by-products and developed molding compound encapsulation methods for surface mount technologies.  Gilliland transferred to a division role qualifying new formulations in defense applications and was the first to implement water-based paints for TI military systems. After being elected by her peers to the TI Group Member Technical Staff in 1995, she joined the semiconductor division as a facility technology engineer.  During this time, she researched emerging control technologies for capturing, recycling and abating process emissions of greenhouse gases and abating corrosives.  Gilliland authored several process emissions control studies that were published and presented at technical forums for the Semiconductor Industry Associations (SIA) and SEMATECH. She was recognized as Senior Member Technical Staff in 1998 for contributions to improve process emissions control technologies. Gilliland then joined the TI Environmental Safety and Health (ESH) organization to manage the air emissions permits for multiple manufacturing sites. Representing TI on SIA's committee, she played a key role in developing the ability to accurately measure greenhouse stack emissions and statistically correlate with process gas usage. The EPA implemented the new stack method into the regulation.  Later, she moved into her current role as the corporate environmental risk and compliance auditor traveling to TI's manufacturing sites globally.

Freeman has worked extensively in the areas of crude atmospheric and vacuum distillation, many types of hydro-processing, and general hydrocarbon fractionation. He has co-authored two papers that were presented at AFPM annual meetings and included in other industry publications. Early in his career, Freeman had the distinct honor of working for Petrofac while being mentored by Ralph E. Martin, now the namesake of the Department of Chemical Engineering. Freeman has held various positions from Process Engineer to Vice President in his 30-year career for Howe-Baker Engineers, Petrofac, CB&I, KP Engineering. and Primoris Design and Construction.  He is currently Chief Process Engineer for Primoris Design and Construction in Tyler, Texas. Freeman is a registered Professional Engineer in Texas and Oklahoma and a member of AIChE.

After graduation, Keel moved to Cincinnati in 1971 as an environmental engineer with the Procter and Gamble Company. He left P&G in 1973 to work for The Henry P. Thompson Company, a privately held regional sales and marketing firm in the water and wastewater treatment capital equipment market. Over a 22-year period he became the owner and President/CEO of HPT. He sold his interest in the company in 1995. He earned an MBA from Xavier University in 1987.

Keel has developed a local, national and international reputation as a performance-based online marketing expert, having been actively involved in this arena since January of 1997. In addition to being CEO of Improved Results, which he founded in September, 1997, he co-developed the Xavier University MBA E-Business program, where he taught online marketing and e-commerce, for more than three years. Since 2008, his business has focused primarily on expanding online presence, reputation marketing, and conversion improvement for local and regional businesses. He and his wife, Colleen, live in Cincinnati. Keel is a past member of the Board of Executive Advisors for the Williams College of Business at Xavier and a current member of the Dean's Advisory Council for the College of Engineering at the University of Arkansas.