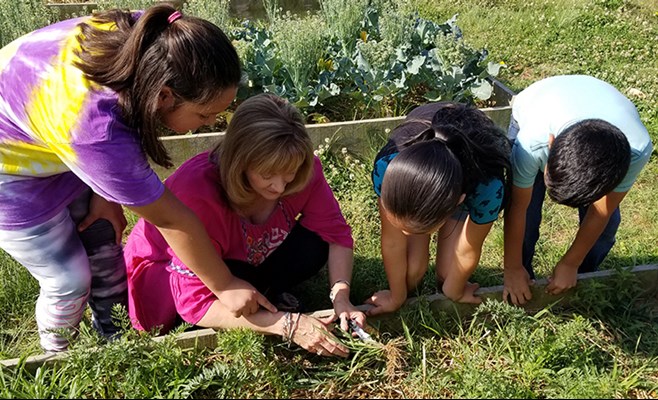 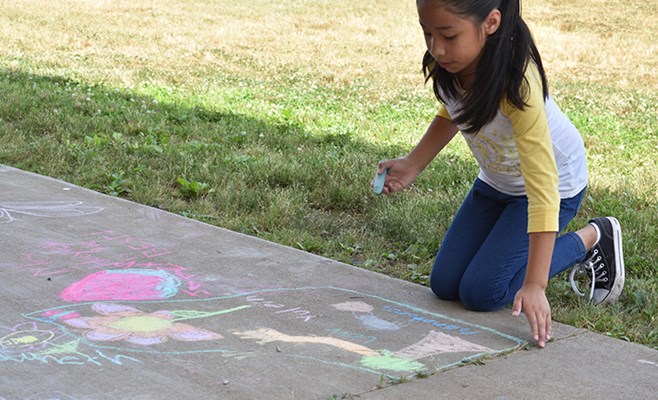 A child chalks a drawing of the growing life cycle at the school. 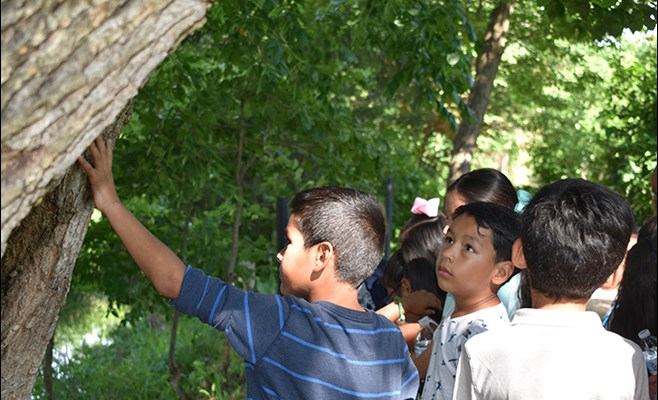 Bayyari students touch “Ashley,” a tree at the Botanical Garden of the Ozarks. 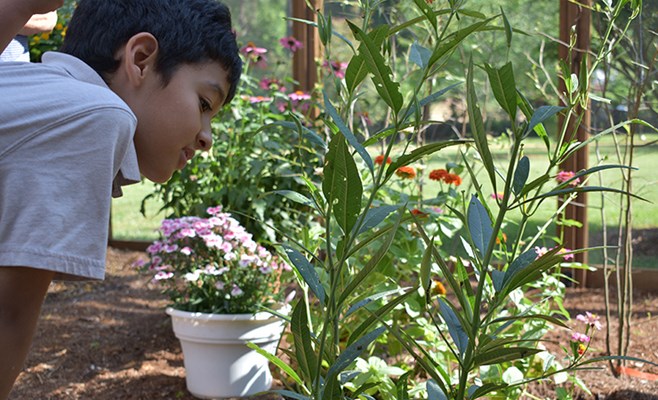 A Bayyari student looks closely at a caterpillar in the butterfly enclosure. 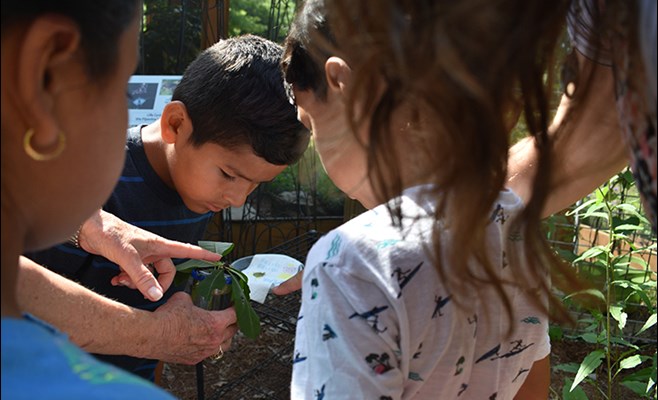 A “butterfly nanny,” not pictured, points out a caterpillar. 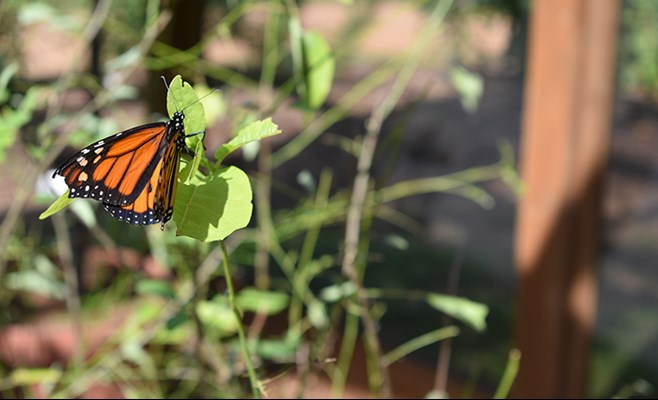 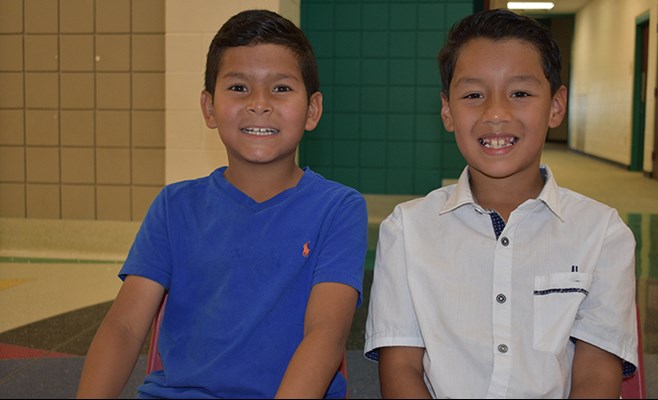 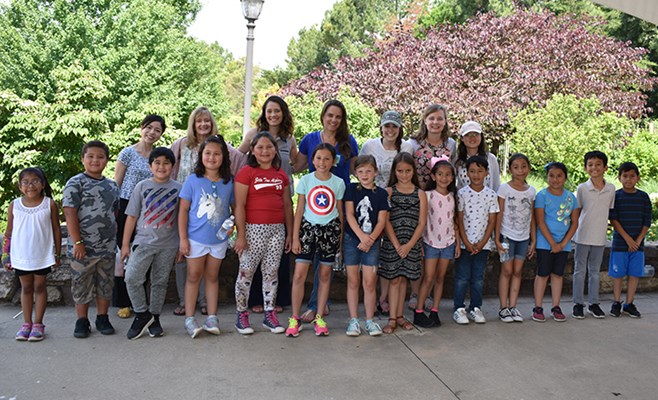 The children and their teachers pause for a group picture before going to the Fayetteville Farmers’ Market. 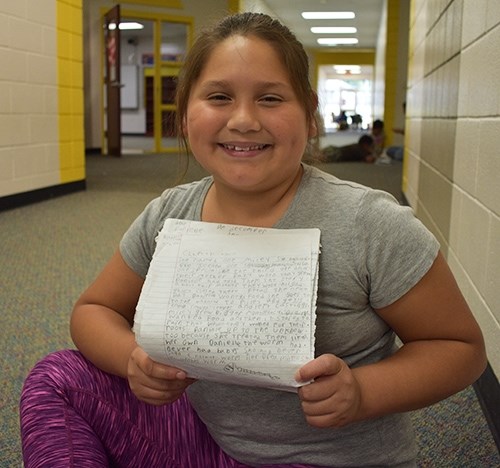 Alison shows the story she wrote about Daniella the earthworm.

Eight-year-old Alison created "Daniella," an earthworm, or queen decomposer, as the main character of a story she wrote for the ESL science camp put on in June by the University of Arkansas at Bayyari Elementary School in Springdale.

Most girls her age find earthworms yucky, but Alison said she learned during camp that earthworms are quite an important part of the growing cycle of plants. Earthworms eat decomposing plants and, after digesting them, leave castings that makes minerals and plant nutrients accessible for plants to use.

Alison, who will be a third-grader in the fall, described Daniella's friendship with a flower in her story. A thunderstorm killed the flower, but Daniella took care of its three seeds so they would grow.

Tina Howlett, assistant professor of teaching English to speakers of other languages, developed the camp last year as a way to improve the language skills of children who speak English as a second language.

Howlett's attention was initially drawn to Bayyari Elementary School for the ESL camp location, not only because of the high population of English language learners, but also because the outdoor garden would provide the benefits of experiential and hands-on learning and could incorporate a wide variety of interdisciplinary studies such as science, math, language, visual arts and nutrition. Opportunities to work hands-on with content and language are critical for English language learners and can increase achievement and English language development, she said.

"School gardens give children a sense of pride in their contributions and can also connect English learners to the local history of their new communities," Howlett said.

The two-week camp also provides practical experience for university students who teach the children under the supervision of Donna Owen, a clinical instructor who serves as the university's liaison at Bayyari. Owen's long-term ties to Bayyari and the U of A have been instrumental to the success of the partnership program, Howlett said.

Owen and Felicia Lincoln, associate professor, wrote a grant proposal for funding awarded by the Education Renewal Zone, also based in the College of Education and Health Professions. The funding was used to buy four high-quality science books for the children, as well as to pay for the field trips, Owen said.

Howlett interviews the university interns who participate as part of data collection for research on ESL teaching methods and experiential learning for teacher candidates. Owen is studying the vocabulary development gains of the elementary-school children.

Both years, the camp has focused on science, particularly the life cycle of plants. The camp included two field trips, one to the Botanical Garden of the Ozarks and one to the Fayetteville Farmers' Market, which expanded the children's knowledge about growing plants, including food.

On the last day of camp, families visited school to see the projects the children completed and hear them sing a song about the plant life cycle.

Aaron and Michael, also 8 years old, said the camp was both a learning experience and a chance to hang out with their friends.

"Our teacher said if we were interested in this exciting camp to take the paper home to our mom and dad," was how Aaron said he learned about the camp. "I like science but I wanted to come because my friends wanted to go, too."

The field trips gave them a chance to see more about what they were learning in class, Michael said. Each child received $5 to spend at the farmers' market and he bought a chocolate raspberry brownie but also lettuce and a green pepper. He saved part of his brownie to share with his little brother and gave the vegetables to his mother to use in a meal.

Michael said he wants to be a scientist who studies bugs when he grows up, and Aaron said he is interested in studying math. Both also said camp was a little more fun than normal school.

The five U of A master's students who taught at the camp came from four programs — world languages, literatures and cultures in the J. William Fulbright College of Arts and Sciences and elementary education, secondary education and teaching English to speakers of other languages, all in the College of Education and Health Professions. Participation in the camp was a requirement in their second-language methodologies course taught by Owen in the first summer session.