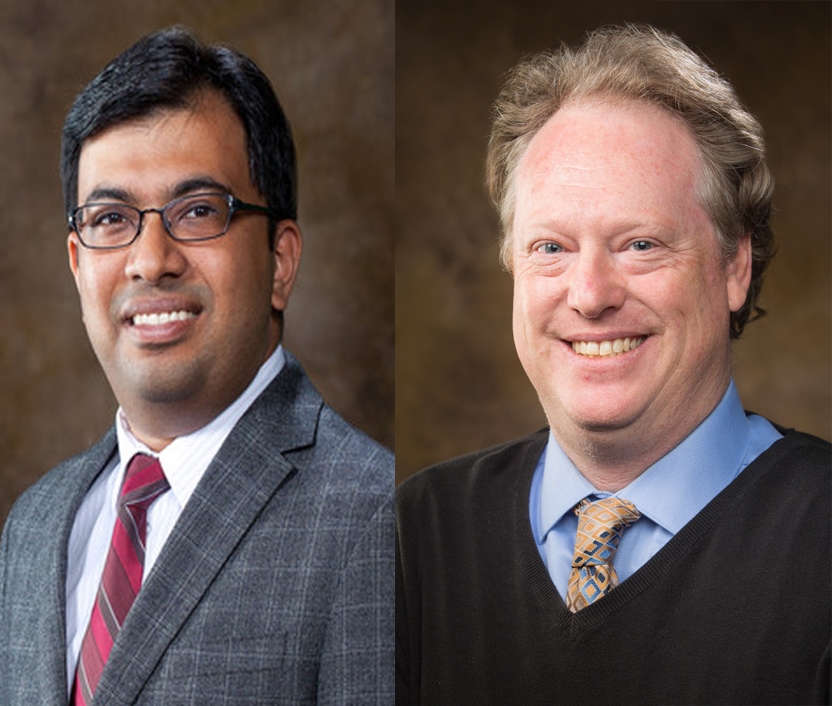 FAYETTEVILLE, Ark. – Two biomedical engineering professors at the University of Arkansas have been awarded $375,000 from the National Science Foundation to study how repeated injuries over time impact the human brain.

Associate professors Kartik Balachandran and Jeffrey Wolchok in the College of Engineering received the grant as part of a three-year project to investigate what happens to the brain when it receives multiple non-severe injuries, such as concussions.

It’s a research area with wide implications, but one that has received little attention from the research community.

“There’s been a lot of importance given to studying severe traumatic brain injuries, but this is an understudied aspect,” Balachandran said. “These injuries may be below the threshold of ‘severe,’ but with repeated injury, that damage can accumulate.

“Everyone has someone they know who has been affected by this kind of injury,” he said. “Whether it’s from the sports field or the battlefield, traumatic brain injuries are a major problem.”

The project focuses on building a “brain on a chip,” a device based on the design of a computer chip, that simulates the blood-brain-barrier, the area between the blood vessels in the brain and the brain itself.

Researchers need to understand what happens to the blood-brain-barrier after an injury to facilitate the development of drugs that can successfully make their way into the brain to treat the injury.

“It’s a miniature version of a blood-brain-barrier that we can impact over and over again and study the results,” Balachandran said. “If we can understand the blood-brain-barrier impairment, it will benefit anybody who’s had a brain injury or concussion.”

Beyond injuries from sports or battle, Balachandran said, the elderly are prone to the type of non-severe brain injuries that would be affected by this research.

“In the aging population we’re seeing more traumatic brain injuries as falls result in head injuries,” Balachandran said. “If we can understand biologically what happens after one and many injuries, we can develop a therapeutic strategy to treat them.”

Developing a chip that can accurately imitate the blood-brain-barrier would make the drug testing process much more efficient, Balachandran said.

When pharmaceutical companies need to test the effects of a drug, they often begin at the cellular level, then move up to mice and other animals before eventually testing a refined version of the drug in the human body. The “brain on a chip” would allow researchers to skip many of those steps and study results at a human level immediately.

Funding from the grant will also help support a summer camp to encourage high school students to learn more about biomedical engineering.

“The recruiting of scientists and engineers has always been a challenge for colleges and universities,” Wolchock said. “The camp is intended to create a spark of interest in engineering that we hope will motivate students to pursue higher education.”

The camp is entering its fifth year this summer.

“Receipt of this award by Drs. Balachandran and Wolchok is a testament to not only their collaborative research efforts focused on traumatic brain injury, but also their commitment in ensuring the next generation of scientists and engineers are made aware of contemporary biomedical engineering solutions for understanding and treating an important health issue,” said Raj Rao, professor and department head of biomedical engineering.