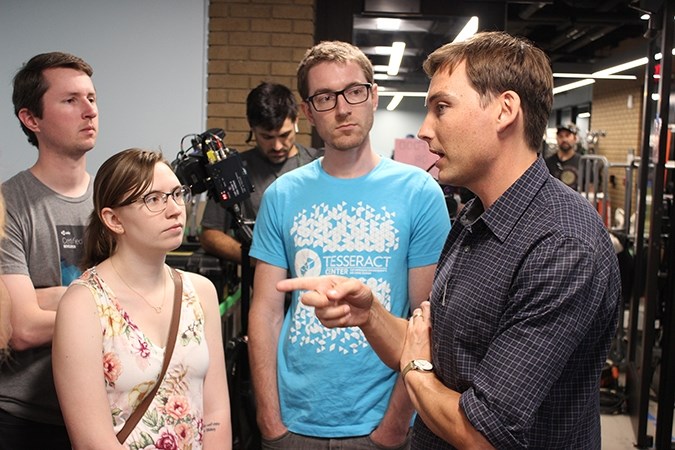 Evan Eastham, location manager for the HBO series "True Detective," explains the equipment used and the staff expertise needed to shoot a scene for the cable series.

FAYETTEVILLE, Ark. – University of Arkansas students and staff recently watched an experienced, professional film crew set up and shoot scenes for the HBO series True Detective: Season 3, which was on location at the Global Campus in downtown Fayetteville.

Evan Eastham, location manager for the HBO series, escorted small groups of students and staff to the southwest corner of the fifth floor of the Global Campus building to let them watch professionals in action. Eastham whispered as he explained the equipment, described the roles of staff and answered questions. 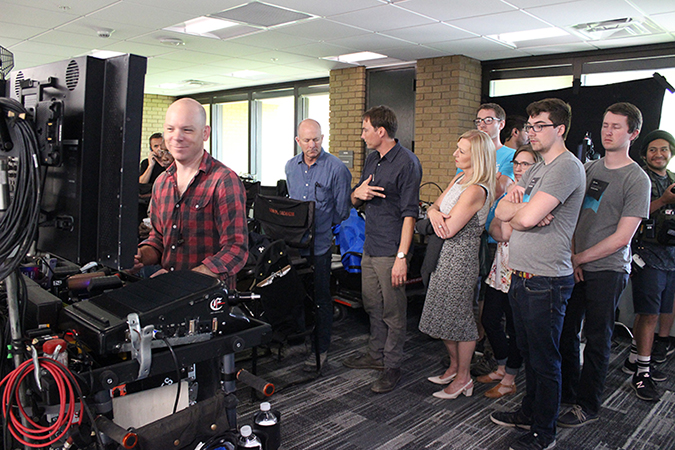 “I was in film school,” Eastham said. “I was a film student. Being on the set was the best education for me.”

Random Productions LLC is shooting the third season of the series, which was created by Nic Pizzolatto, a graduate of the U of A Program in Creative Writing and Translation. This season is set in the Ozarks, so much of the shooting is taking place at locations throughout Northwest Arkansas, including many locations in Fayetteville, Bentonville, Lincoln, Rogers and Springdale. The crew set up to shoot a scene in the Global Campus Building on May 6, filmed scenes May 7, and removed everything on May 8.

“It’s just a lot to take in,” said Rachel Murray, a project manager on the staff of the Tesseract Center for Immersive Environments and Game Design in the J. William Fulbright College of Arts and Sciences at the U of A. “It’s enough to see it and experience it.”

Ambrosia Johnson, a student intern at the Global Campus and recent broadcast journalism graduate, said she was intrigued by the number of teams needed for a shoot.

“It was cool to see the different branches of the set: the main set where they were acting and then the control room,” Johnson said. “They had the make-up artist there, and everyone was crammed into one space, getting it done.”

Whitney Winkler, another Global Campus intern and recent broadcast journalism graduate, said, “They worked as a team, while simultaneously working as individuals. Each had their own roles, but they were relying on each other to fulfill their roles effectively.”

“There was almost like this body language in their communication,” added Greg Rogers, the design and narrative lead on the Tesseract Center staff.

Nicholas Wise, an architecture graduate and graduate student at the Tesseract Center, said he noticed that the film crew paid attention to “the tiniest details.”

Forrest Follett, a graduate student at the Tesseract Center and an anthropology major, said the film crew’s attention to detail helps viewers suspend their disbelief and immerse themselves in the story, a phenomenon he described as the “magic circle.”

“When you’re paying attention to the details, the viewers are not having to make some cognitive leap to get into the magic circle,” Follett said.

Winkler said, “It’s also great to see people enjoying what they do, being creative.”

Permission to Film at the U of A

Donald Judges, vice provost for distance education, worked with Provost Jim Coleman and the U of A’s legal counsel to gain approval for HBO to shoot scenes in the Global Campus Building.

“We accepted HBO’s request to use our space for two important reasons,” Judges said. “First, we saw it as an exceptional learning opportunity for students and staff, and we reached out to the Tesseract Center to be part of this experience. Second, we want to support the growing film industry in Arkansas because it enhances our state’s economy and provides a growing job stream for Arkansans.” 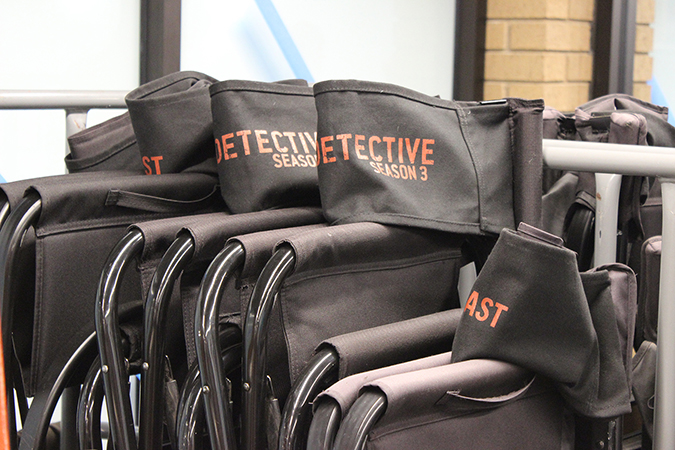 HBO’s location team toured the newly renovated Global Campus Building and learned what students and staff do in the media production suite, the production studio, the instructional design and learning technology suites, and other parts of the building.

The Global Campus teams provide creative, innovative support to academic colleges for the development of online courses and programs, as well as on-campus courses that use learning technology. Teams provide digital content, animation, online pedagogical strategies and help with learning technology, including Blackboard Learn, the U of A’s learning management system for classes online and on campus.

About the Global Campus: The Global Campus supports U of A colleges and schools in the development and delivery of online, distance and workforce education programs and courses. It provides instructional design services, technology services and assistance with marketing, recruiting and strategic academic development.

About the Tesseract Center: The Tesseract Center for Immersive Environments and Game Design launched in 2015, although its work began years earlier under the guidance of David Fredrick, who leads the center. The center provides a computer lab and infrastructure to support educational projects that foster entrepreneurship and economic development through the creation of intellectual property. U of A students learn skillsets in 3D asset creation, interaction design and coding, and virtual reality content creation. The center operates under the Office of Research and the J. William Fulbright College of Arts and Sciences.