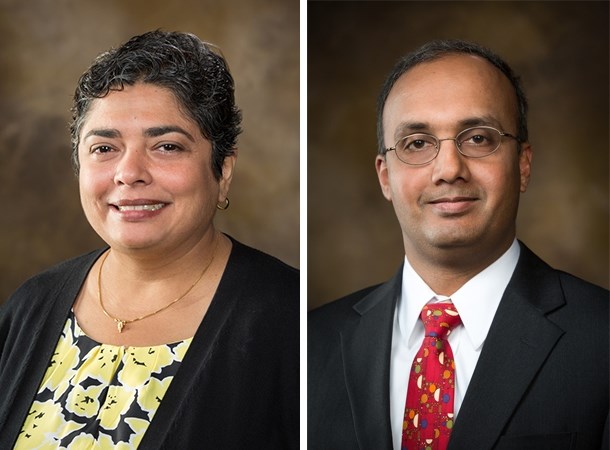 Shilpa Iyer, assistant professor in the Fulbright College Department of Biological Sciences and Raj Rao, professor and head of the Biomedical Engineering Department, have coauthored a research paper recently published in scientific journal PLOS ONE.

The research reveals a new behavior in stem cells with implications for producing specialized cells types from stem cells. Stem cells have unique regenerative abilities to develop into a variety of different cell types, but the different molecular mechanisms that can act in synergy and drive differentiation are not yet fully understood.

Entitled, "Knockdown of CDK2AP1 in human embryonic stem cells reduces the threshold of differentiation," the paper explores the role of the Cyclin Dependent Kinase-2 Associated Protein 1 (CDK2AP1) in stem cell differentiation and self-renewal.

CDK2AP1has lately gained importance in the field of stem cell research, with initial studies identifying it as one of the stem cell-specific genes enriched in both embryonic and adult stem cells.

In the paper, the authors report on a study in which they investigated the role of CDK2AP1 in human embryonic stem cells (hESCs).  Using genetic tools to reduce its expression in hESCs, they found, among other things, that CDK2AP1 knockdown resulted in a significant reduction in the expression of key genes involved in the pluripotent network, as well as an increased number of embryoid bodies (EBs) formed when differentiation was induced.

Overall, the results of the study reveal a novel function for CDK2AP1 in the self-renewal and pluripotency of human embryonic stem cells: the knockdown of CDK2AP1 in hESCs results in increased p53 protein expression, enhances differentiation potential and favors it over a self-renewal fate. The study demonstrates the close connection between cell cycle regulation and pluripotency and how a change in one will most likely affect the other. Results from the study has implications in developing directed differentiation strategies towards producing specialized cell types from stem cells.

In addition to Iyer and Rao, two other researchers, Khaled N. Alsayegh of King Abdullah International Medical Research Center in Jeddah, Saudi Arabia; and Steven D. Sheridan of the Center for Genomic Medicine at Massachusetts General Hospital and Harvard Medical School participated in the study. The research was primarily supported by NIH-R15NS080157-01A1 funding received by Dr. Iyer.