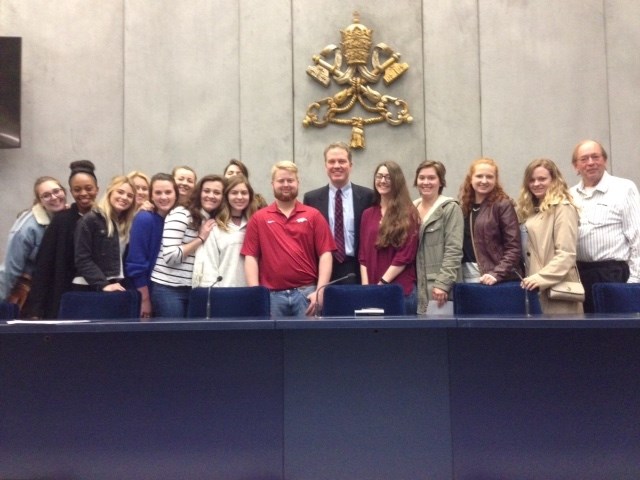 University of Arkansas journalism and communication students with Greg Burke, director of the Holy See Press Office, in the Vatican's public press room

Greg Burke, director of the Holy See Press Office, spoke to University of Arkansas communication and journalism students studying at the university's Rome Center on April 4. The students met with Burke in the Vatican's public press room, near St. Peter's Basilica in the Vatican. Vatican City is the world headquarters of the Roman Catholic Church.

Burke provided information about his education and background in journalism, including his work at Time magazine and Fox News Channel. Burke discussed the duties of the Press Office, including posting a daily bulletin online that identifies the audiences the Pope has each day, logistical information, as well as resignations and appointments at the Vatican.

He explained that the press-related and public relations duties and functions for Pope Francis are similar to such duties for the head of state of a country. As Pope Francis is the face of the Catholic Church, Burke must ensure that accurate information about the Pope, his schedule and his activities are disseminated in a timely fashion. Burke also answers inquiries about the Pope's public statements and activities and may travel with the Pope when he visits other nations.

Burke told the students how social media changed the day-to-day job at the Holy See Press Office. Previous directors of the press office might only have had to respond to inquiries from newspapers and radio, then television. Sometimes it was several days before stories about the Pope's activities appeared in the news. Now, the Pope's activities and messages appear moments after they occur. That means the Press Office personnel must always be ready to respond immediately to commentary regarding the Pope or the Catholic Church on social media.

Burke also answered student questions. One student asked whether the Pope relies on polling and public opinion, just as presidents or prime ministers do. Burke explained that many heads of state must be concerned about how their performance is rated by the public in polls, because they must represent the wishes of their constituents and are regularly voted in or out of office. However, Pope Francis makes decisions and acts based on the teachings of the Catholic Church and its moral principles, as he is the spiritual leader of a worldwide faith.

The students said they appreciated the visit and enjoyed learning from Burke.

"I loved getting to see the inner workings of the Vatican's media services," said Connor Lane, a University of Arkansas senior majoring in journalism. "Getting an insider's view of one of the lesser-known entities in the world was a once-in-a-lifetime experience. Mr. Burke was a great host, as well. He was very conversational and personable, while also providing invaluable information about his day-to-day life."

The communication and journalism students at the University of Arkansas Rome Center also visited the Roman Forum and Foro Italico to learn how propaganda was used in ancient and modern Roman history. Additionally, students visited the United Nations Food and Agricultural Organization to learn how it represents its activities using public relations.

Professionals from a major media outlet and public relations firm have spoken to the communication and journalism classes as well. Rob Wicks, a communication professor, and Jan LeBlanc Wicks, a journalism professor, both of the J. William Fulbright College of Arts and Sciences' School of Journalism and Strategic Media, teach the courses.

Francesco Bedeschi, assistant director for academics at the Rome Center, worked hard to make the contacts and set up the visits, while Davide Vitali, director of the Rome Center, provided support for these and other efforts on behalf of the students. The communication and journalism students are studying at the Rome Center through the first week of May.