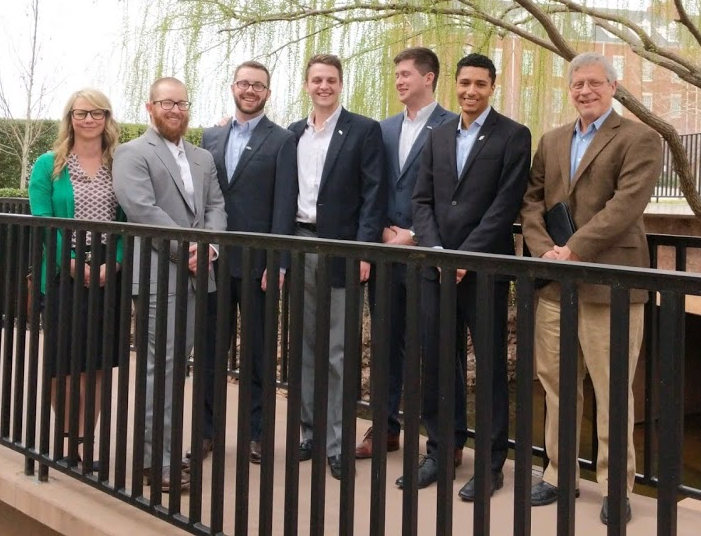 Five Master of Science geology students in the Department of Geosciences represented the U of A at last weekend's Imperial Barrel Award competition in Oklahoma City. Asher Boudreaux, Christain Falzone, David Kilcoyne, Josh Stevens and Griffin Warner  competed on Saturday, March 17. The faculty advisor for the team was Steve Milligan and industry advisor was Jamie Woolsey of PQGeoconsulting.

The Imperial Barrel Award Competition is offered every year by the American Association of Petroleum Geologists. It is a prospective basin evaluation competition for geoscience graduate students from universities around the world. Regional competitions send their first place winners to an international contest. The U of A  team competes in the Mid-Continent division, which this year also included Wichita State University, Oklahoma State University, the University of Oklahoma, and Kansas State University.

Devon Energy  and Chesapeake Energy, both Fortune 500 companies, hosted and ran this regional event in Oklahoma City.  Housing and meals were provided to the teams and their coaches; presentations were done in front of four judges in a meeting room on the Chesapeake campus. Participants made connections, meeting many professionals in the oil and gas industry. Carolyn Brown (BS Geology 2013, MS Geology 2015), a participant in the department's 2014 team, now works for Chesapeake and facilitated the mid-continent regional competition.

The goal of the project is to assess provided data as if the team were sent to an industry data room with the task of reporting back to senior management with a specific recommendation regarding the opportunity. All regional teams receive the same data set that is evaluated for its petroleum potential. The team must assess each petroleum systems element:  source, generation, reservoir, trap, and seal. Prospects were defined by potential hydrocarbons in place and prospect risk was determined. The U of A team defined two prospects in the Bight Basin offshore area of South Australia. Team members divided duties to evaluate this data and prepare a prospect that has the greatest potential for producing oil or gas. The judges are association members and experienced prospectors from this exploration industry. The presentations are limited to 25 minutes and the teams must answer all questions.

Kingdom and Petra software donated by IHS was heavily used by the team.

"One of the hardest things was getting familiar with software that is common among oil companies," said team member Christain Falzone. "The easiest part had to have been doing background research on our study area."

Maps, well logs and seismic lines were uploaded into the Kingdom and Petra programs, so that cross sections and spatial analysis could be used to create the geologic history of the area.

Team member Asher Boudreaux said, "Although it's stressful, the end result is rewarding. There is no better way to gain knowledge and experience toward the oil industry than competing in IBA. I am very proud of our team and how we represented the University of Arkansas."