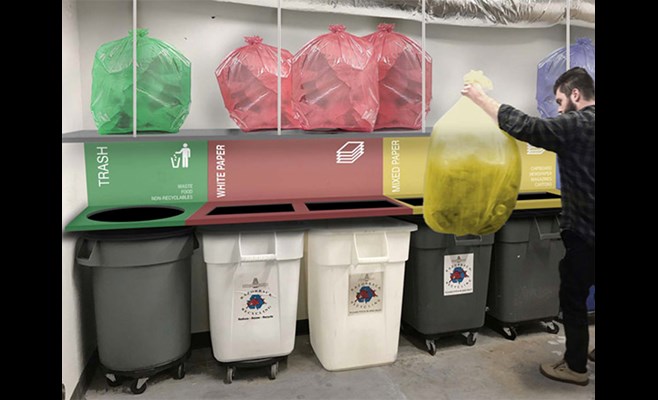 The Disposables project sets up a recycling hub that is functional, accessible and user-friendly for both students and custodial staff. 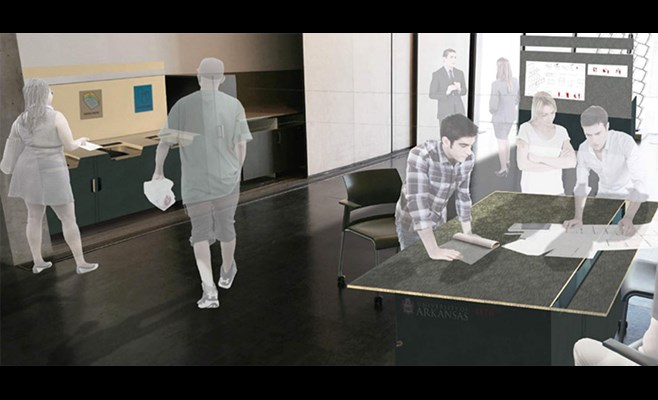 The Trash Talkers project collects trash and recyclables in free-standing maneuverable hubs, which can be converted into table workstations or pin-up spaces. 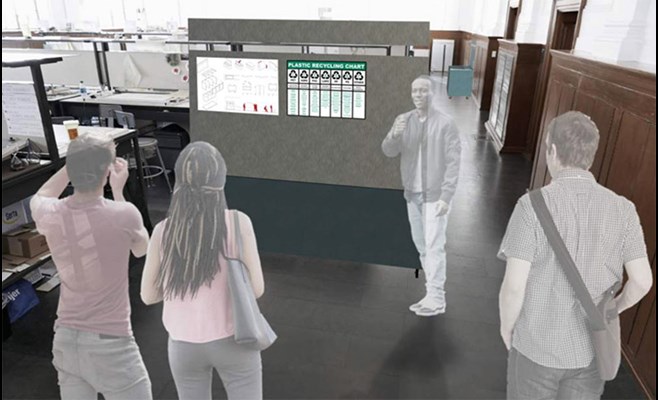 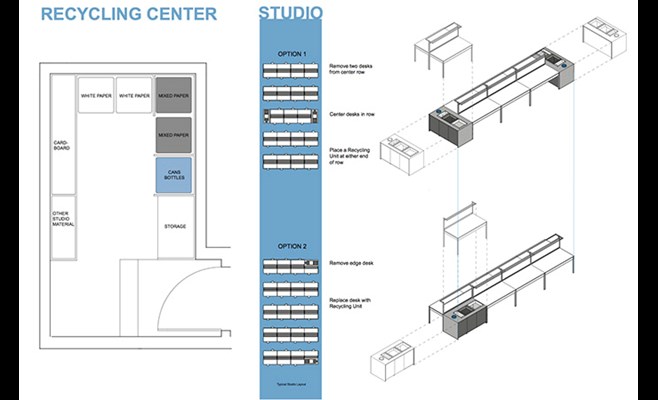 The Graduates project places recycling hubs inside each studio to ensure students see and use them. 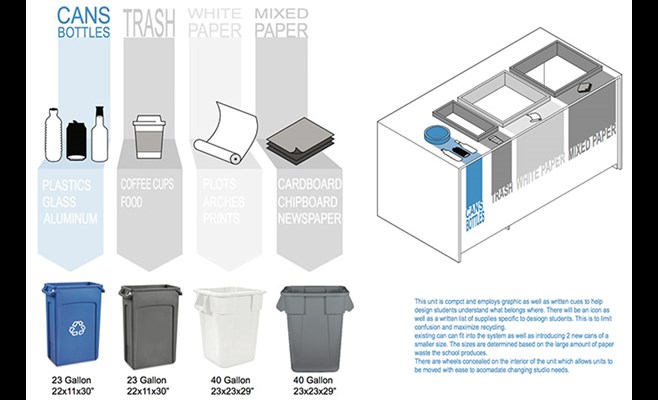 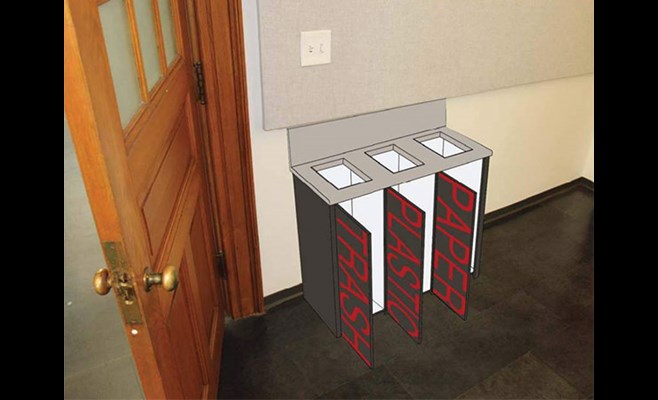 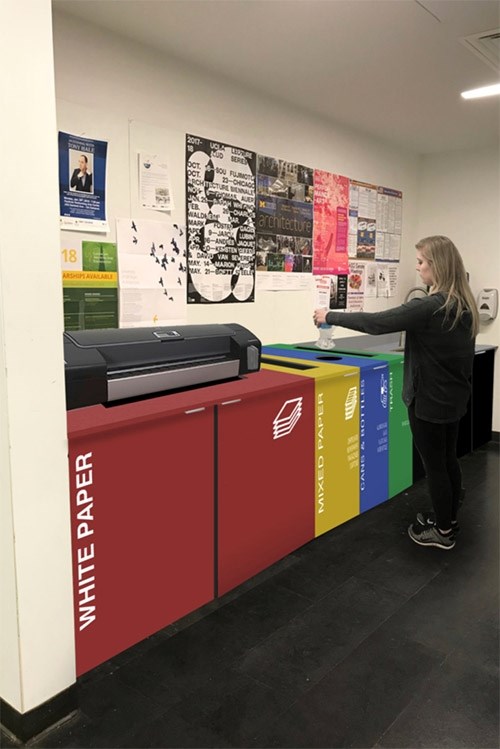 Courtesy of The Disposables team

The Disposables project uses a paper shredder in the student break room to measure how much white paper students are recycling and then rewards participating students through printing refunds. This project is the first-place winner of this semester's "RE: Fay" design competition held for students in the Fay Jones School of Architecture and Design.

FAYETTEVILLE, Ark. – The Fay Jones School of Architecture and Design started the spring semester with a student design competition aimed at generating ideas for recycling within the school.

"RE: Fay," an interdisciplinary competition, provided students with the opportunity to explore a vision for recycling in the Fay Jones School by incorporating recycling through design. And students helped develop the theme for the competition.

The University of Arkansas student organizations of the American Institute of Architects, American Society of Interior Designers and American Society of Landscape Architects had approached the school's administration about the need for a better recycling system in Vol Walker Hall, said Ken McCown, head of the Department of Landscape Architecture and competition organizer. McCown and school administrators decided the competition would be a good way to generate ideas in the process of developing an effective recycling system within the school.

"The recycling system in the building is not effective for us right now," McCown said. "It is a fixable problem — thus, that makes it good to explore."

The competition, held over the weekend of Jan. 26-28, challenged participants to collaboratively analyze information and respond with effective design concepts that made use of spaces in Vol Walker Hall — all within a tight timeframe. McCown said the students came up with wonderful ideas, ranging from pragmatic to visionary.

The participating teams had a maximum of four members and were required to have at least two disciplines represented from the architecture, interior design and landscape architecture programs. Students were also encouraged to form teams with students in different year levels. This allowed students to collaborate and look at designs from other points of view. Students had only 30 minutes to pull their teams together and give themselves a name.

Before the competition started, Eric Boles, director of the U of A Office for Sustainability, talked to students about recycling on campus and in Vol Walker Hall. During the competition, students had the opportunity to meet with campus recycling and sustainability representatives to discuss their questions.

The teams were given building plans and recycling system files, and they were tasked with exploring Vol Walker Hall to look for a recycling site, as well as analyzing the current state of recycling in the building.

"They found several viable ideas, including ones they had not considered," McCown said. "They are eager to move forward, and opportunities exist for students in the competition to work with them in realizing a better recycling system in the Fay Jones School."

Caleb Bertels, an architecture student, said he was surprised to see how inefficient the recycling program was in the building. He said the Fay Jones School should be at the forefront of sustainability and environmental awareness.

Corinne Burns, an interior design student, said design competitions like this one are important because they get students involved in decision-making at the school, which is essential because students use the building around the clock. She said the competition helped her become more passionate about recycling, not only in the Fay Jones School but also across the university campus.

Several student groups developed strong proposals during the competition. One team, The Disposables, decided to add student incentives through a partial printing refund for every square foot of recycled white paper. Another team, The Trash Talkers, came up with the concept of making convertible recycling hubs that can transform into a table workstation or a vertical pinup structure.

The first-place award went to The Disposables, which consisted of team members Burns, Kyle Beard (architecture), Conner Payne (architecture) and Abigail Redmon (interior design). Their project — Reduce, Reuse, Recycle, Refund — was awarded a $750 prize. Their project helps streamline the recycling process by putting the recycling in more centralized areas and getting students to shred paper themselves for a rebate, which cuts out a step for Razorback Recycling.

The second-place team was The Trash Talkers, which consisted of Bertels and Jacob Costello (landscape architecture). Their project, SETH (Sustainable Effort Task Hubs), was awarded a $500 prize. Their idea simplifies recycling within the school by placing the mobile, convertible SETH recycling units around the building, as well as relocating the recycling center — now tucked on the bottom floor — to a more convenient location.

The third-place team was The Graduates, which consisted of students Maranda Gerga (architecture), Meagan Leeth (architecture) and Heidi Matthews (interior design). Their project, which proposes reorganizing the recycling system by adding recycling stations to the studios, won a $250 prize.