University of Arkansas Researchers Recognized for Innovation in Rice Production 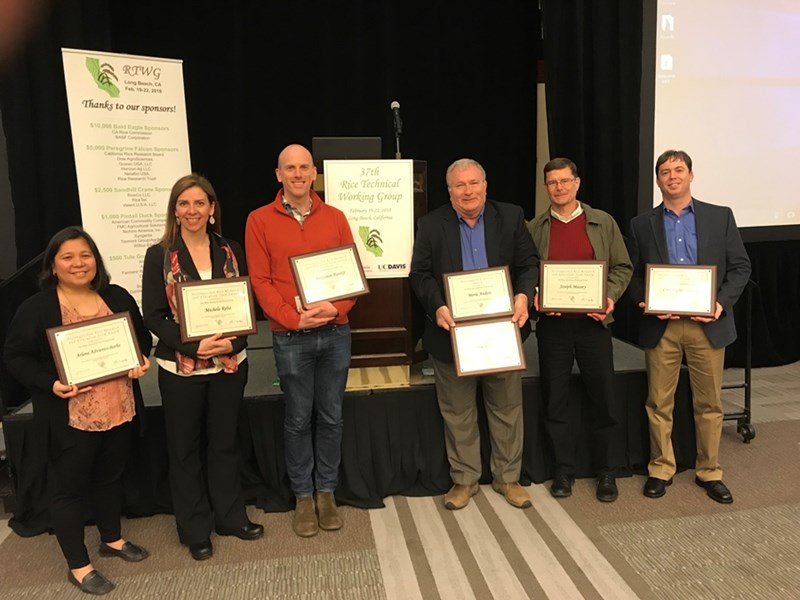 Farmers in Arkansas and beyond are looking for ways to grow rice more sustainably, and a team of University of Arkansas researchers was recently honored for their contributions toward that goal.

The team included University of Arkansas biological and agricultural engineering faculty and researchers at the U of A System­ Division of Agriculture, among others, and has been evaluating a method that challenges the traditional method of constantly flooding rice fields.

Flooding has advantages including weed control, efficient fertilizer use and high rice yields, but it's not a perfect system. The practice has areas that can be improved upon, including water use, field methane emissions and the concentrations of heavy metals in rice grains.

Instead, U of A researchers are evaluating an irrigation method of alternating wetting and drying of the rice, which can result in up to 30 percent less water use and 50 to 90 percent less methane production, all without impacting rice yields.

Ben Runkle, assistant professor of biological and agricultural engineering, said the research addresses a critical need in Arkansas and has implications around the world.

"Farming is a big part of the economy in Arkansas," Runkle said. "We're helping create and establish new rice production practices in Arkansas, so the average person's kids and grandkids will be more likely to live in an Arkansas with active rice production, and we may even be recovering groundwater sources that have been declining.

If we can do that for the next generation, that will be a powerful legacy," he said.

"We're committed to aiding growers in their efforts for increased sustainability in rice production through many avenues, including water management, to ensure the long-term viability of the rice industry in Arkansas," said Jarrod Hardke, rice extension agronomist.

The team, including the U of A's Runkle, Hardke, as well as Chris Henry and Merle Anders (retired), along with Michelle Reba, Joe Massey, and Arlene Adviento-Borbe with the USDA-ARS in Arkansas and researchers from California and Louisiana, earned the "Distinguished Rice Research and Education Team Award" from the Rice Technical Working Group at its bi-annual meeting in Long Beach, California in February. The RTWG is a collaboration of experts in rice production, including researchers, growers and industry representatives that meets every other year to discuss the latest in rice production.