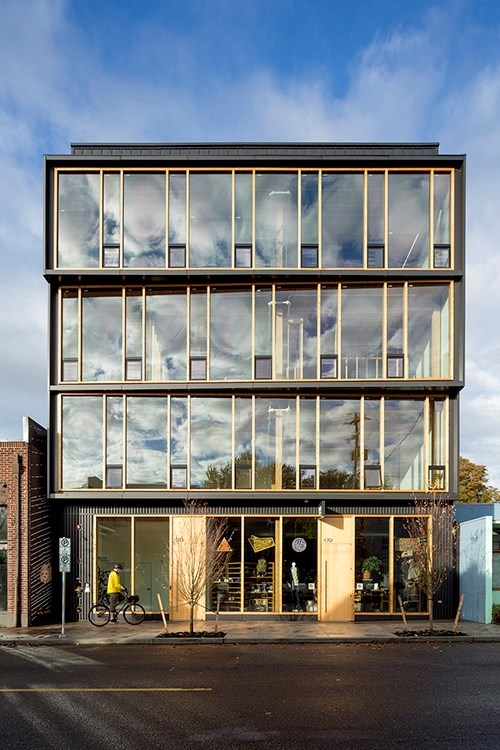 Albina Yard is the first building in the United States to be assembled with domestically fabricated cross-laminated timber as the primary structural element. The 16,000-square-foot, four-story office and retail center, completed in 2016, is located in Portland, Oregon.

FAYETTEVILLE, Ark. – Thomas Robinson will present a lecture at 4:30 p.m. Monday, March 12, in Ken and Linda Sue Shollmier Hall, Room 250 of Vol Walker Hall, on the University of Arkansas campus, as part of the Fay Jones School of Architecture and Design lecture series.

Robinson is founder and principal of Lever Architecture in Portland, Oregon. His practice is dedicated to the creation of buildings and spaces that elevate human experience. Robinson is pioneering the use of cross-laminated timber (or CLT) in the United States.

Robinson is a visiting professor in the Fay Jones School this semester, as part of the school's USDA Forest Service Wood Innovation Grant.

In his lecture, titled "Lever Architecture," Robinson will discuss his work, which is recognized for bringing architecture and innovation to everyday building types, and for connecting urban growth with rural economic development through the innovative use of regional materials. He will review the work his firm is doing, including first-of-their-kind projects using CLT and other next-generation wood technologies. He will discuss Albina Yard, the first building in the United States made from domestically fabricated CLT, and Framework, which is slated to become the first wood high-rise in the country. Framework is also a recipient of the U.S. Tall Wood Building Prize, awarded by the U.S. Department of Agriculture, in partnership with the Softwood Lumber Board and the Binational Softwood Lumber Council.

Some of Lever Architecture's other significant completed projects include student housing for the Pacific Northwest College of Art in Portland; campus planning and design for major entertainment companies in Southern California; and the L'Angolo Estate Winery in Newberg, Oregon.

In 2017, the firm was named to Architectural Record's Design Vanguard and the Architectural League of New York's Emerging Voices. The firm's work has been published in The Atlantic, The New York Times, Surface and Dwell, among others. It was recently featured in "Timber City," an exhibition at the National Building Museum in Washington, D.C.

Prior to founding Lever Architecture, Robinson led cultural and institutional projects for Allied Works and Herzog & de Meuron. He received a Bachelor of Arts in architecture from the University of California, Berkeley, and a Master in Architecture with Distinction from the Harvard Graduate School of Design.

The Fay Jones School is pursuing continuing education credits for this lecture through the American Institute of Architects.