U of A Alumna Leads Middle School Girls in Podcasting Venture 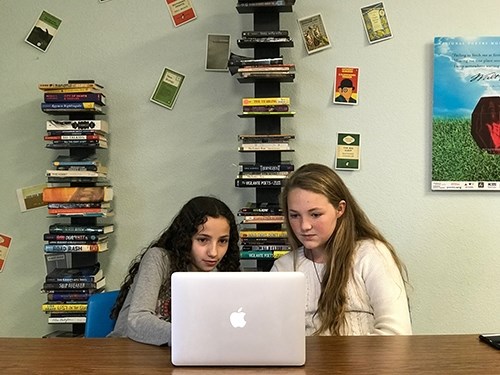 "The idea is to interview an inspiring woman about her job and everyday life," Dean said about the podcast called "All Girls Considered." "One thing I noticed that is not unique to this school is the girls were extremely competitive. There is a lot of in-fighting, and girls are not necessarily supporting each other. This was my first exposure to it as a teacher and I felt it was an issue. I was also dealing with a group of girls who had a lot of trauma and challenges at home, and they were bringing that to school with them every single day."

Dean, who earned a Master of Arts in Teaching in the secondary education program, said she wanted to create a space girls could come to just be girls, to support each other. She had experimented with a podcast in which she talked about people who inspired her and so decided to suggest the idea to the girls in her class.

Last year, the girls interviewed a director at the National Science Foundation, an Episcopal priest and a choir teacher in their building. Then they snagged an interview with Grace Bonney, a woman whose website and writing on interior design got her named by Forbes magazine as No. 1 in the home category on the magazine's list of top influencers. Dean thinks that's how the podcast got noticed and included in a recent New York Times feature on "Podcasts Made Just for Kids."

In the Bonney podcast, the girls ask the entrepreneur how she got started, how she made certain decisions in her business and why she chose certain directions. Bonney laughs with delight several times as she answers and compliments the girls on their insightful questions.

Abby said being a feminist means that she believes women deserve to be treated as strong individuals and not stereotyped.

"Some women aren't comfortable in their workspace because there are stereotypes all over the place," she said. "Grace Bonney has done so much. She's really inspired me to get up there and take chances and, hopefully, it'll work out."

And, although her beliefs are strong, Abby is keeping her options open as far as her own future.

"I know I'm very academic and artistic but I don't know what I want to do," she said. "I love writing."

The students also manage social media accounts for the podcast. They meet after school two days a week to work on the project and have learned the technology needed for the entire process of podcasting.

"They are learning so much from how do we share our ideas, how to communicate what we think and make connections with people who inspire us in some way, technology, computers, software, what's appropriate on social media and how to share effectively," Dean said.

In talking to women about their struggles and how they overcame them, the girls are learning, growing and developing leadership skills that will help them when they go to college and into the workforce, she said.

"They see themselves as being able to create positive change," Dean said.

Dean is creating a nonprofit organization based on the podcast project in order to provide opportunities for other schools to use the Leander model. She is developing a youth advisory board so girls can be involved in the organization's direction.