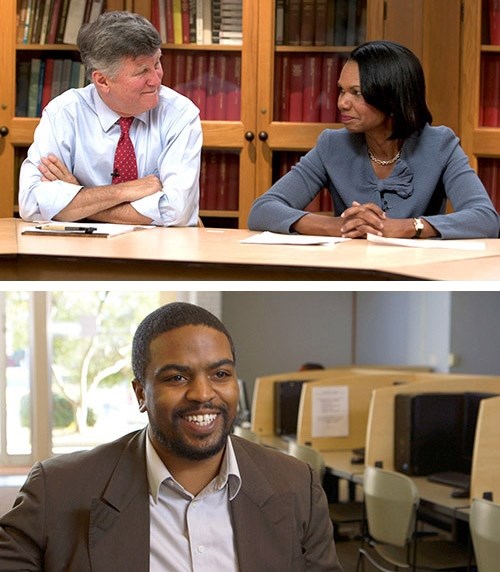 Top photo, David M. Kennedy, left, and Condoleeza Rice are featured in the film. Bottom photo, Arkansan Terrence Davenport, also featured in the film because of his work creating economic opportunity in the Delta, will speak in person before the screening.

American Creed, a documentary about working across divides to realize American ideals, will be shown from 5:15 to 8:15 p.m. Thursday, March 1, in the Gearhart Hall Auditorium on the University of Arkansas campus.

In this film, Condoleeza Rice, former U.S. secretary of state, teams up with Pulitzer Prize-winning historian David M. Kennedy in cross-partisan dialogue that frames the stories of diverse activists who are striving to realize shared visions of America's promise. Arkansan Terrence Davenport, a former U of A student who is featured in the film for his work creating economic opportunity in the Arkansas Delta, will provide a keynote address before the screening.

The screening is the first event of "Literacy, Equity, and the American Creed," hosted by the Brown Chair in English Literacy and Northwest Arkansas Writing Project. Additional events in this series include a screening of the documentary "Night School" on March 13 and a lecture by Deborah Brandt, author of Literacy in American Lives, on April 19.

Registration for the American Creed event is free and can be done online. The first 75 people to arrive for the event after 4:45 p.m. March 1 will receive a free book related to the film's topic.

American Creed is being released nationwide as part of a public engagement campaign to identify what unites people as Americans. This work will include community conversations, classroom activities and storytelling to foster a national conversation about American ideals and identity.

Through stories set in big cities, small towns and rural areas around the country, American Creed describes challenges facing Americans today, including creating economic opportunity and finding ways to meaningfully participate in civic life. The film encourages viewers to explore questions like "What should America's national ideals be?" and "How do we close the gap between ideals and reality?" American Creed is co-produced by Citizen Film and WTTW Chicago.

"We are thrilled to be hosting this event at a time when there is a heightened need to recognize what unites us as a nation," said Vicki Collet, associate director of the Northwest Arkansas Writing Project. "We hope the event and the discussions that it generates will be an influence for good in our community."

Collet is an assistant professor of childhood education in the Department of Curriculum and Instruction, College of Education and Health Professions

At the March 1 film screening, ideas for becoming involved locally will be discussed. These include Living Room Conversations and Sworn Again America. National Writing Project is supporting the American Creed Youth Publishing Project, where students can post their response to the film and the work it promotes.

A trailer of the film, American Creed is available here. Questions about the March 1 event can be directed to Collet at collet@uark.edu.