White Honored by Ohio State for Work in Engineering Education 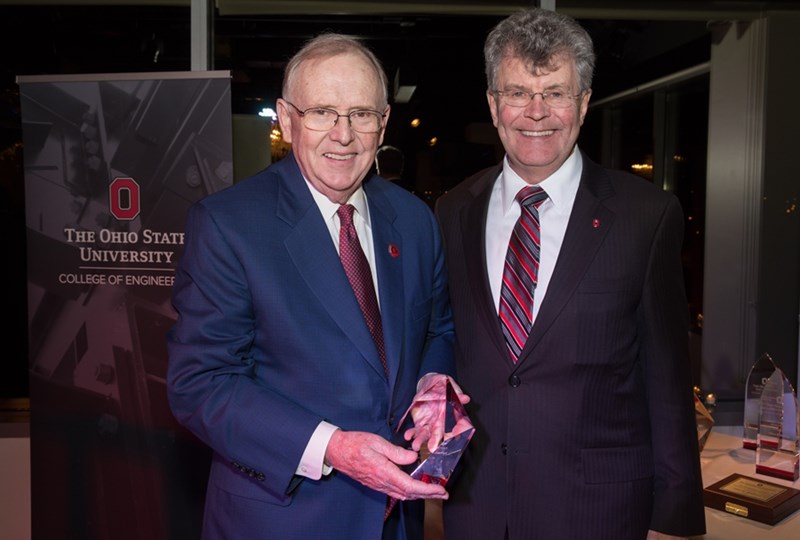 John White with David B. Williams, dean of engineering at Ohio State University.

John White, distinguished professor of industrial engineering and chancellor emeritus at the University of Arkansas, was honored recently with a Distinguished Alumni Award from the College of Engineering Education at Ohio State University.

An alumni of Ohio State's doctoral program, White was honored for his contributions to the advancement of engineering education.

The recognition marks the second Distinguished Alumni Award White has received from OSU. The first, in 1981, was from the Department of Industrial and Systems Engineering.

The Distinguished Alumni Awards were established by the faculty of the College of Engineering at Ohio State University to recognize distinguished achievement on the part of alumni in the field of engineering or architecture by reason of significant inventions, important research or design, administrative leadership or genius in production.

A member of the National Academy of Engineering, White has held professorial appointments at Virginia Tech (1970-75), Georgia Tech (1975-97) and the University of Arkansas (1997 to present).

He served as assistant director for engineering at the National Science Foundation from 1988 to 1991, dean of engineering at Georgia Tech from 1991 to 1997, and chancellor of the University of Arkansas from 1997 to 2008.

White received a bachelor's from the University of Arkansas, master's from Virginia Tech and doctorate from Ohio State, all in industrial engineering. He holds honorary doctorates from the Katholieke Universitiet of Leuven in Belgium and George Washington University.