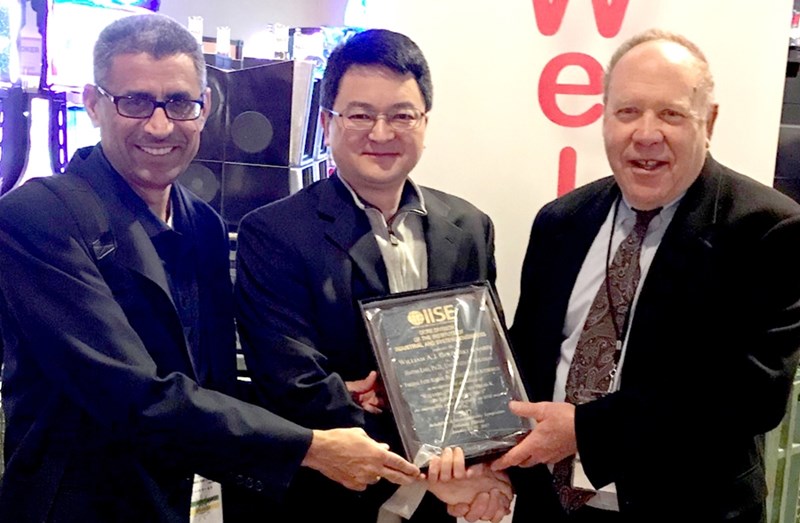 Dr. Haitao Liao, center, receives an award for his research at the Reliability and Maintainability Symposium.

Industrial Engineering Professor Haitao Liao was honored in January at a gathering of international experts for his research on the reliability of electrical insulation materials.

The award was presented at the annual Reliabilty and Maintainability Symposium (RAMS) in Reno, Nevada. RAMS is a yearly gathering of the product assurance disciplines where training, tutorials, and the latest technical practices, procedures, and results are presented in easy-to-use forums and proceedings.

The Golomski Best Paper Award honors an outstanding paper in the proceedings at the symposium, authored or co-authored by a member of the Institute of Industrial and Systems Engineers (IISE). Liao has been a member of IISE for 16 years. He served as president of IISE Quality Control and Reliability Engineering Division in 2014, and currently serves as an associate editor of IISE Transactions.

Liao's paper is titled "Reliability Study on High-K Bi-layer Dielectrics." In this paper, time-to-breakdown of high-k bi-layer dielectrics is studied, and a marked space-time self-exciting point process is employed in modeling defect generation rate. An optimization algorithm is developed to minimize the divergence between the empirical distributions of real and simulated data. The new approach provides a useful tool for predicting the total time-to-failure of high-k bi-layer dielectrics.

Joining the faculty of the Department of Industrial Engineering in 2015, Liao holds the Hefley Endowed Chair in Logistics and Entrepreneurship. His research interests include reliability models, maintenance and service logistics, prognostics, data analytics, design of experiments, and probabilistic risk assessment. In his research, he focuses on the use of theory of probability, statistics, operations research, signal processing tools in reliability estimation and improvement of highly reliable products, and optimization of service and operation of engineering systems.