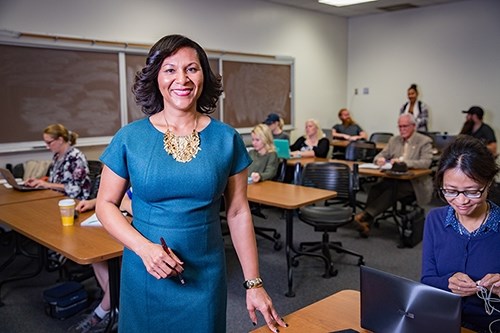 The College of Education and Health Professions has named Stephanie Lusk, a University of Arkansas assistant professor of counselor education, as director of diversity for the college. Lusk will add this new role within the college to her continuing faculty duties this month.

Lusk plans to begin with a needs assessment of the college in order to identify opportunities for growth as well as highlight outstanding practices currently being implemented. She will gather faculty and staff members as a working group that will put an action plan together.

“The College of Education and Health Professions is unique in that it offers a number of degree programs that are generally attractive to female students,” Lusk said. “Individuals with degrees in teacher education, nursing, communication disorders are in high demand, but they are especially absent in many areas such as rural communities and inner cities. The college can help meet this demand by recruiting and graduating males with these degrees. In doing so we are working toward not only diversifying our college, but we are helping to diversify these professions as well.

“While I think it is important for us as a college to recruit males, I also feel as if we must also look at diversity more broadly, beyond race and gender, and consider culture and religion even,” she continued. “We should be at the forefront of inclusion for all groups of individuals.”

"Diverse research agendas better position us to become and remain leaders in our fields, but they can also serve to recruit graduate students who are diverse in a number of ways," she said.

"Additional expansion in this area helps to further strengthen us as a unit," she said; for example, she developed courses in substance use and addictions in the rehabilitation counseling program that were not available previously. "My background is in disability," said Lusk, who joined the U of A faculty in 2012. "Many people don't think of disability in terms of diversity, but it intersects all groups thus creating additional nuances or slight variations in how diversity is expressed and experienced in any one individual."

Looking at the world beyond the Westerner's perspective may be useful, Lusk said.

"I've had the opportunity to engage in international projects that have broadened my world view and understanding of diversity," she said. "The integration of cultural and religious values within the campus environment can reap huge benefits as well.

"I think we can create an environment within the college - and ultimately the university - that is open and inclusive, where people are comfortable being exactly who they are," she continued, "and in this, we reduce stigma and break down barriers that divide."

She also plans to work with other resources on campus.

"I'm excited that the chancellor considers diversity a priority and has included it as a 'Guiding Principle'," she said. "I am also looking forward to working with Dr. Yvette Murphy-Erby who is now the Vice Provost for Diversity and Inclusion. There is a commitment at the top, and other people are in place across the campus to assist with this endeavor."

Lusk has been teaching for 15 years and has managed groups and teams. She believes the skills of organization and problem-solving she has developed through her years of consulting, teaching and working on research projects will be useful in this new role.

"There is so much potential with this new position, and I'm excited to see where it leads," she said.