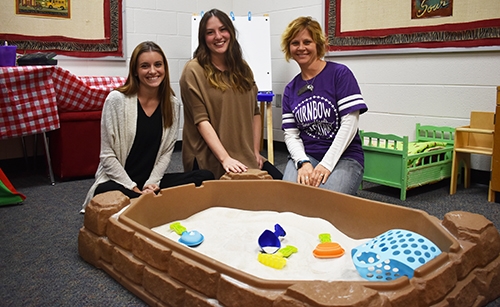 Children receive counseling services they otherwise would not get, University of Arkansas graduate students gain practical experience working with these children, and faculty members conduct research that shows the local impact of play therapy on academics, classroom behavior and attendance.

It's a win all-around.

Kristi Perryman, assistant professor, started a play therapy program at the U of A in 2015, a year after she joined the College of Education and Health Professions counselor education faculty. This is the second year her students have spent time as interns at Turnbow Elementary School in Springdale. They work under the guidance of Perryman and supervision of Sarah Gheen, a U of A alumna who has been the professional school counselor at Turnbow for four years.

Ellen Bennett, a counseling master's student, said that, when she studied play therapy in class at the U of A, she found it inspirational and thought it sounded fun. Now, she sees the results and understands its importance as an option for children who may be too young to benefit from talk therapy.

"Play is children's language," Goodson said. "They use toys instead of their words to express what they are going through developmentally."

Gheen said she screened Turnbow students about four weeks into the fall semester with a questionnaire based on four categories: behavior control, task orientation, peer and social skills, and assertiveness. Children who score within a certain range are identified for play therapy sessions in one of several playrooms at the school. These are not children with intensive mental health needs but rather those at risk for intensive need.

Children lead the play therapy sessions, in order to gain self-control and confidence, the U of A students said.

"If they ask a question, instead of answering, we say, 'You get to decide,'" Bennett explained. "We track their behavior and reflect either the content (of what they do) or their feelings or both. We want to be in their world."

Therapeutic toys are specifically chosen for the playroom according to themes. Toys the children choose to play with and the way they play with them can signify certain feelings, Goodson said. For example, a "bop bag" lets a child take out aggression in an appropriate way. Playing with dolls can show a need to nurture or be nurtured.

The playroom represents a safe place for children to exercise their own voices, Gheen said. Most everywhere else in school, children are told what to do, she said. Limits are set as needed to protect the child, the therapist or the toys and room. Through this process, children learn self-control and self-direction, according to Perryman.

Both Bennett and Goodson plan to pursue certification in play therapy. Bennett is on the school counseling track in the master's program, and Goodson is on the mental health track. The counselor education program offers coursework to prepare students for the certification process through the Association for Play Therapy as part of their master's program. Other mental-health related master's students, such as those studying social work, may also complete these courses.

This year, Perryman is also working with Lisa Bowers, an assistant professor of communication disorders. They received a grant from the provost's office to implement the program. From the first year's data, they had noticed that 22 percent, or 8 of 26 students, who qualified for the counseling sessions also qualified for speech services so this year one of Bowers' graduate students worked as an intern at Turnbow.

The services being offered at Turnbow are part of the Primary Mental Health Project, a national evidence-based program implemented in the school setting to help children in pre-kindergarten through third grade adjust to school, gain confidence and social skills, and to focus on learning. Through play, the project addresses some children's difficulty adjusting to school and increases their chances for success.

Child-centered play therapy, which is used in the national program, is the type most developmentally appropriate for working with elementary students because it does not rely on verbalization on the part of the child to heal, Perryman said.

"It's also the type of play therapy that has been the most researched and established as an evidence-based, empirically validated approach for working with children between the ages of 2 and 12 with behavioral and emotional problems," she said. "We know its benefits include increased verbal expression and expression of feelings. Giving children choices to lead the sessions helps them gain self-control. Like therapy for adults, child-centered play therapy helps children come up with their own solutions and be able to use them outside the play therapy situation. The entire process is based on the relationship the therapist builds with the child, and the children change as a result of that relationship."

The Primary Mental Health Project is based on prevention, not treatment, Perryman said.

"The preventive aspect is crucial as many programs address behavior and academic issues once they have become major problems for the student, and often times, for the school," she said. "That's the important part of this: we see kids raising their scores and improving attendance, and we have to assume that, without the play therapy, the areas assessed could have become much worse. The fact that they significantly improved is really important."

More than 50 percent of the student population at Turnbow is diverse, primarily Spanish-speaking people and Marshallese, and about 80 percent of the school population qualifies for free or reduced-price lunch, Perryman said. Therefore, these services also served a diverse population of students.

Children were screened by the classroom teachers and the school counselor to assess classroom behaviors, academics, and attendance both before and after the 10 sessions of play therapy.

"We want to see the numbers go up," Gheen said, "but there are also concrete things teachers say that show the play therapy is effective."

Teachers said very quiet children speak up more in class, participate more in other ways and show improved interaction with other students, she said.

Perryman and Bowers are working on two journal articles about the data so far. Previous research has not looked at programs that used student interns, Bowers said. Research that looks at the correlation between academic performance and mental health is also a new aspect of the U of A research.

The Office of Play Therapy Research and Training offers a summer conference each June with internationally known play therapy speakers, in addition to the regular coursework. Rick Gaskill, Ed.D., who teaches in the play therapy program at Wichita State University, is next year's speaker for the event on June 22 and 23 that will offer 12 continuing education units. His topic will be neurosequential play therapy. Gaskill is clinical director and deputy director of Sumner Mental health Center in Wellington, Kansas.