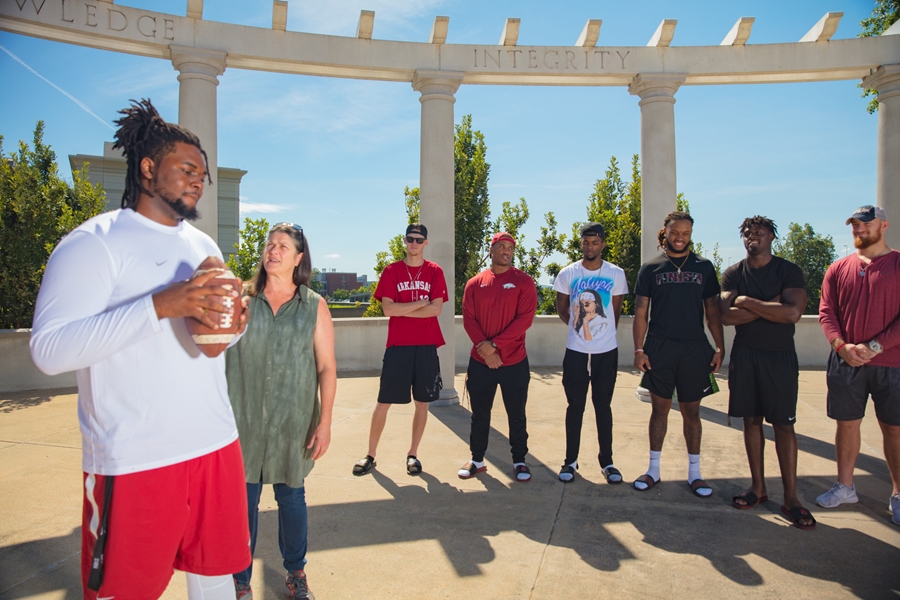 Department of Theatre's Kate Frank works with students in her Alexander Technique class.

"Neck free. Head forward and up. Back long and wide."

The directions repeat silently in Will Gragg's mind, anchored by the sheer amount of repetition in his Alexander Technique class. The tension in his back releases, his right arm comes up, and his next throw is easier, the football spiraling through the air into a classmate's waiting hands.

"What's the difference?" instructor Kate Frank asks the other Razorback student-athletes gathered around Gragg on the stage of the Chi Omega Greek Theatre, watching as the tight end throws the ball. 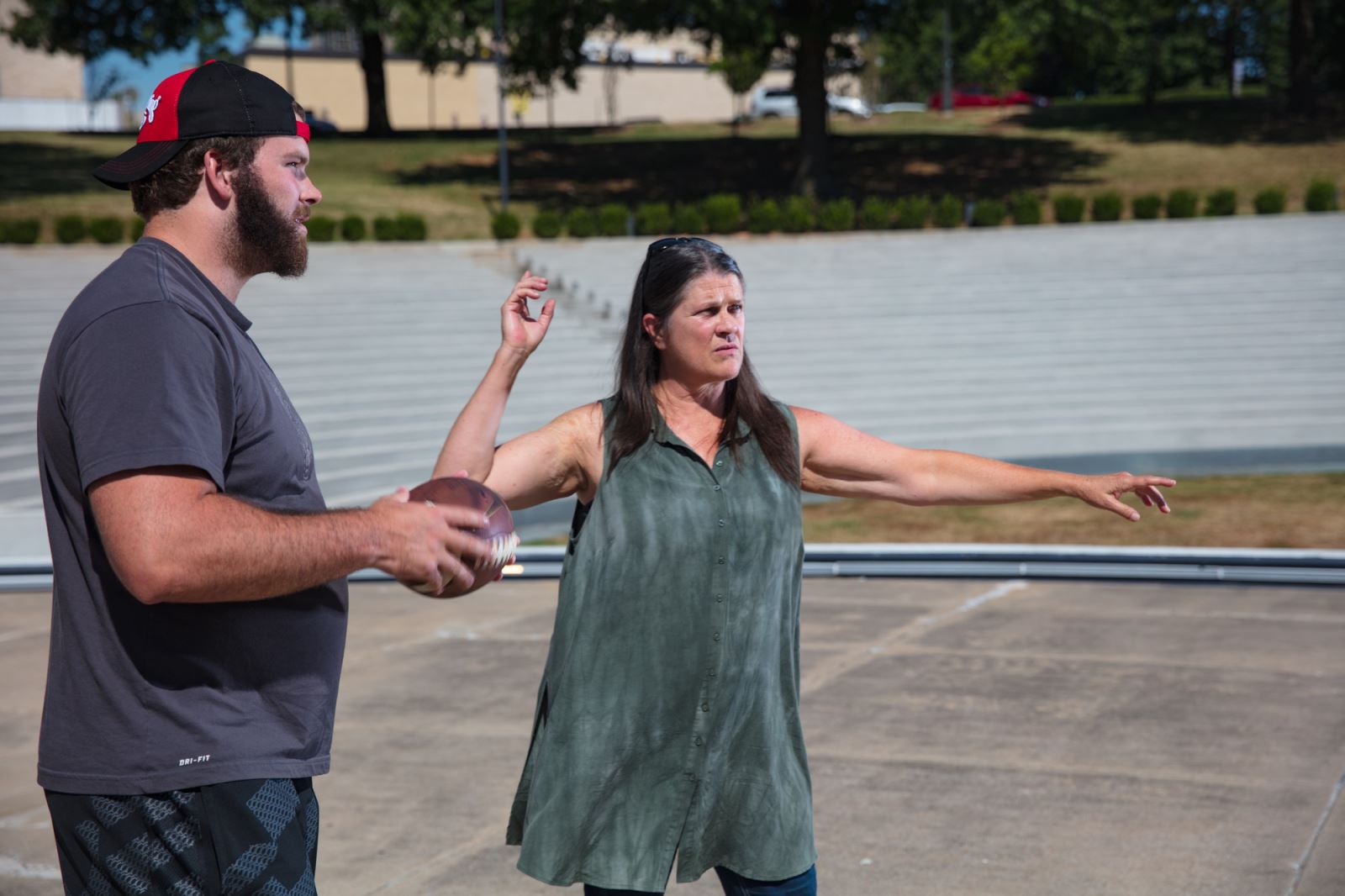 This is the first day that class members have applied the technique to their sport, but they've been increasing body awareness throughout the five-week session, meeting as a group and individually with Frank.

Offered by the Department of Theatre in the J. William Fulbright College of Arts and Sciences, Frank said the Alexander Technique course helps students unlearn harmful habits and free their bodies to move more comfortably.

A required course for graduate acting students, the class is also popular with undergrads — including a growing number of student-athletes.

That makes Frank and other teachers of the Alexander Technique happy, as she said she wishes the technique were more widely known. Developed in the 1890s by F.M. Alexander, an Australian actor who struggled with chronic laryngitis, the technique is taught mainly in music conservatories and theater programs.

Yet Frank said it can be helpful for people in all walks of life. A 2008 clinical trial reported in the British Medical Journal found that the technique offers long-term benefits for chronic or recurring lower back pain. The technique is also recommended in the U.K. for people with Parkinson's.

"You can use this sitting at your computer," said Frank, who has been teaching in the Department of Theatre full time since 2006. "It's not just for actors or athletes. It really is for everybody."

The technique helps people become aware of habitual patterns of tension that interfere with their freedom of movement, she said.

"Not only is our habitual tension making us work too hard, adding pressure that doesn't need to be there, but it can actually be dis-coordinating," she said. "This is where it really helps athletes and musicians and actors. Because this little unnecessary thing they might be doing could be interfering with what they're trying to do."

Frank noticed that Jake Heinrich, another football player in the class, jerked his head slightly when he released the ball, for example. She placed her hands briefly on his shoulders and then on his neck, her thumbs at the base of his skull and her fingers resting on the sides of his neck.

The physical guidance she gives is so gentle it is nearly imperceptible. The goal is not to teach new positioning of the body but to release unessential tension so natural movement can be freed. Students learn to pause and inhibit their habitual responses. Verbal cues help redirect energy so that effort is distributed more evenly throughout the body.

"What we're doing is removing the interference and allowing the natural thing to happen," Frank said. She likened the head to a 12-pound ball sitting on a shelf. The technique trains people to direct that weight to move up and off their vertebrae, releasing unnecessary pressure and allowing the spine to lengthen.

"You are using your effort in a more efficient way," she said, "which usually translates as a feeling of ease in movement. A lot of people will say they feel lighter or that the movement is less work."

Heinrich said the most important lessons he will take from the class are the use of inhibition, or knowing that he can choose to stop and not do; the directions, or self-talk realigning the body; and the overall concept of self-awareness.

"Thanks to simply paying mind to these basic principles, I move better, I feel healthier, and I think more clearly," he wrote in an end-of-semester reflection paper.

Frank said many athletes describe similar benefits, often to their own surprise.

"They come in not quite knowing what they're getting into," she said. "But they usually get a kick out of it.

"The first day of class, when I introduced the idea that the head leads and the body follows, a student said, 'Bam!' And I said, 'Is that a good thing?'